A plan to redevelop West 25th Street between the bustling activity centers of the West Side Market district and the MetroHealth campus is nearing its final stage, the Greater Cleveland Regional Transit Authority (RTA) reported at a public meeting last Thursday, Feb. 25.

RTA is leading the 25 Connects: A Transit Oriented Development plan that would replace its current #51 bus line with a bus rapid transit line (BRT)—if it wins a Federal Transit Administration (FTA) grant to do so—that would connect riders on Cleveland’s West Side to downtown and MetroHealth.

“We can create great connective tissue on West 25th,” says Maribeth Feke, director of planning at RTA, adding that RTA has prioritized the West 25th Street corridor because it is the second busiest line in its system in RTA system—with 5,400 daily riders.

RTA indicated it may thread the needle on how much infrastructure gets built on West 25th Street, which could end up being a hybrid of its two existing BRT lines. 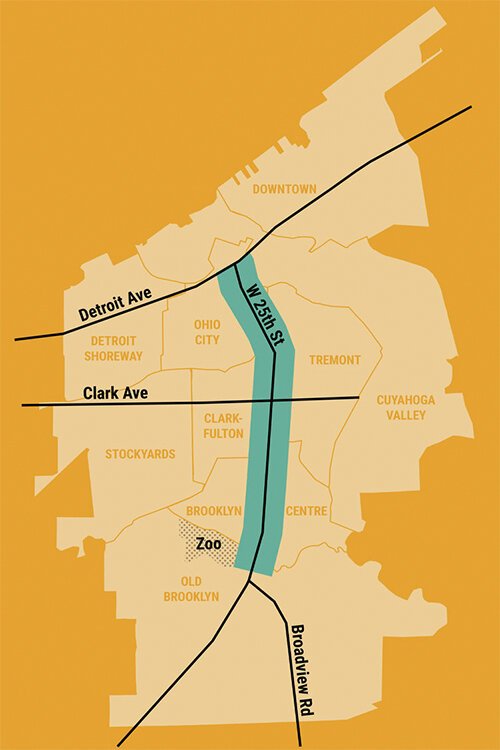 The project area extends along W. 25th Street from Detroit Avenue on the north to The Cleveland Metroparks Zoo on the south.The agency led the massive redesign of Euclid Avenue with the $220 million HealthTech BRT line—with its dedicated bus lanes and center boarding stations in 2008—and the $20 million 2014 rebuild of Clifton Avenue that includes rush-hour-only BRT lanes, new stations, and buses within Cleveland and Lakewood with underwriting from Cleveland State University.

“We’re talking about dedicated transit lanes during peak hours, so that the bus can operate more efficiently,” says RTA consultant David Dixon, who adds that at least 50% of the corridor would have to include dedicated bus lanes for it to qualify for the highly competitive FTA New Starts program funding.

CMHA Lakeview Terrace resident and Seventh Hill consultant Diane Howard spoke last week of the need to improve safety for the #81 bus riders, including the “650 residents that live [at Lakeview Terrace and are] fighting for better transportation, for better bus stops. We’re the ones who live at the bottom of this hill.”

For local nonprofit developer Ohio City, Inc., it is crucial that the 25 Connects vision includes housing that is affordable for those who want the option of transit within walking distance.

“We have really high transportation costs in the region, says Ohio City, Inc. executive director, Tom McNair. “If we can lower that household burden and make [transit] friendly by speeding up that line to make it accessible, that is incredibly important.”

It will be another needle to thread, with the high-end townhomes and condominiums under consideration for the land adjacent to the corridor.

“We have to redouble efforts to keep households in place, to keep affordable housing in place because that is equity and BRT is a big part of that,” says Dixon. “There are 4,000 units of vacant homes [in the area]. Just reactivating and reoccupying those would help immensely in the BRT efforts.”

The 25 Connects plan goes to the RTA Board of Trustees for approval on Tuesday, March 23 and before the Cleveland Planning Commission in April. RTA estimates it will begin engineering and construction documents in 2022 and begin construction in 2025, pending funding approval.