We are seeing more and more internet companies jumping into the deep end of the auto-tech industry. These companies are rapidly capitalizing on or venturing into the trillion-dollar electric vehicle (EV) sector, disrupting oil’s dominance in transportation and fueling the emergence of what IHS Markit Vice Chairman Daniel Yergin referred to as the “New Triad” – the convergence of the electric car, ride-hailing and car-sharing services, and self-driving autonomous vehicles.

Two weeks ago, speculations of both Apple and China’s Internet giant Baidu launching their self-branded electric cars created a major buzz in the market. In this short period of time, Apple and Baidu stocks climbed 6.5% and 19% respectively as enthusiastic investors recognized the growth potential of EV.

Citing people familiar with the matter, Reuters reported that Apple is targeting the production of a new electric vehicle by 2024, while Baidu is looking at either establishing a majority-owned venture with an automaker or becoming an automaker itself. The agency added that the Chinese search engine company has held preliminary talks with automakers including Geely, GAC and FAW’s Hongqi on a possible venture.

As the electrification of road transport gathers unprecedented momentum, the trend is promising some of the most exciting opportunities of the next decade and would come to define the future of mobility. This is especially true for China’s digital giants, which are set to dominate in-car connectivity operating systems and develop the industry standard, according to a 2019 McKinsey report.

Baidu’s initiative would be a step up from its peers such as Alibaba, which has developed Zhiji, an electric car startup joint venture with SAIC Motor, or Tencent, which partnered up with Foxconn and China Harmony to start producing smart electric cars.

Apple’s journey in developing a self-driving car was encapsulated in its embattled Project Titan launched in 2014. After going through leadership changes, strategy setbacks and employee layoffs, the project shifted a new course in 2016 and prioritized the development of an autonomous driving system over the development of an electric vehicle – until August 2018, when Tesla engineer Doug Field was rehired, leading to speculations that Apple might end up making a complete car.

Now, news of the tech giant potentially putting a passenger car equipped with its own breakthrough battery on the market in 2024 has sent investors into a frenzy.

What Baidu’s EV Venture Could Mean

As for Baidu, apart from diversifying income streams from its core search business, analysts believe the Chinese tech giant’s potential entry into the EV market could help it augment and expand existing applications.

“It’s all about building a sustainable ecosystem and synergies between its existing products and services,” Richard Wang, a senior analyst at the Gasgoo Auto Research Institute told Pandaily.

“Through owning the manufacturing and post-production process, Baidu would be able to aggregate data and information including user lifestyle habits, consumer behavior, product feedback and automotive trends, which can help prompt more effective improvements and assessments on products as well as expand the company’s online offerings,” Wang said.

Right now, Baidu, which is likened to China’s Google, does not make its own cars but has been rapidly developing Project Apollo, one of the world’s largest and most diversified open autonomous driving platforms, and heavily investing in Chinese EV startup WM Motors since 2017.

It also operates the autonomous robotaxi service, Apollo Go, in Beijing, Changsha and Cangzhou, and plans to expand to 30 cities in three years. Earlier in December, Baidu was also given the green light to carry out robotaxi tests without safety drivers in Beijing, marking another milestone for the company.

In an operation report released in early December, the company said it has integrated 5G-enabled teleoperation into its Apollo fleet, which has tapped 27 cities and driven for over 7 million kilometers in road testing. Just last week, it received five Level 4 autonomous driving testing licenses from the Nanjing municipal government, the first batch ever issued by the city.

Baidu’s committed role to AI research since 2010 has certainly given it an edge over its competitors to become a major disruptor in the traditional automotive industry.

As Wedbush analyst Dan Ives said to Barron’s, “This is a matter of when, not if, Baidu gets into EV production, given the massive pent up demand in China.”

With its more than 9,000 published AI-related patent applications in China – the highest in the country – Baidu Brain has developed more than 270 core AI capabilities, while PaddlePaddle, the largest open-source deep learning platform in the country, services 84,000 enterprises.

Its Kunlun and Honghu AI chips are among the highest performing AI chips and are built for a wide range of scenarios. Baidu Cloud is China’s leader in public cloud and AI cloud services with more than ten data centers across the country. It is also the only Chinese company to have launched an automotive cybersecurity lab.

All of the above AI infrastructures allows Baidu to lead the transformation of different industries, and its venture into the EV sector is “a natural development,” Wang said.

He believes that the company is likely to partner with an established vehicle manufacturer to tap into the EV opportunity, rather than building its own mass-market electric vehicle.

Didi has more than 550 million registered users and 31 million drivers, from whom it collects data to help develop the vehicle.

“Baidu has already dipped its toes in the automotive market with its heavy investment in WM Motor. There’s no need for Baidu to go through the pains and troubles of manufacturing and managing the requisite supply chain of a whole new auto business,” he said.

Turning a sustained profit making cars is extremely difficult, even with an abundant amount of resources and cash. It took Elon Musk’s Tesla 17 years, just to make an example. NIO, the first Chinese EV company listed in the US, is still losing money since its founding in 2014 and was on the verge of bankruptcy in November 2019 before Tencent lifted it out of a financial abyss.

“Baidu might be partnering with an EV manufacturer and offering its big data and deep learning research in return for design expertise,” Wang said.

Teaming up with an established auto maker in a joint venture could help Baidu develop and improve its robotaxi fleet at a more efficient pace by receiving data and feedback from operators directly, he added.

“There are no doubts about the sophistication of Baidu’s Apollo operating system – in terms of technical capabilities in software and hardware,” Wang said. “Its high-definition mapping and AI expertise are likely to give the company a big advantage in the new electric-car venture.”

The Chinese government has included autonomous cars as one of the key sectors in its ‘Made in China 2025’ initiative, which aims to transform the country into a leading manufacturer of high-end, innovative products.

The government hopes to see 30% of cars sold by then to have smart connectivity and has been providing extensive policy support to the EV sector, including tax subsidies, license plate laws, and registration benefits.

Baidu’s entry could mean faster EV penetration in China is on the way, Wang said.

“Baidu could accelerate the shift to the electrification of the auto industry. In the next three to five years, we expect to see many Internet companies entering joint ventures and offering mobility services that would cater to very specific customer segments. This could also prompt investors to hold a more optimistic outlook about the industry overall,” he said.

Rumors of Baidu entering the electric car market has definitely captured the attention of investors in the auto industry and perhaps even of Chinese consumers, who are relatively willing to experiment with new digital products and might be keen to try out a new ride-hailing experience.

Although some expect bumps on the road, it still appears that Baidu has chosen the right time to expand its ambitions and transform into an autonomous driving powerhouse in an industry that is undergoing a revolution. 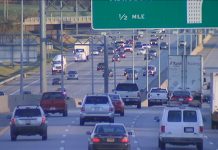 Honda Should Electrify a New S2000

New I-5 bridges over Puyallup River in Tacoma include longest-ever beam – KING5.com