There are updates, and then there are updates; and the new MacBook Air for 2019 is more iPhone XS than Mac Pro 2019. Not all that much has changed since the previous generation – which isn’t necessarily a problem, because (like the XS) it’s still an excellent device, but it’s unlikely to tempt many one-year upgraders.

Note that the MacBook Air 2020 is here and we’ve updated this review to reflect this. Read on to find out whether you should still buy this older model. Spoiler: Although it can sometimes be a bargain to buy an older generation, this is not one of those situations.

The MacBook Air is a true Goldilocks of form factors. The 13in screen and full-size keyboard feel big enough to work on pretty comfortably – the trackpad is enormous, too, as we’ll discuss in a moment – but it’s contained within a chassis that’s slim (4.1mm at the thinnest point) and portable (1.25kg). The MacBook Pro is comparatively bulky, and the (now discontinued) 12in MacBook can feel cramped, but this is just right. 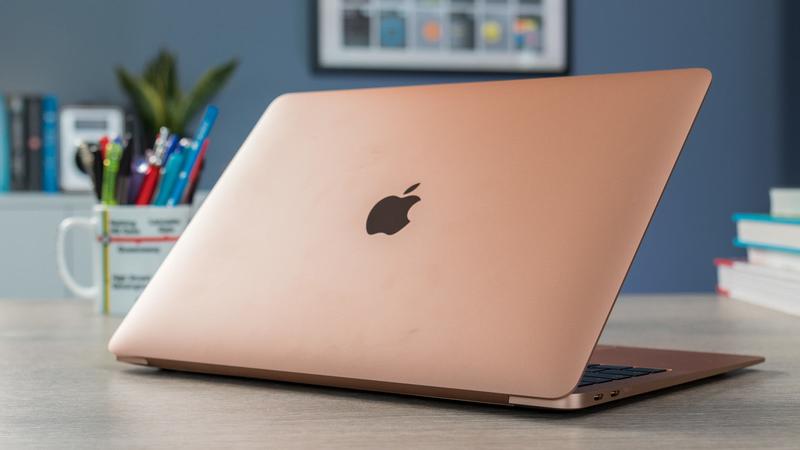 The Air comes in silver, gold and Space Grey. The latter is particularly smart, but we’re also fond of the gold finish which we tested. As is standard on Apple products, we’re talking about a bronzey, reddish-gold that’s easy on the eye.

Now, this will be of interest only to those contemplating an upgrade from a recent MacBook model, but it’s worth noting that all of the above is the same as the 2018 model. In classic Air fashion, the lines are sleek and minimalist and the lid opens with exactly the right amount of pressure, but Apple hasn’t updated the design at all – except for the keyboard, which we’ll talk about next.

Apple, that creature of habitual mystery, has been coy about the changes it’s made to the 2019 Air’s keyboard, and about whether or not it’s different from the keyboard in the 2019 Pro – the firm refers to it only as “the latest-generation keyboard”. This has left prospective buyers wondering if Apple has managed to fix the numerous problems that have bedevilled the keyboards on all three MacBook models in recent years.

The company has confirmed that the 2019 keyboards contain “new materials”, but this is a tweak to the butterfly mechanism rather than the wholesale return to the old scissor switch style that has been predicted for the near future. The scissor keys take up more space but have deeper travel and better feedback when typing.

The irritating tappy noisiness of past generations has been noticeably toned down, and (presumably linked to this) the keys feel softer to type on. Whether the modifications will translate into a cure for the ddouble-lletter inaccuracies that users reported with previous generations remains to be seen, but our sample at least has shown no signs of the issue during our time with it. And it’s reassuring to note that Apple has extended its keyboard repair program to include the 2019 MacBook Pro and, now, the 2019 Air.

On the downside, we will note that the arrow keys are still squeezed into a tiny space, with almost no space between the keys to guide the fingers (and literally none between the up and down keys!). We sorely miss the more spaced-out arrows on our 2015 MacBook Pro. The keyboard, in general, is quite cramped and typing accuracy is poorer than on a more expansively laid-out keyboard, although this gets a little better with practice.

ALSO READ  History repeating itself: Apple could learn from Microsoft’s past 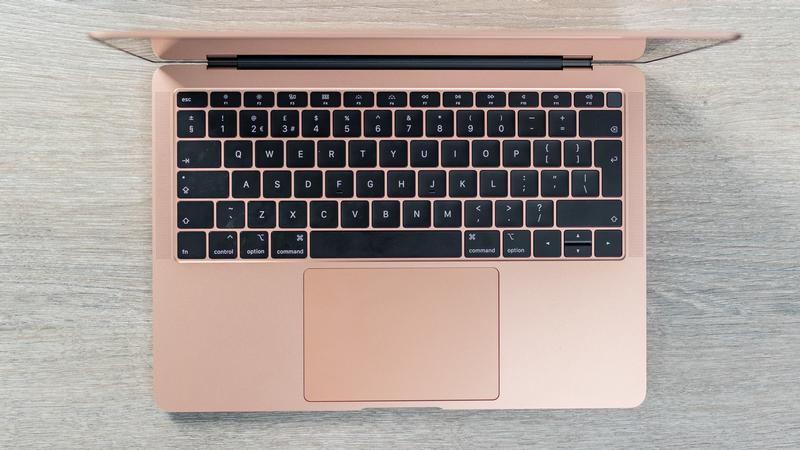 The trackpad is immense – 8.2 x 12cm – and offers the additional benefits of Force Touch, meaning you can do deep presses to trigger secondary functions such as dictionary lookups on words. It should also be more reliable than a conventional trackpad because it has fewer moving parts: it doesn’t actually click downwards, instead simulating a click with a small haptic buzz.

Finally, the Touch Bar still hasn’t made its way across from the MacBook Pro but there is a Touch ID fingerprint sensor next to the F12 key (again, this is not a new feature for the Air line). This is terrifically useful for login, as ever, with one extra benefit that you wouldn’t experience with Touch ID on iOS devices: you are automatically logged in to the correct user account when you tap down a finger.

However, we haven’t yet been able to replicate an additional neat feature that we observed on the 2018 Air and, previously, on the 2016 Pro. On those devices, if you tried to tap in straight after startup, or at any other time when a password rather than a fingerprint was required, Touch ID would do the next best thing – it would bump you to the password-entry field for the correct account. That doesn’t appear to work on our 2019 Air.

We’ve dropped Apple a line to see if something’s up, and will update this review once we know more.

At last! We’ve found a substantive and quantifiable difference from the previous generation. The 2019 MacBook Air gets Apple’s adaptive True Tone technology, which adjusts the screen’s intensity and colour output to account for ambient lighting conditions and should mean your subjective experience is consistent regardless of daylight, electric lighting and so on.

We’re big fans of True Tone in general, having grown particularly fond of it on the iPad and iPhone range – although it may be worth pointing out that the more portable a device is, the more likely it is to be used in a wide variety of lighting conditions. The Air is more portable than most computers, of course, but will still be toted about less than a phone.

And funnily enough we didn’t totally love the True Tone experience on this machine. Sitting in front of the 2019 Air and a 2017 12in MacBook in the gathering dusk, it occurred to us that the orangey tint of the machine with True Tone might be more restful than the stark white one without, but it’s also a bit, well, sleepy. That stark whiteness feels a lot clearer to use… although it’s probably saturating our brains with sleep-ruining blue light, and that will serve us right.

On that front, you also have the option to use Night Shift – here are the differences between True Tone and Night Shift – but that’s available on older machines too. 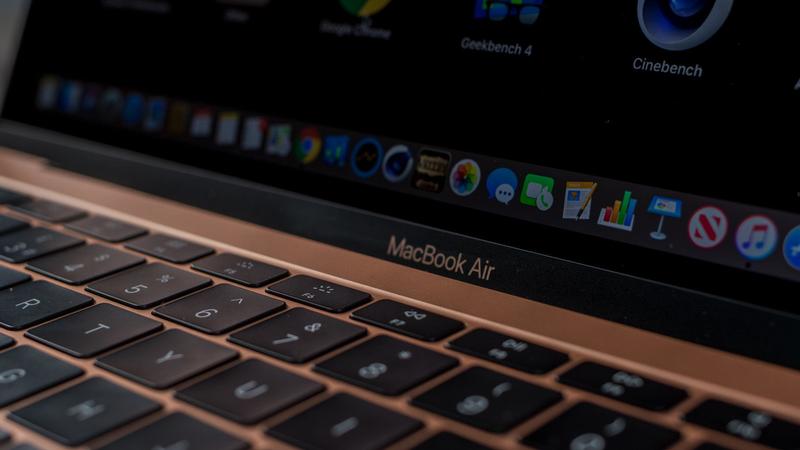 At any rate you won’t normally have a second laptop right there to make the difference so obvious (in general it’s a subtle effect), and it’s easy to turn True Tone off if you’re not keen. Indeed, one of the charms of True Tone is the thoughtful way macOS shows you what the screen looks like with and without the effect during setup, so you can make an informed decision.

And aside from the novelty of True Tone, this a good-quality if ‘more of the same’ display. With a resolution of 2560 x 1600 at 227ppi, it’s sharp, as well as bright and vibrant. But no, it’s not a touchscreen display, and we’re starting to wonder if Apple will offer this feature on a MacBook.

The Air comes with a 1.6GHz dual-core Intel Core i5 processor and 8GB of RAM: a solid rather than spectacular offering, and on paper no different from the previous generation.

In fact, lab tests showed that the 2019 Air is actually a little slower than the 2018 model, which we believe is related to the use of slower flash storage – a theory that’s borne out by the new model also recording significantly slower disk read speeds.

In the Cinebench R20 rendering benchmark (a test that warmed the machine and set the fans going) the Air averaged a score of 666, which is on the low side; the MacBook Pro 2019 scored 3,222. And the Air recorded an underwhelming score of 241, with an average frame rate of 5.8fps, in the Unigine Valley stress test. 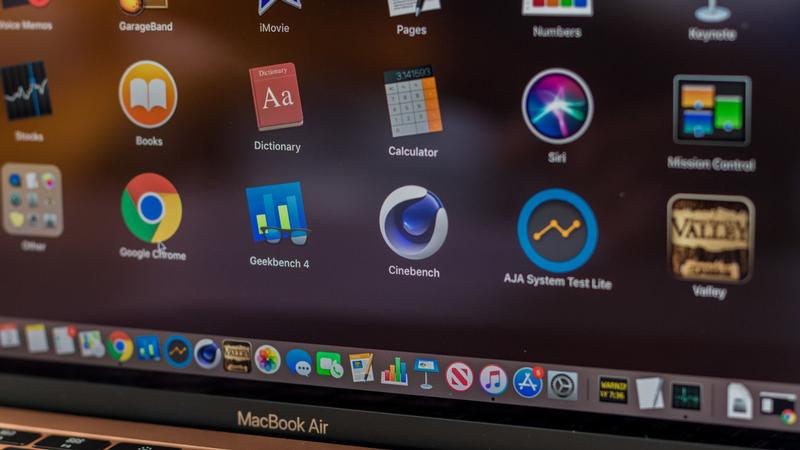 This is not a superfast machine, then. For most prospective Air buyers, however, speed benchmarks will not be a major issue.

It’s not a machine that’s being marketed towards creative professionals, gamers or other Mac users who need major processing welly. For checking email, browsing the web, a little light work and the odd graphically undemanding game, it will do just fine.

There are stereo speakers either side of the keyboard, two USB-C/Thunderbolt 3 ports on the lefthand side (one of which will have to serve as a power point if you want to use it while charging), and a headphone port on the right. That second USB-C port is crucial, in our view: having just one was a major headache on the 12in MacBook. 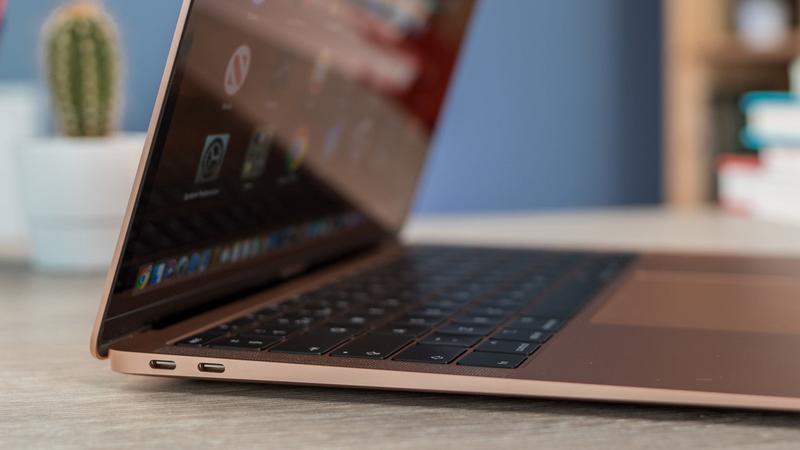 The speakers are decent by laptop standards, with respectable volume when cranked up to the maximum. The stereo effect only really works when you’re not just using the laptop but leaning forward, however, and don’t expect much of a bass punch.

The MacBook Air is known for its battery life, and the 2019 version keeps up that proud tradition. In our looped-video test, with the screen set to 120cd/m2 brightness and True Tone turned off, it lasted 13 hours and 7 minutes.

That’s a serious effort, and almost exactly tallies with the “up to 13 hours iTunes film playback” that the maker estimates.

The laptop comes with a 30W USB-C mains charger. With this, the Air went from 0 to 25% power in 30 minutes, so it’s capable of charging up nice and quick. Faster charging speeds still should be possible if you spend extra for a 61W charger or even the super-powered 87W model. 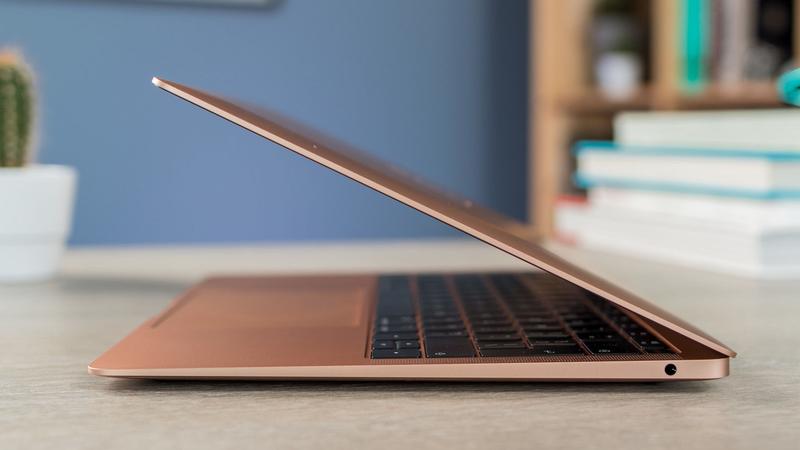 Note that now this 2019 model has been replaced by the MacBook Air 2020, it’s no longer on sale from Apple.

This means you’ll find it hard to find even at other retailers. There’s not much stock around but you can still buy one from the likes of Currys PC World if you want.

However, with the price still at £1,099 at the time of writing, you’ll likely want to get the 2020 model instead which actually starts at a lower price of just £999.

That’s partly down to it’s Core i3 processor but the base configuration will still be enough power for the kind of day-to-day tasks the MacBook Air is designed for. In fact, in our benchmarks, the 2020 scored over 2000 points more in Geekbench 4.

If your heart’s not set on a Mac then check out our best laptop chart where there’s strong competition from the likes of Dell, HP and Huawei.

It wasn’t that different from the 2018 edition and the keyboard is still not perfect. Apple’s True Tone display technology did arrive but this isn’t a huge deal.

If retailers were offering this laptop at a reduced price then it could be a bargain, but the latest model is available from Apple for a lower price so it’s really a no brainer.

As well as being cheaper, the MacBook Air 2020 benchmarks faster and has the new Magic Keyboard.

If Apple follows its own rules, you’ll soon be able to stream your Xbox to your iPhone

How To Watch The Great British Bake Off In The US

Kuo: Mini-LED Displays to Debut in Apple’s Next iPad Pro