Apple continues to lead the global premium smartphone segment, although shipments declined 20% year-on-year in Q1 2019, according to new data from Counterpoint Research.

The research analyst’s Market Monitor Service for Q1 2019 showed that Apple’s declining shipments pulled down the global smartphone premium segment by as much as 8% year-on-year.

The group classifies premium smartphones as those which cost above $400 (R5,500).

“According to our analysis, the trend of users holding onto their iPhones for longer has affected Apple’s shipments. The replacement cycle for iPhones has grown to over three years, on an average, from two years.

“On the other hand, substantial design changes in the Galaxy S10 series and the better value proposition it offers compared to high-end iPhones helped Samsung close the gap to Apple in the global premium segment,” the analyst said.

Apart from Apple’s falling shipments, the sluggishness of the Chinese market was the other key reason for the decline in the global premium segment,” Counterpoint Research. 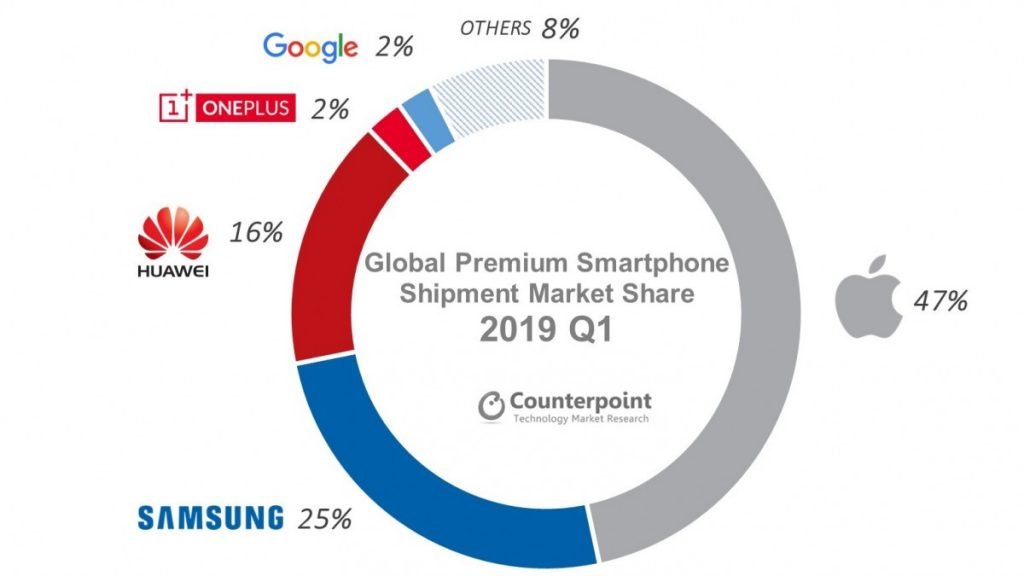 “Our estimates suggest that almost half of the decline in the global premium segment in Q1 2019 was due to the sluggish Chinese market. However, we expect that as 5G begins to commercialise in the future, the premium segment will grow. In 2019 and 2020, all the 5G devices are expected to launch in the premium segment,” Mishra said.

“Impeccable camera quality, AI technology, and superior build quality of its flagship mate and P series drove the growth for Huawei during the quarter. Huawei even surpassed Apple to become the top player in the premium smartphone market in China – a market where Apple has been struggling,” Mishra said.

Counterpoint Research stressed, however, that the trade ban imposed by the US will restrict its continued global growth. The premium segment contributes to 18% of Huawei’s smartphone shipments.

“However, these are the most profitable price bands, and declining sales here will cripple Huawei’s marketing capability and R&D investment budgets for the future. Samsung and Apple are expected to gain from the gap created by Huawei in the future.”

Read: Why Huawei is beating Apple as the second biggest smartphone brand in the world

Vine relaunches as Byte, bringing six-second videos back to the web

Every Unova region Pokémon in Pokémon Go so far

Apple gets its WiLan patent payout reduced to $85.2 million

How to control your lights with Amazon Echo

5 overlooked Apple Maps tricks you definitely should be using

Apple must pay $85M to WiLan after patent retrial