Apple’s current line-up and many flagship Android phones support a wireless charging standard known as Qi (pronounced ‘chee’), and you can use any of the wireless chargers we’ve listed here with your phone.

There are quite a few wireless chargers out there, and all at differing price points, so it can be tricky to know which to buy. Some have faster-charging capabilities, but not all phones do, so it’s worth checking what your phone supports. For example, iPhones support up to 7.5W, while some Samsung phones support up to 15W.

Most wireless chargers claim to be “fast” but it’s worth checking on the actual wattage. Look out for 7.5W or more for the fastest charging. That said, some older or cheaper phones won’t charge any faster at 7.5W than 5W.

But beyond that, they’re all largely similar, so the deciding factor could come down to price and design. Some might be able to charge multiple devices at once, and some will have additional features such as a stand or car mount, or even a place to keep your pens! 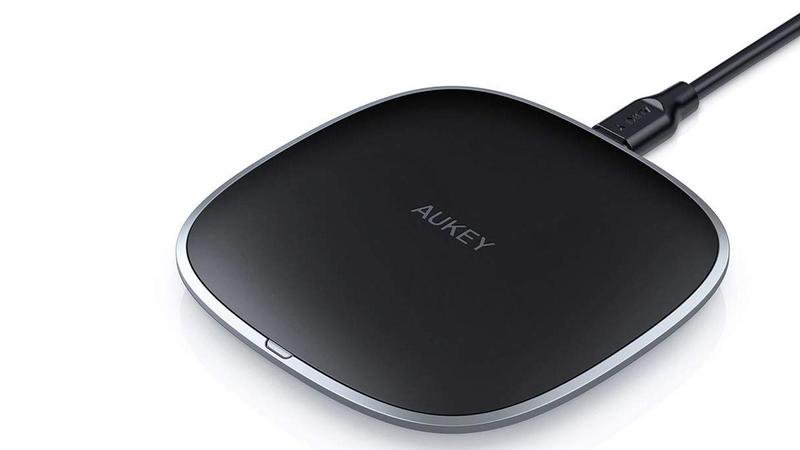 Fast and relatively cheap at just £23.99 from Amazon, this Aukey Wireless Charger is a 10W model that has scored a red dot award for its design.

Ultra-compact and almost pebble-shaped, with a smooth matt black finish and silver metal outer ring, the Aukey looks infinitely better than some wireless chargers we’ve seen. A small LED on top lets you know whether it’s working as it should. If it’s green you’re all good.

Four little rubber feet on the bottom keep it steady on the desk, while a 1m USB-C cable plugs in unobtrusively at the rear.

All Aukey products come with a 24-month warranty, too, which offers peace of mind. 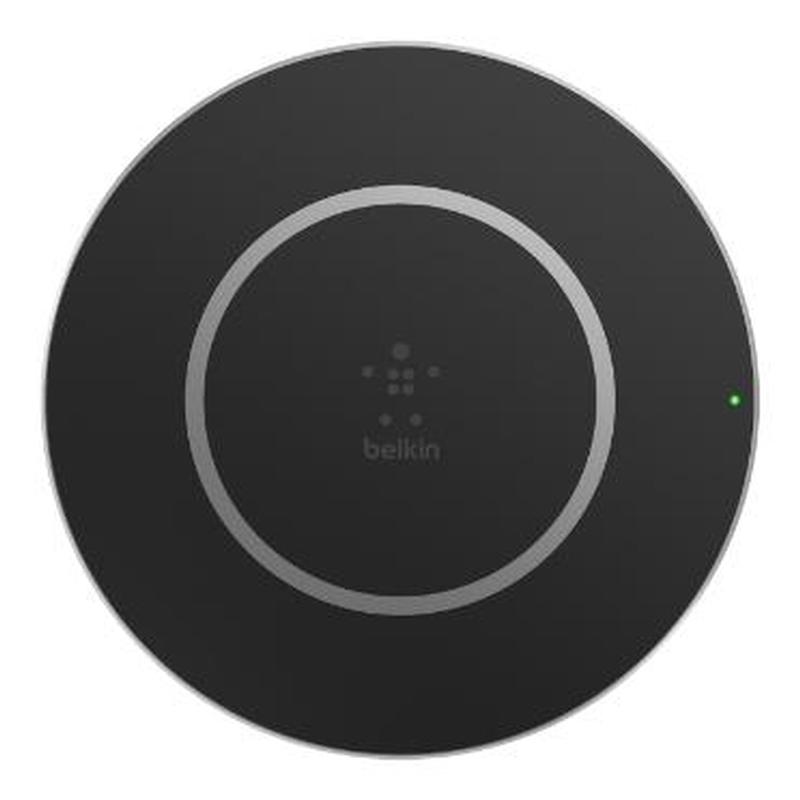 If you want a fast wireless charger then Belkin is on hand with its range of Boost Up pads.

While some are 7.5- or even 5W, the Boost Up charger is 15W giving you a much quicker wireless charging time. Just make sure your device also supports fast charging over wireless to get the full benefit.

This model is for Samsung phones but it uses Qi technology so you can charge other devices like iPhone on it, too – just at a lower power than 15W.

The pad itself features an LED, soft surface to avoid scratches and will even work with a case on your phone (up to 3mm). It’s also wide and stable, plus the embossed ring indicated the charging area. 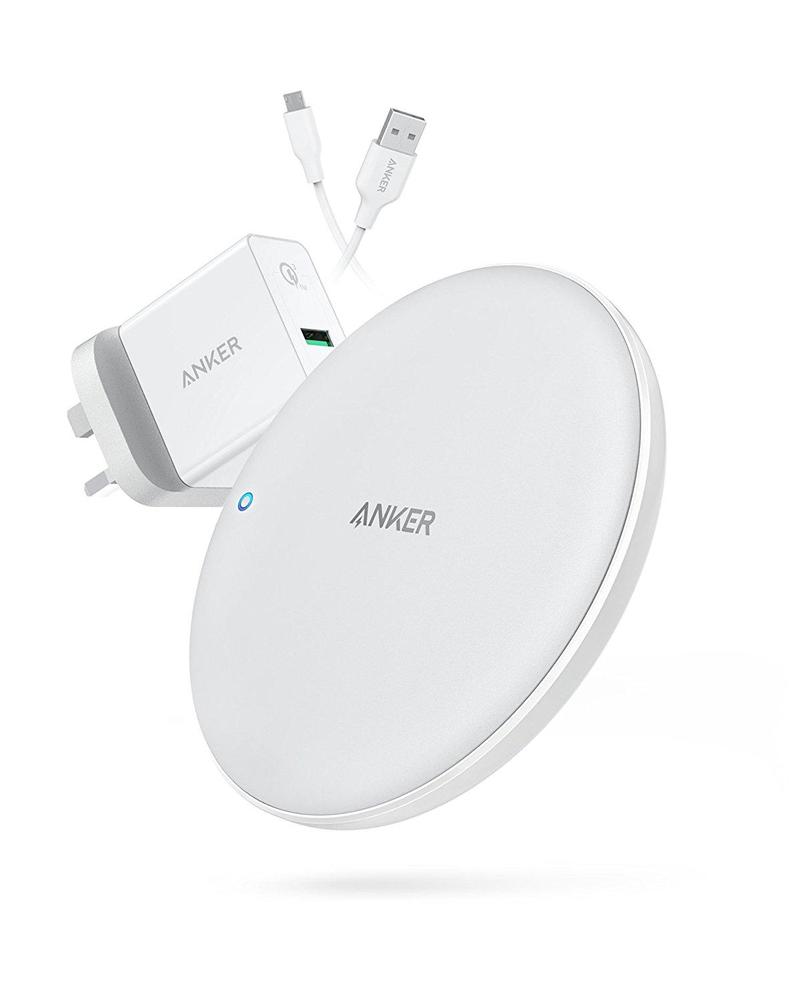 Anker is one of the best known names in affordable charging tech, but this Qi wireless charger is a tad more expensive than some of the other examples in our list. Why is that?

One of the things that really appeals to us about this wireless charger is it caters to everyone, and can really ramp up the speed when you’re in a rush.

It supports 7.5W wireless charging for the latest iPhones, but can also accommodate the faster 10W charging of some Android phones such as those from Samsung. If that’s still not enough, the bundled charger (itself not always a given) is a Quick Charge 3.0 model that will in a short space of time boost your mobile power significantly.

You might think wireless charging pads are all more or less the same, bar the amount of power they can direct to your phone. This Anker is better designed than most, however, with a fan in its base that ensures it will never overheat no matter how long you leave your phone to charge.

It also has a matte surface that will stop your phone accidentally getting knocked off its surface, and a small LED activity light that won’t be obtrusive at night. It can charge through cases up to 5mm. 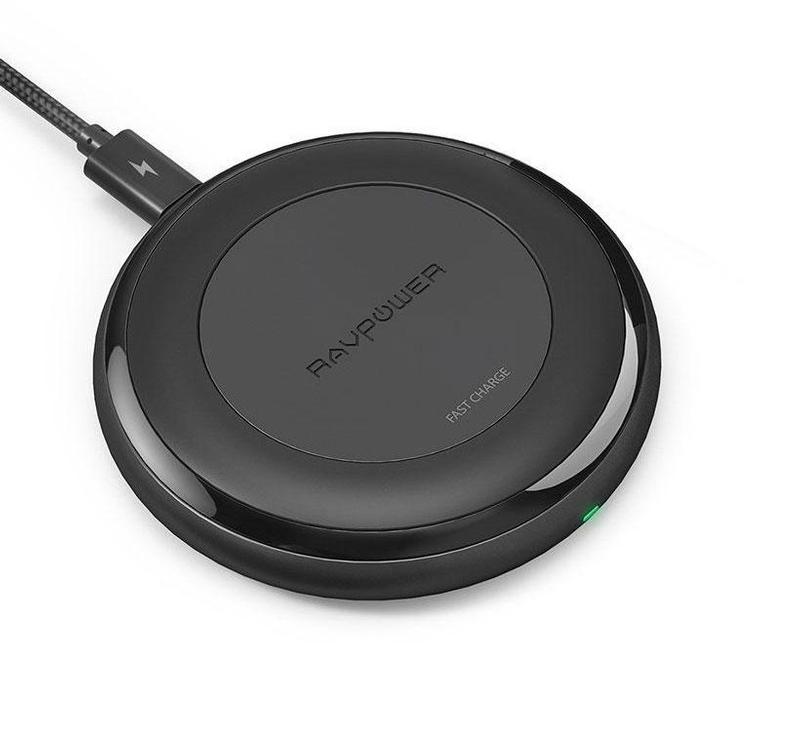 RavPower’s Fast Wireless charging pad is much like Anker’s above. It’s a little cheaper, but offers the same 10W power for phones that support it.

For the iPhone X (and iPhone 8 with the latest iOS update) it will output 7.5W, which means a charge time from empty of about three hours.

It will work only with the included mains adaptor, but that adaptor also happens to support QC 3.0 (again like the Anker) so can supply up to 24W to compatible phones such as the Google Pixel and Sony Xperia XZ2.

There’s no fan in it, so it won’t annoy you, and we had no problems with it overheating during our testing. A rubber ring helps keep your phone in place, too.

A flashing green light on the base indicates charging is taking place, but it’s not too bright or distracting. The pad is supplied with a 1.2m microUSB braided cable. 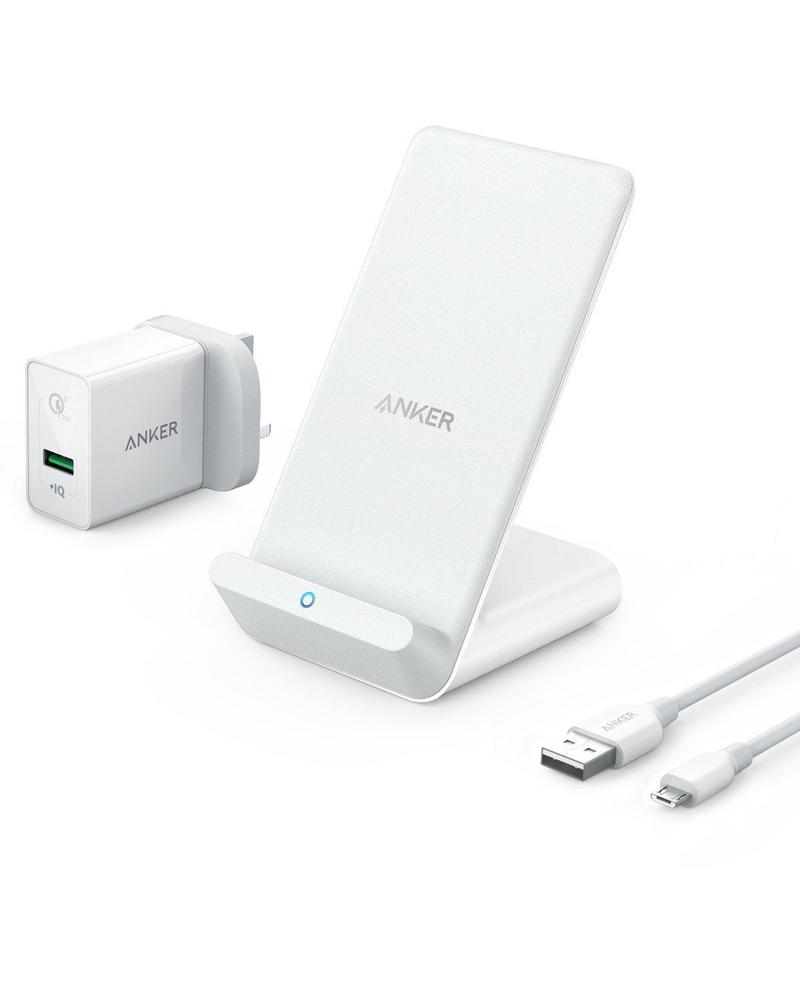 The Anker PowerWave 7.5W Stand is in specification identical to the PowerWave Pad you’ll have just read about. It has a slightly different upright docking design that makes it more convenient for using your phone while it charges, which accounts for the few pounds extra in cost. Its slimline design is almost exactly the same width as the Galaxy S8 we’re testing it with.

It has the same light grey grippy surface, unobtrusive activity LED, and fan built into its base to prevent overheating. And it also ships with a Quick Charge 3.0 USB adaptor for when even the 10W output isn’t fast enough.

You should note that both models will work with a standard USB charger, though the LED will flash blue. In order to get the maximum 10W from the stand you must ensure the USB adaptor you use is also capable of delivering 10W. 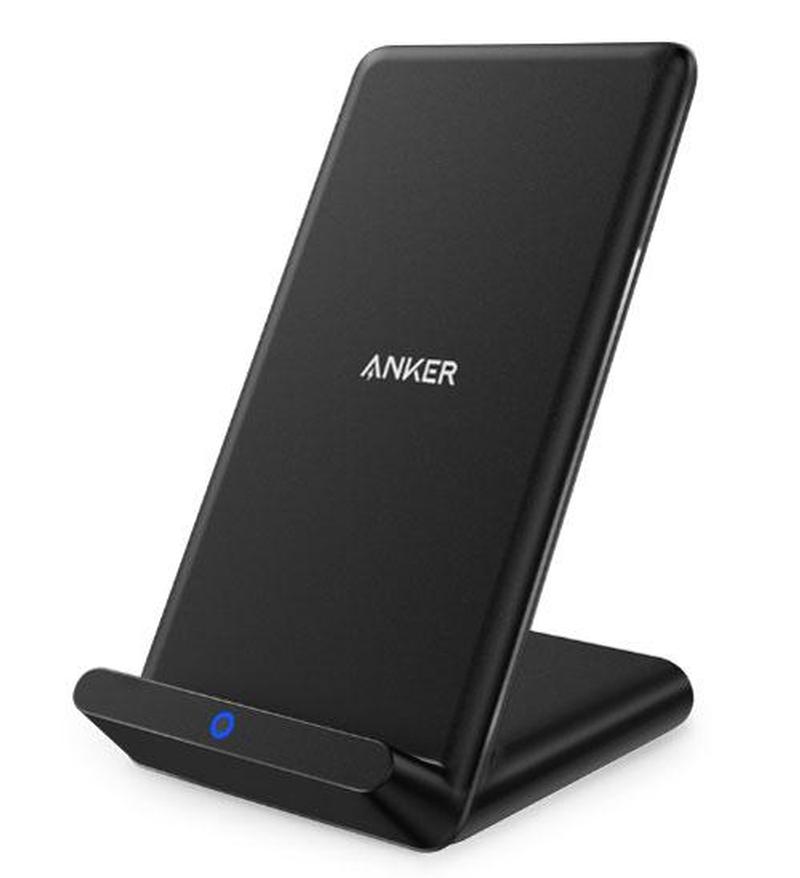 Also from Anker, we tested the Qi-certified PowerPort Wireless 5 Stand Wireless Charger, While this is less powerful, at 5W, we found it more responsive with phones in thicker cases.

Although it has a 5W output, Anker claims that it can charge faster than most 5W wireless chargers and can cut 40 minutes off the charging time for an iPhone X (3.5 hours rather than 3.9 hours).

It also works as a stand, which is handy for phones with facial recognition, and lets you see alerts and messages as they flash up on the phone’s screen.

It features the same overvoltage protection and temperature control as the 7.5W model above – although it doesn’t ship with a power plug, just a MicroUSB cable to plug into a laptop, hub or USB power port.

And it’s a little cheaper, too… which is nice. 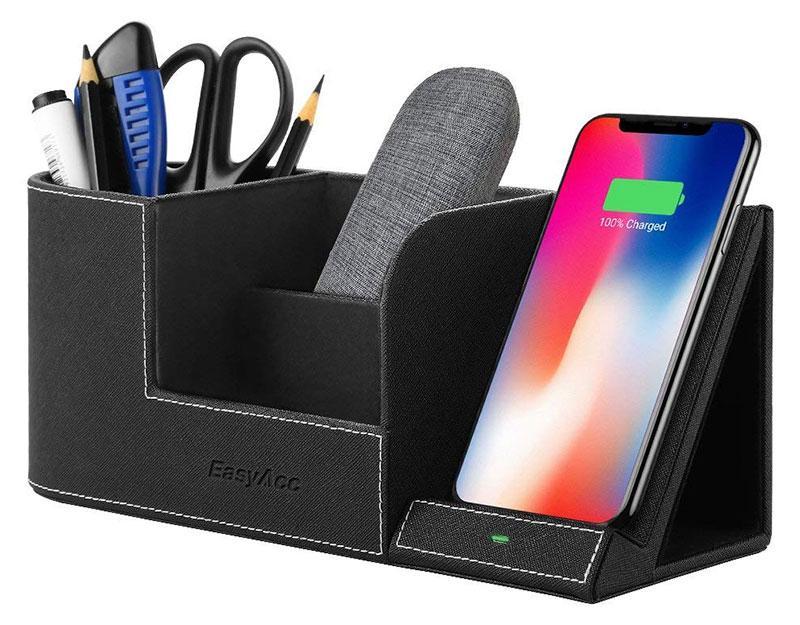 On first glance, I thought this was a bit of a novelty item, but it’s actually quite brilliant.

Rather than have a wireless charger and somewhere to keep your pens, Post-It notes, paper clips and stapler, just combine them into this handy desk organiser that includes a Qi-compatible wireless charging stand.

It also hides the power cable better than most wireless chargers. I love it! 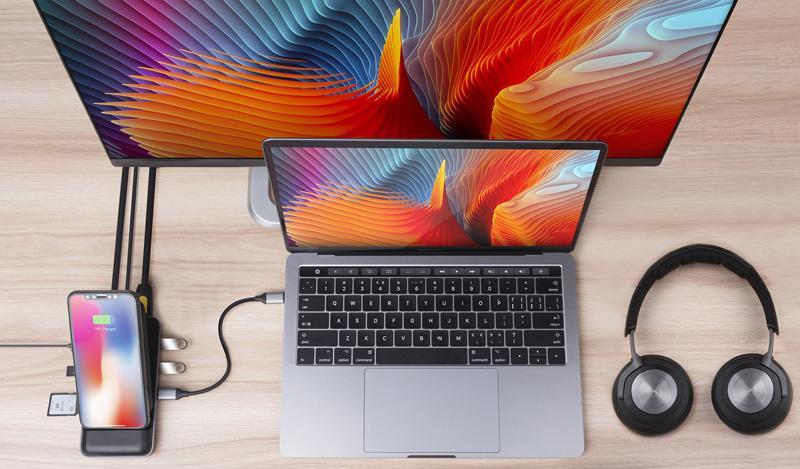 As its name most definitely makes clear, the HyperDrive 7.5W Wireless Charger USB-C Hub is both a wireless charger and USB-C hub.

As a wireless charger it offers a handy viewing stand, rather than just lying flat on your table, and decent 7.5W charging. It also supports 5/10/15W high-speed Android wireless charging.

But would be expensive as just a charger, and this multi-function device is also an impressive 8-in-1 USB-C charger that turns a single USB-C into eight ports: 4K HDMI, Gigabit Ethernet, 3 x USB-3.0, SD Micro SD, and USB-C 100W pass-through Power Delivery.

And it does all that in a highly portable compact and lightweight casing. 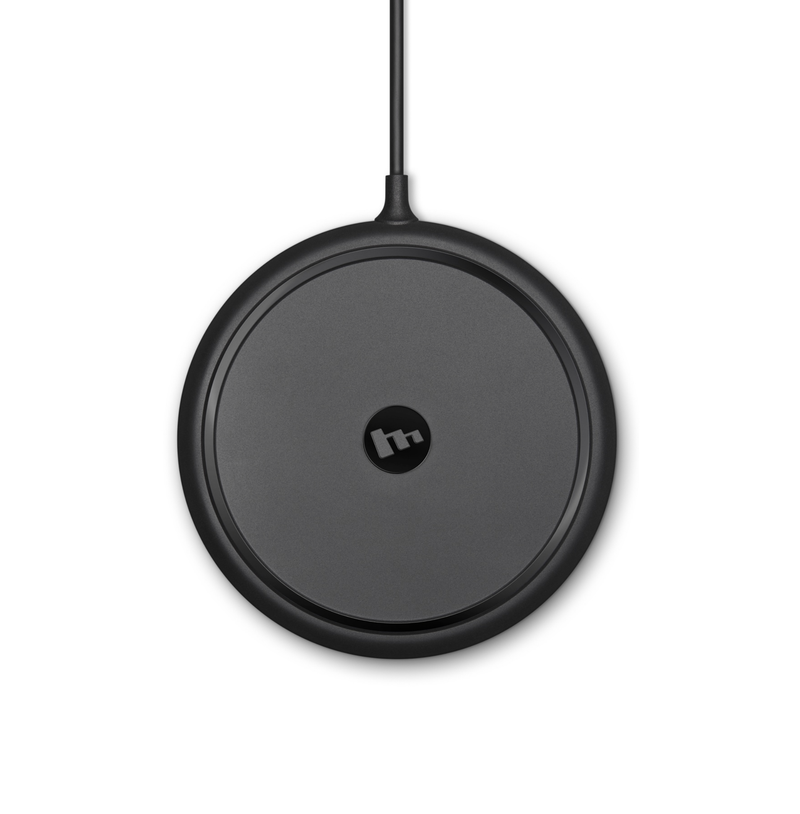 The second charger to be mentioned by Apple during the iPhone event was Mophie’s Wireless Charging Base, which comes in the form of a simple black disk, also with an LED light and AC adapter.

It’s the same price as Belkin’s offering, so not the cheapest available but from an Apple-endorsed vendor, and also offers quick-charging speeds with up to 7.5W of power. 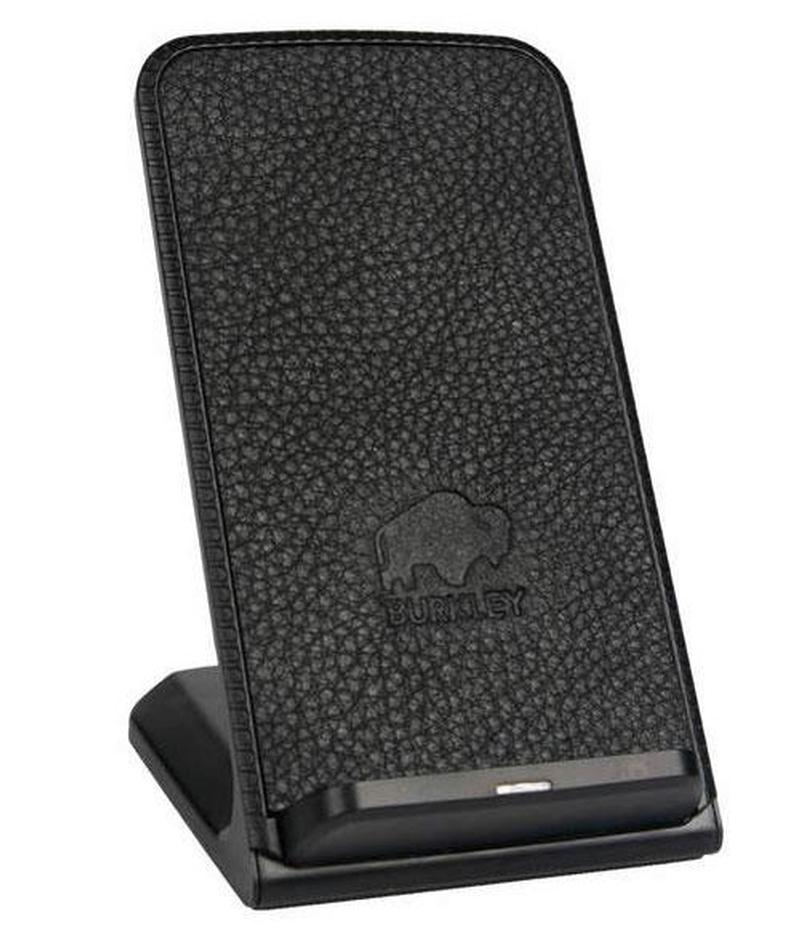 The Burkley Fast Wireless Charger Stand is also helpfully tlited to allow you to see your phone while it wirelessly charges.

It’s compatible with all QI devices, and offers up to 10W for phones that support faster charge speeds, such as iPhone 8, iPhone X and Samsung Galaxy S9.

It’s in nice, genuine black leather to make your office look like old-fashioned office luxury. The wireless charger stand light turns into blue for two seconds when it connects to power, and then green when it starts to charge the phone. 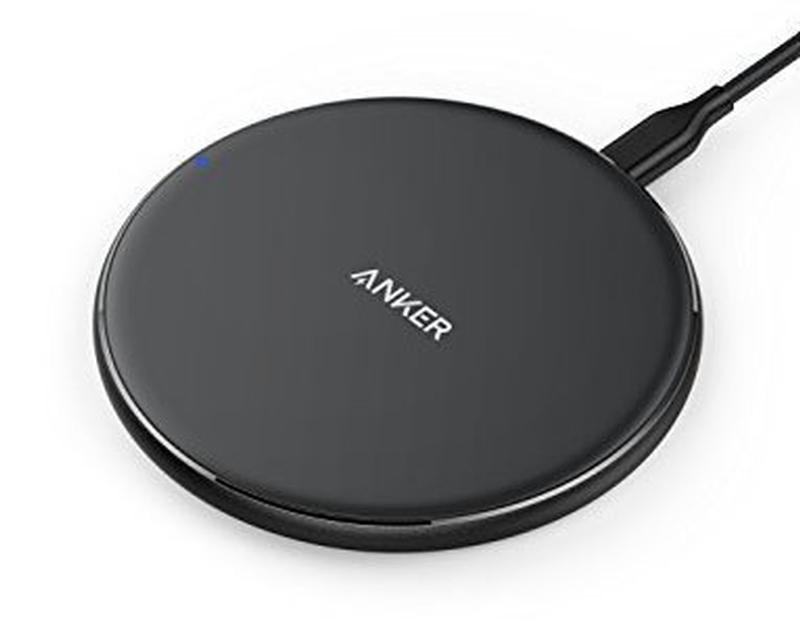 Coming in a pound cheaper at £17.99 is a second option from Anker that functions as a standard wireless charging pad rather than a stand. The beauty of this design is you can throw your phone down at any angle and charging begins.

Something we particularly like about the Anker is its design. It has a nice rubberised surface that prevents your phone slipping off, and the LED that lets you know charging is in operation is small enough that it won’t distract you at night.

It’s a bit faster than the dock, and as with that device promises to shave precious minutes (30, to be exact) off the charging time when compared to other wireless pads with the same 5W output. Anker claims you can charge an iPhone X in 3.2 hours, whereas other chargers will require 3.5 hours. It will also charge through cases up to 5mm in thickness. 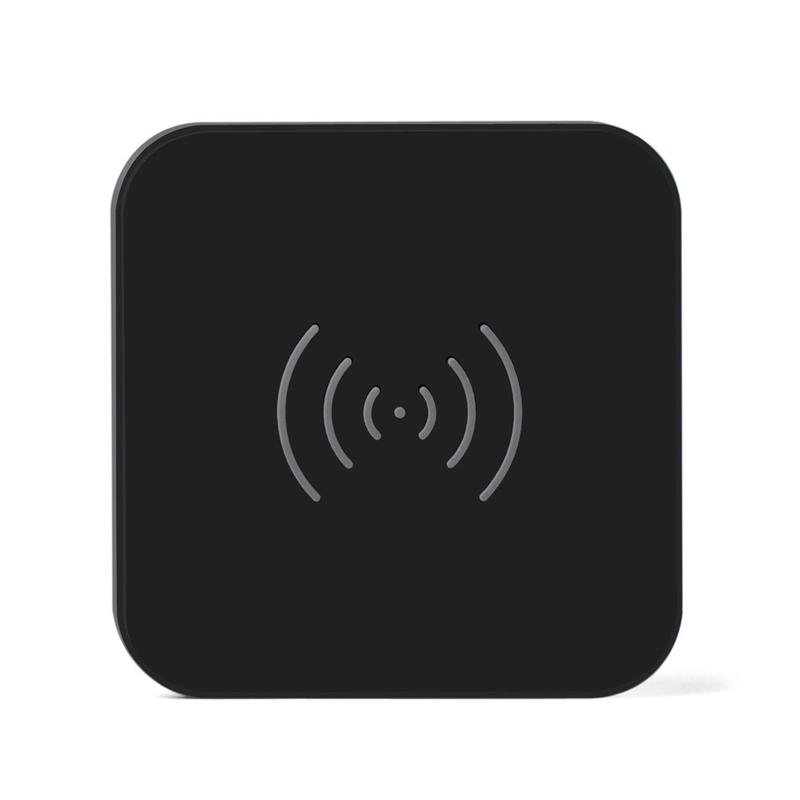 The cheapest charger in this round-up comes from Choetech, which offers a really simple 5W Qi charger pad for around £10 on Amazon.

It has non-slip grips on the top and bottom to make sure your phone and the pad itself stays in place on your bedside table or on your desk, and there’s a small LED on the front to indicate that the phone is charging successfully. 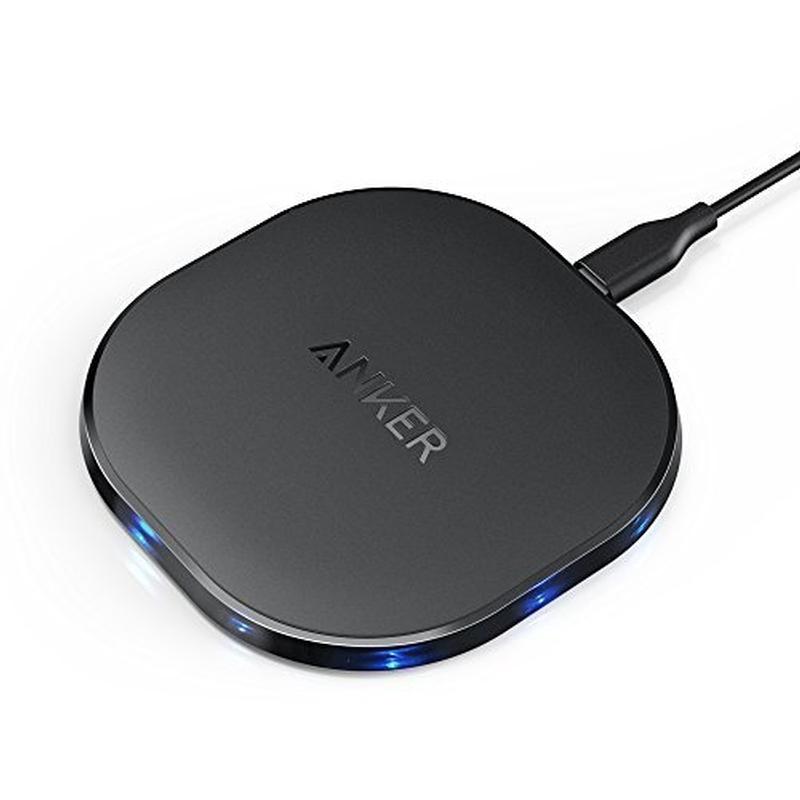 Also a really affordable option, the 5W Anker Wireless Charging Pad has a nice design with LEDs all the way round to allow you to check whether your phone is charging at a glance.

It’s clear to see why this is a bestseller on Amazon, with a good price tag, practical design and fast charging capabilities too. 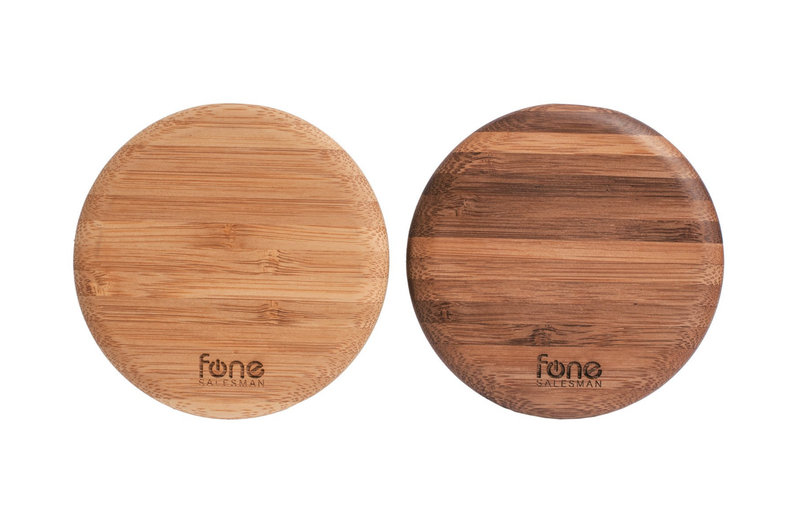 It’s a really simple design, made with bamboo rather than a plastic to help it blend in more with your home. It’s available in Cappuccino or Espresso colours, and has an affordable price tag, too. 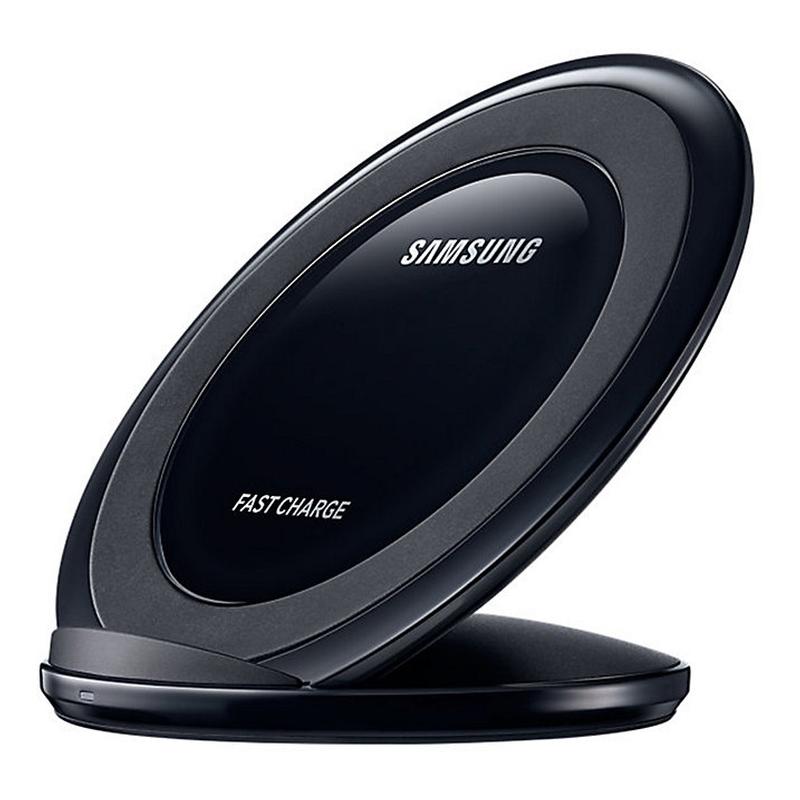 The Samsung Wireless Charging Stand will work with more than just Samsung devices, so don’t let that put you off if you’re planning to use it to charge an iPhone.

Instead of being a charging pad like many of the other products in this round-up, you’ll get a stand that allows you to prop up the phone in a viewing position while it charges, perhaps on your desk so that you don’t need to pick it up to see notifications.

It’s fast-charge compatible, too – although we couldn’t find definite conformation that it charges at 7.5W rather than 5W. 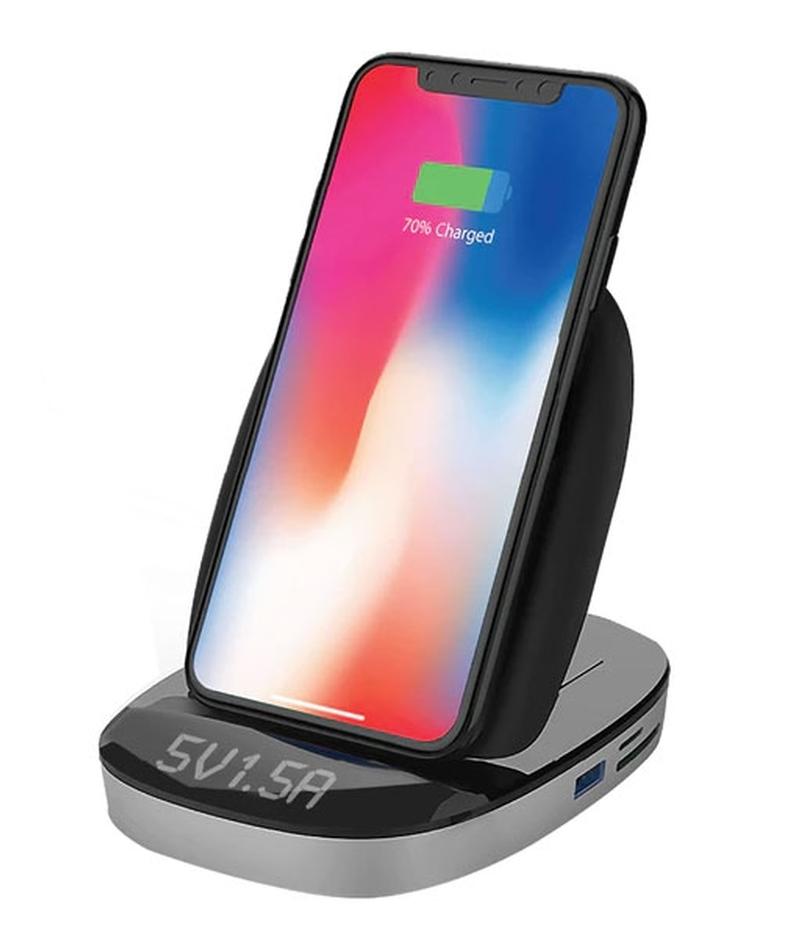 The HyperDrive by Sanho is a fully crowdfunded 8-in-1 USB-C Hub with wireless charging.

You can lay your phone flat on the charger or in landscape or portrait mode with the convertible phone stand. The HyperDrive can connect either to a USB-C laptop or mains power, and boasts eight ports: 4K HDMI, Gigabit Ethernet, microSD, SD, three USB 3.1, and USB-C Power.

Its Kickstarter price is $159 (plus $20 shipping outside the US), but there are pledges starting at $109 for one HyperDrive.

Editorial: How smartphones have shifted perceptions on police brutality

How to Protect Yourself from the Microsoft Tech Support Phone Scam