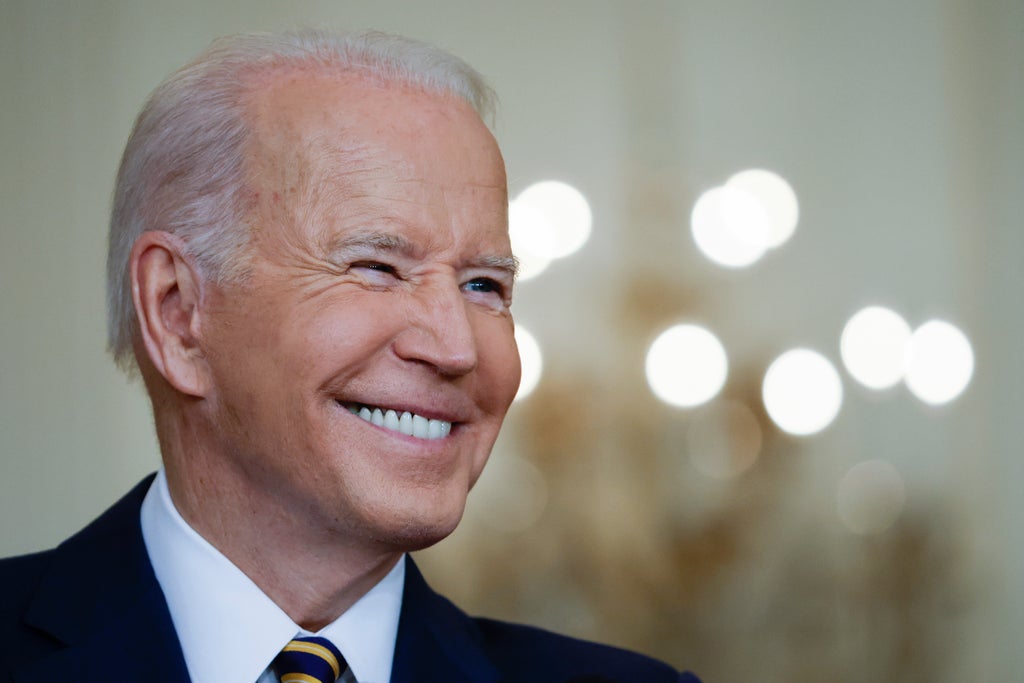 President Joe Biden said he is confident that large parts of his proposed Build Back Better law can pass through the Senate despite opposition from Sen Joe Manchin.

“I’m confident we will get pieces, big chunks, of the Build Back Better law signed into law,” he told reporters in a news conference on Wednesday. “And I’m confident that we can take the case to the American people that the people they should be voting for who are going to oversee elections are in fact legit or not should not be those who are being put up by the Republicans to determine that they’re going to be able to change the outcome of the elections.”

Mr Biden’s words come as he tries to reset negotiations in his proposed social spending bill after Sen Joe Manchin announced his opposition to the legislation in December. Democrats had previously accommodated the West Virginia Democrat who hails from a state where former president Donald Trump won every county.

Mr Biden had touted the fact that child poverty had been significantly slashed. But January marks the first month since July that families did not receive the expanded child tax credit payments that includes $300 for young children and $250 for children up to 17 years old.

Democrats need every one of their 50 Senators to pass the bill through what is called budget reconciliation, which allows for the bill to sidestep the 60-vote filibuster threshold for legislation related to spending.

Mr Biden reiterated the fact Build Back better would not survive in one piece.

“It’s clear to me that we’re going to have to probably break it up,” he told reporters. “It’s clear that we would be able to get support for $500 plus billion for energy and the environment.”

The lack of cohesion among the Democratic caucus is not only an impediment to Democrats’ plans on social spending, but also their plans on voting rights. On Wednesday, the Senate began debate on voting rights legislation and planned to initiate a talking filibuster as a means of passing voting rights with only 51 votes.

But Mr Manchin and fellow conservative Democrat Sen Kyrsten Sinema of Arizona have opposed changes to the filibuster to pass voting rights.

Mr Biden also took exception to the idea that he over-promised to the American people when he came into office.

“I don’t think I’ve overpromised at all,” he said. “One thing I haven’t been able to do so far is get my Republican friends to get in the game of making things better in this country.”

Mr Biden noted how Gov Chris Sununu saying that he decided not to run for Senate in New Hampshire since Republicans seemed content to just obstruct the president until 2024.

“I did not anticipate that there’d be such a stalwart effort to make sure that the most important thing was that President Biden didn’t get anything done,” he said. “Think about this. What are Republicans for? What are they for? Name me one thing they’re for.”

Mr Biden also responded to criticism from Sen Mitt Romney that Mr Biden had not reached out to him on voting rights, noting that he was busy trying to work within his own Democratic caucus.

The president also assailed Republicans for still being afraid of Mr Trump.

“Did you ever think that one man out of office could intimidate an entire party where they’re unwilling to take any vote contrary to what he thinks should be taken for fear of being defeated in a primary,” he said.

He also stressed that his administration would continue to tackle Covid-19 and not send the economy back into a shutdown or close schools again.

“Some people may call what’s happening now a ‘new normal.’ I call it a job not yet finished,” he said. “It will get better, we’re moving toward a time when Covid-19 won’t disrupt our daily lives.”

When asked about Black voters, who were integral to him winning the Democratic nomination, Mr Biden said he continued to look out for their interests, despite the fact that the John Lewis Voting Rights Advancement Act has remained stalled.

“There is a timing that is not of one’s own choice,” he said, but rather that is “dictated by events that are happening in country and around the world as to what the focus is.”