With help from Tanya Snyder

BOEING BACK IN THE HOT SEAT: When it comes to the grounded Boeing 737 MAX, two things are happening simultaneously in the next few weeks: Regulators around the world are nearing the end of their processes to approve the plane to fly again. And lawmakers in Congress are narrowing in on legislation aiming to prevent such disasters from happening again.

European aviation regulators at EASA have completed test flights of the MAX, a step toward eventually ungrounding the fleet. The next step, as our Tanya Snyder reports, is a nine-day Joint Operations Evaluation Board meeting where the regulators and their counterparts from the U.S., Canada and Brazil will evaluate changes to pilot training for the MAX. That begins today at London’s Gatwick Airport. Then two other review boards will complete their own work before the FAA issues an airworthiness directive and formally ungrounds the plane.

In Congress, senators led by Commerce Chair Roger Wicker (R-Miss.) are going to advance legislation through committee this week that would make significant changes to the FAA’s aircraft certification process, including requiring the agency to sign off on private company employees who perform safety certification tasks. The House, led by Transportation Chair Peter DeFazio (D-Ore.), is also expected to publish its own bill on the MAX imminently, which will likely scrutinize the FAA’s safety delegation program more aggressively.

And this week, the House Transportation Committee is expected to release a report with statements from two top Boeing executives — Keith Leverkuhn and Michael Teal — who defended their management of the 737 MAX’s development, The Wall Street Journal reported. The two “didn’t concede any procedural mistakes during the plane’s six-year development process” when they sat down for closed-door interviews with the panel’s staff in May, according to WSJ. Yet, they said they approved MCAS, the automated flight control feature behind the two crashes, without fully understanding how it worked, per the story. Teal is now head engineer for the development of Boeing’s new 777X. Leverkuhn has since retired.

In a statement to MT, Boeing said: “Given the breadth of their responsibilities, Mr. Leverkuhn and Mr. Teal were not, and could not have been, involved in every design decision and necessarily relied on engineering specialists to perform the detailed design and certification work associated with individual systems. That design process among technical experts is an integral and essential part of aircraft development, and numerous independent reviews have confirmed that the process complied with the FAA’s certification requirements at that time.”

IT’S MONDAY: Thanks for tuning in to POLITICO’s Morning Transportation, your daily tipsheet on all things trains, planes, automobiles and ports. Get in touch with tips, feedback or song lyric suggestions at [email protected] or @samjmintz.

LISTEN HERE: Follow MT’s playlist on Spotify. What better way to start your day than with songs (picked by us and readers) about roads, railways, rivers and runways.

A message from Raytheon Intelligence & Space:

As new technologies and new threats emerge, Raytheon Intelligence & Space is proud to lead an alliance of innovators and industry leaders committed to helping the FAA modernize, secure and expand our national airspace. Learn how the Alliance for Innovation & Resiliency is supporting the network that supports us all.

RELIEF TALKS UPDATE: “I wish I could tell you we were going to get another package, but it doesn’t look that good right now,” Senate Majority Leader Mitch McConnell said on Friday. We’re watching this week for any movement on that front, as well as talks specifically for airline aid ahead of Oct. 1 when funds from the CARES Act expire.

KEEPING THE HEAT ON: In an unusual Sunday show appearance, United Airlines CEO Scott Kirby made another pitch for federal assistance and laid out a gloomy prediction that air travel wouldn’t return to pre-pandemic levels until a vaccine was developed and widely distributed. United has raised about $18 billion in private capital since the start of the pandemic, but with the airline “burning” about $25 million per day, “you just can’t go forever on that,” he said on CBS’ “Face the Nation.” United has said it expects to furlough about 16,000 people come Oct. 1 without more aid. “We just have to get a bigger deal done,” he said. “We’re kind of wrapped up in the bigger negotiations that are going on in Washington.”

PASSING THE COLLECTION PLATE: The Obama transportation old guard is the centerpiece of a Biden campaign fundraiser on Tuesday, hosted by a trio of former DOT officials and featuring speeches from two former Cabinet members. As our fearless leader Kathryn A. Wolfe scooped, the minimum $250-a-head virtual fundraiser centers around the Democratic nominee’s “Build Back Better” plan, the campaign’s alliterative mantra that includes major infrastructure investment.

WE’LL SPARE YOU THE JOKES: The week formerly known as Infrastructure Week is, well, this week. United For Infrastructure’s week of advocacy is taking place virtually, featuring dozens of panels and talks, including appearances from two former Transportation secretaries. Expect lots of talk about Congress’ next steps on surface transportation, which center around a likely extension of the FAST Act, expiring on Sept. 30.

BIG JUMP IN GAS TAX RECEIPTS? Highway Trust Fund revenues appeared to soar in August, up 22 percent over July and — more surprisingly — a whopping 45 percent higher than last August’s totals, according to newly released Treasury numbers. But take the news with a grain of salt: Chaos at Treasury amid the pandemic has led to unreliable numbers for various trust funds for months and no one is really sure if this month’s — or previous months’ — receipts are accurate. Still, it’s an undeniable relief to see those numbers heading back up after steep declines. Treasury did not respond to a request for comment.

AT THE SLOTS: The FAA published a notice in the Federal Register today that proposes extending exemptions from minimum airport slot usage requirements at capacity-constrained airports until next March to provide airlines additional relief as passenger demand remains low during the pandemic, Stephanie reported. However, the FAA also wants to tack on new conditions to the exemptions, including that airlines do a monthly gut check and consider temporarily giving up slots they don’t intend to use. The agency also said any further relief in this area should be “narrowly tailored to afford increased access to carriers that are willing and able to operate at these airports, even if on an ad hoc basis.”

A RULEMAKING TO WATCH: Don’t forget that the FAA is continuing to work on its regulation governing remote identification for drones. The official public comment period ended in March, but important voices in the aviation world are still weighing in. The model aviation industry, general aviation groups and the drone delivery company Wing asked the agency in a letter last week to consider changes to its proposed rule, which they argue would hobble model aviation hobbyists by requiring them to incorporate complicated technology into their models. “We share the FAA’s interest in promoting responsible flying,” they wrote. “However, the proposed rule will make it difficult for everyday Americans to comply, and it will have a significant impact on the future of this community.”

THE SAGA CONTINUES: House Homeland Security Chair Bennie Thompson (D-Miss.) on Friday issued a subpoena to compel acting Homeland Security Secretary Chad Wolf to testify after Wolf “reneged” on a pledge to participate in a hearing this Thursday on “worldwide threats to the homeland,” according to a release from Thompson. As our readers know, this issue has long been a sore spot for Thompson, who told us last year that committee Democrats have had to take the unusual step of threatening to subpoena top DHS officials in the Trump administration to testify.

The committee’s top Republican, Rep. Mike Rogers (Ala.), said he disagreed with what he called a unilateral decision to issue a subpoena when “there is longstanding practice that presidential nominees do not testify at hearings unrelated to their nomination.” President Donald Trump said he would nominate Wolf to permanently head DHS on Aug. 25.

A message from Raytheon Intelligence & Space:

From drones to hypersonics to commercial space flight, tomorrow’s airspace will be filled with new technologies and new challenges. Preparing for them means modernizing — and securing — an aging network architecture. That’s why we’ve formed the Alliance for Innovation & Resiliency, a network of innovators and industry leaders committed to helping the FAA protect tomorrow’s skies. It all starts with a unique portfolio of automation, surveillance, navigation and landing solutions. Learn more.

DOT appropriations run out in 16 days. The FAA reauthorization expires in 1,111 days. Highway and transit policy is up for renewal in 16 days. 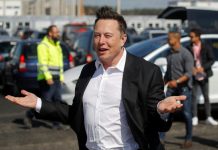 How London could achieve net zero carbon by 2050