Cars that can nab you a table at a fancy restaurant are now an honest-to-goodness thing, thanks to Yelp and GM’s Buick. The two today announced that Yelp Reservations, Yelp’s online reservation management service, has joined Buick’s infotainment app store — the Buick Marketplace — courtesy of a recent update.

It’s the first time Yelp Reservations has been embedded in vehicles, according to Sam Russell, director of Buick marketing. Prior to today’s launch, restaurant reservations functionality within Marketplace was an a la carte affair — brand partners like TGI Fridays had to code in the functionality themselves.

Bringing Yelp Reservations aboard was a logical move, Russell said. People in the U.S. spent 70 billion hours driving in 2016, and a recent Xevo survey found that 58 percent of them decide where to eat while in the car at least once a week. Phones distract from the road, but Russell said Marketplace is designed to be used while driving.

“Whether drivers want to make a dinner reservation on the go or get recommendations for restaurants in a new city, the newly added Yelp Reservations brings simple convenience to the car,” he said. “Making new features like this available for vehicles already on the road enhances our vehicles with unexpected new benefits for our customers.” 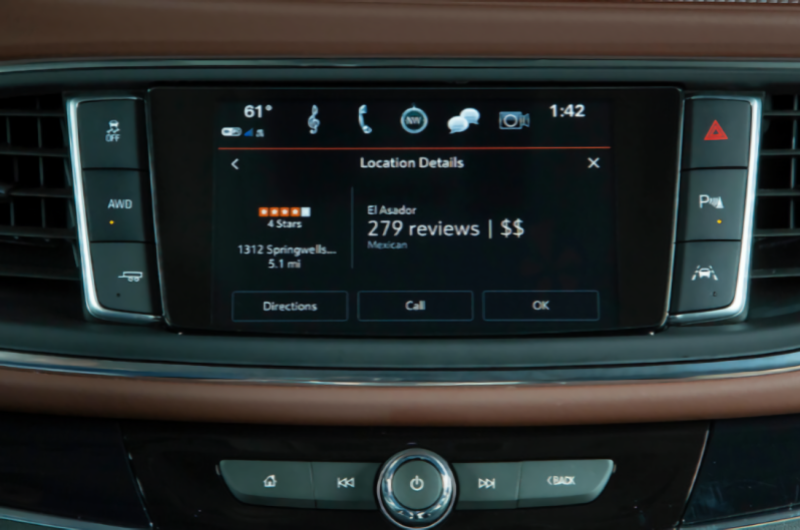 With Yelp Reservations, Buick customers can search for top dining spots (within a 25-mile radius of their location) and secure a table at participating restaurants for up to 10 people. Besides requesting a reservation, drivers and passengers can sift through the addresses, ratings, price points, and phone numbers of local joints and get turn-by-turn directions to the restaurant they select.

Currently, while Yelp Reservations is in beta, cuisine options are limited to American and Burgers, with Asian, Vegetarian, and Mexican to follow.

“Getting a table at an amazing restaurant should be easy, and we’re excited to be making that possible by bringing Yelp Reservations directly into vehicles across the country,” said Natarajan Subbiah, vice president of product at Yelp. “By embedding the Yelp Reservations booking experience into Buick vehicles, drivers have a fun, easy way to discover and secure a table at the best restaurants in their area.”

Buick Marketplace is available on all 2017 and newer models, depending on the trim level — covering about 3 million cars on the road.

Marketplace — a digital ecosystem stretching across GM brands, including Chevrolet, GMC, and Cadillac, — launched in December 2015 with software partners Xevo, Conversable, and Sionic Mobile. It delivers promotions and discounts exclusive to GM cars, trucks, and crossovers through a dedicated shop portal and surfaces personalized offers informed by machine learning from location, time of day, and other contextual clues.