It’s 2021, and the WiFi 6 cat is out of the consumer technology bag. More and more phones and laptops, from the Apple iPhone 12 Pro to the Dell XPS 13 9310, now come with speedy Wi-Fi 6 aerials packed underneath their shiny metal and plastic hoods.

However, to take advantage of the faster and more reliable speeds the Wi-Fi 6 standard offers you, you’re going to need a Wi-Fi 6 router. While these devices haven’t always been the easiest on the wallet, that starting to change.

The Asus RX-AX55 is one of the cheapest Wi-Fi 6 routers available right now. In addition to being a standalone device, this router can be set up to work as the main node in a mesh system, so you can add more devices if you don’t quite have the budget to stretch to a fully-fledged mesh Wi-Fi network system just yet.

Note that like most, this router does not include a modem so you’ll still need to plug it into your existing router.

Four adjustable antennae, which can be pushed back and moved side-to-side rise out of the back of the router. The antennae sit above four gigabit Ethernet LAN ports, and one WAN port, plus the usual reset button, WPS switch and port for the mains adapter.

There is no USB port, so you can’t attach things like external hard drives to the RT-AX55. At this price, that’s forgivable and not everyone wants or needs this function anyway – especially if you already have a NAS drive. 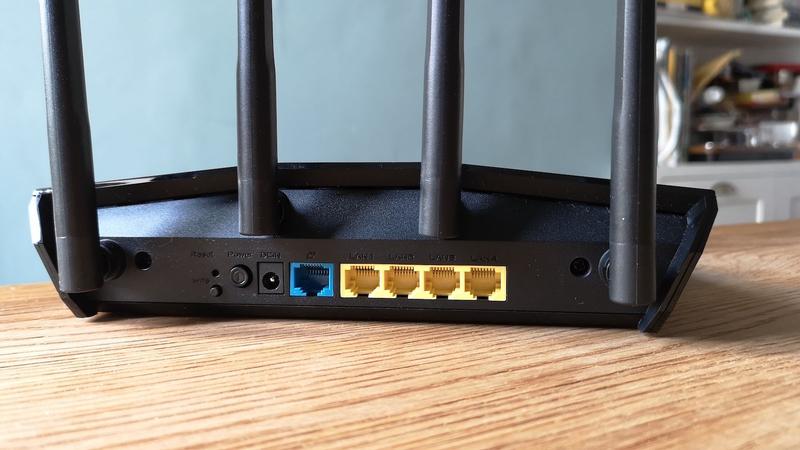 In terms of style, the RT-AX55 is a fairly typical-looking router, a flattened trapezoid with a slightly aggressive insectile look about it. Air vents on the front, rear, sides, and the bottom mean that any warm air generated by the components can easily escape.

There is no option to wall mount the RT-AX55, which may be an issue for some, but given its relatively small size and lightweight, you should easily be able to find a suitable spot for the RT-AX55 in your home.

By now, pretty much any home networking manufacturer worth their salt will have spent time making the set-up process as easy as possible for newcomers, usually by way of some very polished mobile apps, but Asus has gone one step further with its Asus Router app (available on iOS and Android).

The app interface is, dare I say it, rather cool-looking – perhaps not surprising considering Asus makes some of the best gaming laptops you can buy.

While most router apps feature clean and minimalistic lines, Asus’s app is lavishly decorated with a lot of sci-fi inspired artwork that wouldn’t look out of place on a panel in the USS Enterprise’s engine room. 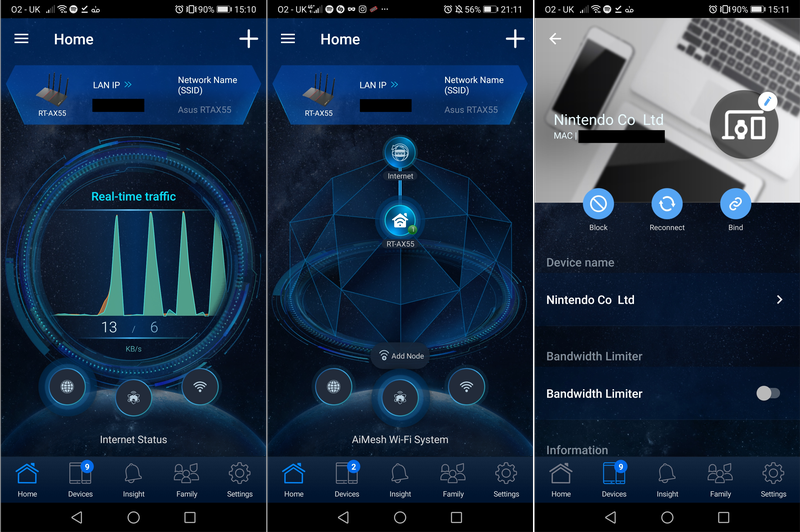 As the Asus RT-AX55 has no modem of its own, you’ll need to connect it to one. In the UK, this will mean making sure Openreach has supplied you with one, or enabling Modem Mode on your ISP supplied device, such as the Virgin Media Super Hub.

Either way, newcomers won’t feel out of place, as the Asus Router app will make you do all of the things you’re supposed to do, from powering down the modem before connecting it to the router via Ethernet, turning on the router and then powering the modem back on.

The entire process itself took about two minutes – but then I had to wait for a massive firmware update to install, which took considerably longer. While I made several cups of tea in the process, it’s good to know that Asus isn’t waiting around to make sure its customers have installed the latest patches.

Once you are all set up and good to go, you can tinker with various things via the app. Getting to grips with this is really quite simple thanks to the logical layout. At the most basic, the Asus Router app gives you a quick overview of your network and all of the devices on it.

Tapping on icons for each connected device lets you refresh connections, useful if something’s playing up, or throttle connections – handy if someone is hogging a lot of the bandwidth. If you want to block any devices entirely, you can do that here, too.

Parents wanting to assign homework hours to specific devices can do so via the Family tab. Age-related content filters can be applied to devices, too, but there’s no way to fine-tune these with block or approve lists – even diving into the desktop control panel doesn’t give you the ability to block specific URLs, which is something that a lot of other routers allow you to do. 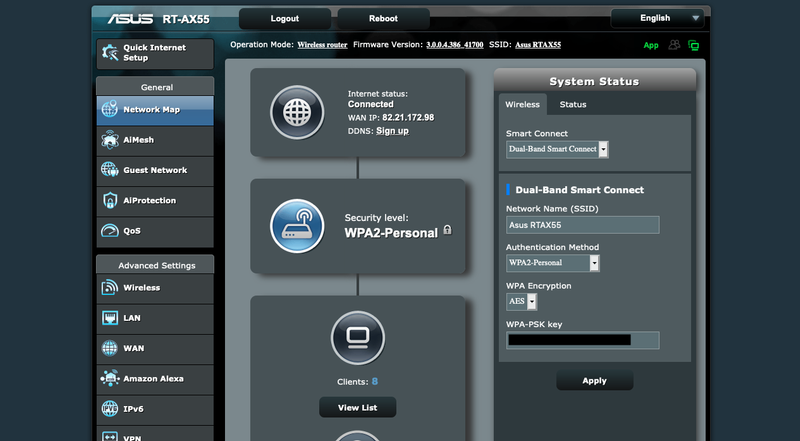 As is often the case with modern routers, if you want to tinker further, and enable things like port forwarding and configure VPN support, you’ll need to open the control panel on a desktop machine. There’s a QoS (Quality of Service) mode, which will see things like streaming traffic prioritised at certain times, but it’s not really configurable – your options are simply ‘on’ or ‘off’.

There’s also AiProtection, a security feature that uses Trend Micro software to scan for viruses in real-time and isolate and block compromised devices on your network. A very welcome feature, but no substitute for a dedicated antivirus software package.

The AiMesh menu, which lets you add more Asus networking gear to your network, can be accessed here too. Without having another AiMesh-certified device to hand, I can’t comment on how easy this is to use, nor how the Asus RT-AX55 functions as part of a mesh Wi-Fi system but the availability is there. 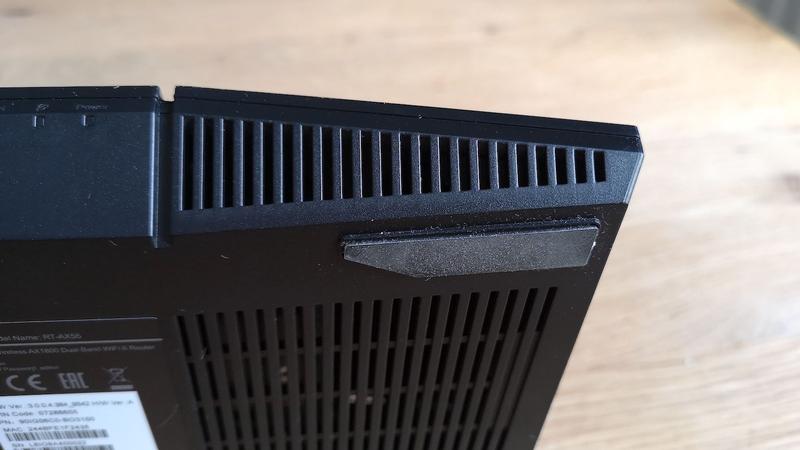 To demonstrate how the Asus RT-AX55 got on with different generations of devices and, more broadly, the difference between Wi-Fi 5 (11.ac) and Wi-Fi 6 (11.ax), I ran a series of speed tests on a Huawei Mate 10 Pro (an older phone with Wi-Fi 5 radios) and a Realme X50 Pro (a newer phone Wi-Fi 6 phone) with the WiFi Speed Pro Android app.

Averages of the results of the tests, recorded at distances across a two-storey terraced house, are displayed below.

I set the RT-AX55 up close to my Virgin Media Super Hub 3, which I’d set to Modem Mode. As with most modems, this device sits close to the master socket, which is at the front of the house.

In testing and everyday use, I found the Asus RT-AX55 to be very good in terms of speed – especially on Wi-Fi 6 devices – and in terms of coverage. In particular, connections on the 5GHz band, which usually give up after I walk two or more rooms away on any device, remained strong on the Wi-Fi 6 device, though inevitably, walking out into the garden would see me hop over to the slower, but more widely-reaching 2.4GHz frequncy.

While I wasn’t able to get much joy upstairs on the Huawei, it was pleasing to see that I could make use of a decent 5GHz connection on the Realme phone.

That said, I feel like I could only just about work upstairs on such a connection, and as with the Linksys MR7350 and TP-Link AX50 Archer, I’d really want to get a Powerline adapter or better yet an AiMesh satellite so that I could make the Asus RT-AX55 part of a mesh Wi-Fi network. 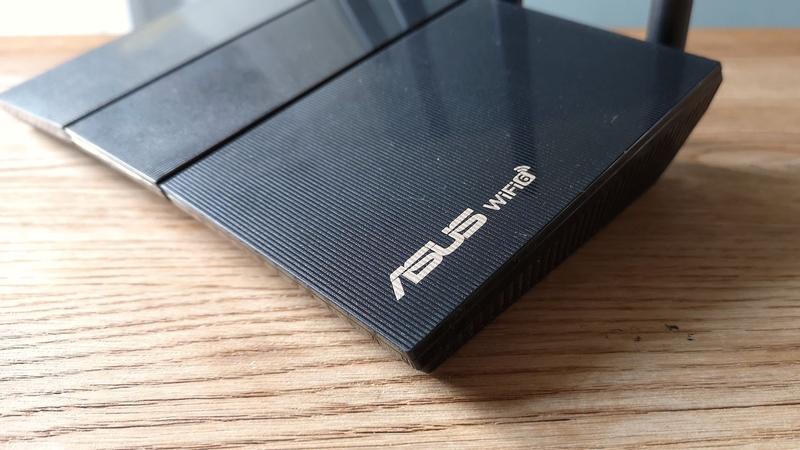 On the subject of the TP-Link AX50 Archer, I feel like it’s worth mentioning that that device supports 160MHz-wide channels, and so is theoretically capable of delivering much faster speeds than the Asus RT-AX55, which just supports 80MHz channels.

For the great majority of customers, this will likely not be an issue, as the results above demonstrate the kind of speeds you can expect on most devices.

I would love to be able to talk about pairing one RT-AX55 up with another and seeing how handing over between two access points works, but it’s currently not possible for me to say how easy or effective this is.

Amazon UK is currently settling the RT-AX55 for £120, while Box and Very are both selling it for under £100.

You should also be able to pick an RT-AX55 up from Scan for £99, although at the time of writing, the router was listed as only being available to pre-order.

Buyers in the United States can get the Asus RT-AX55 from Amazon and Walmart for the US RRP of $129. Although the RT-AX55 is currently out of stock at BestBuy, it is priced the same there, should they refresh their stock.

Check our chart of the best routers to see what other options you have. 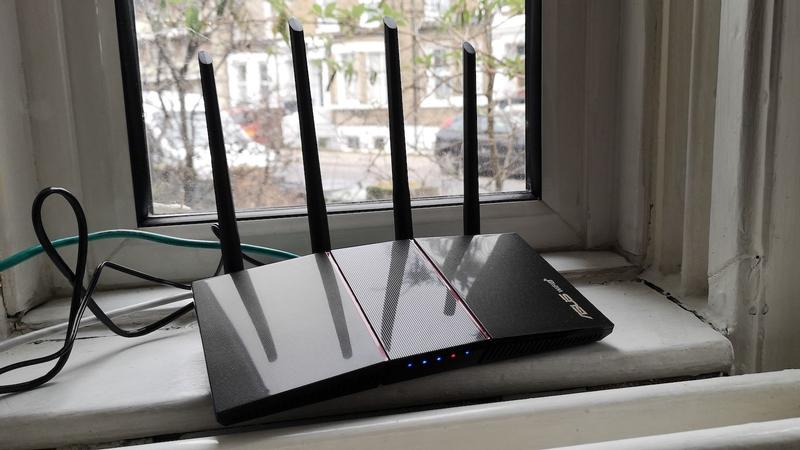 The Asus RT-AX55 is a very cheap and capable Wi-Fi 6 router that works well as a standalone device – plus it can cleverly be paired with another to create a mesh system.

This means it competes very well on price with more established mesh Wi-Fi systems like Eero, Netgear Orbi and Asus’s own ZenWiFi devices, although some buyers after a complete solution that works out of the box may prefer to go large on a bigger (and more expensive) option.

Downsides here really are negligible with the lack of a USB port one of the only standout cons.

If you’re looking around for a cheap Wi-Fi 6 networking solution, you will likely be happy to overlook things like no wall mount or 160MHz support, the Asus RT-AX55 will satisfy. 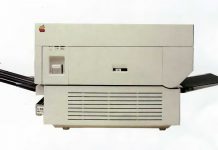 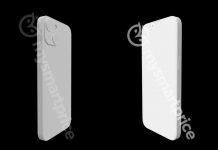 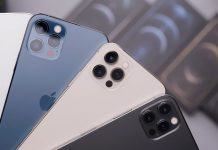 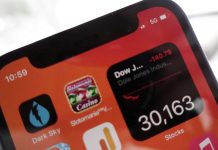 Here’s how small the iPhone 13’s notch could be 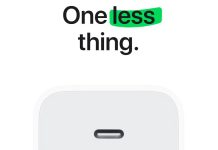 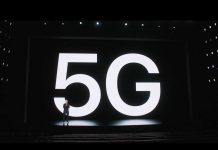 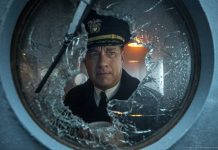 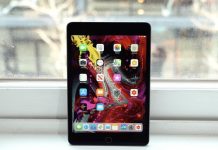 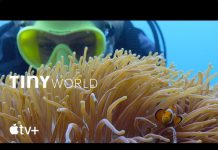 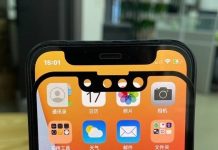 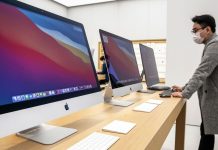 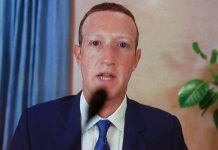