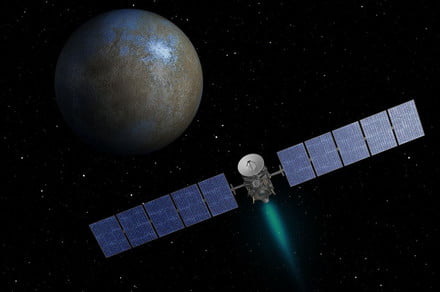 NASA’s Dawn mission, which aimed to study the largest bodies in the asteroid belt between Mars and Jupiter, has come to an end. After 11 years in space and a journey of 4.3 billion miles, the craft has run out of fuel and has now gone silent. Without the hydrazine fuel that the craft uses, it is no longer able to turn its solar panels toward the Sun to recharge or to keep its antennae pointed toward Earth, which means it can no longer send data back to mission control.

The Dawn spacecraft set out to study two particular bodies in the asteroid belt: The dwarf planet Ceres and the giant asteroid Vesta. Its flyover of Ceres not only produced detailed images of the surface, including craters and mountains, but also provided evidence that the dwarf planet may still be active. Its discoveries on Vesta were equally intriguing, with findings of landslides on the asteroid that suggest the possibility of hidden ice under the surface.

Launched by NASA’s Jet Propulsion Laboratory (JPL), the data collected from the Dawn mission has been used to study how our solar system was formed in its early years and has shown that dwarf planets could have had oceans on them at some point in their history. The mission was a personal one for the JPL researchers too, as Mission Director and Chief Engineer Marc Rayman shared: “The fact that my car’s license plate frame proclaims, ‘My other vehicle is in the main asteroid belt,’ shows how much pride I take in Dawn.”

Now that it is without fuel, the Dawn spacecraft will stay in orbit around Ceres where it has been located since 2015. Scientists took care to ensure that the craft could be disposed of safely and that it would not harm the dwarf planet, so it will remain a new “moon” for Ceres for many years to come.