Eddie Stobart, best known for its 2,700 green and red trucks plying Britain’s motorways, has stunned investors by suspending trading in its shares after an accounting investigation found profits had been overstated.

The company said there was a £2m error in its 2018 accounts, and that profits for the first half of 2019 would be “significantly lower” than forecast. Its chief executive, Alex Laffey, will stand down “with immediate effect”.

The revelations are a fresh headache for the fund manager Neil Woodford, whose funds own about 23% of Stobart’s shares. In a double blow for holders of Woodford funds, the value of another major holding, Industrial Heat, has also been downgraded to reflect the “slower progress of the company”.

Woodford’s fund administrators, Link, also issued a further note to investors confirming that it will remain closed until early December, and that it had continued to fall in value, losing 11% since dealings were suspended in June compared with a small rise in the FTSE All Share since then.

Eddie Stobart: Trucks & Trailers, and its spin-off, Eddie Stobart’s Excellent Adventures, were a stalwart of Channel 5 television programming and won millions of viewers, but the ride for investors has been painful.

Shares in Eddie Stobart, founded by its now-90-year-old eponymous former boss at the end of the 1940s, have tanked in recent years. From £1.60 a share in early 2017, they had fallen to 70p before trading was suspended.

A review of the company’s accounts, undertaken by the chief financial officer, Anoop King, who joined in April, found that 2018 operating profits were overstated by about 4%.

In a statement to the stock market, the company said it would be “applying a more prudent approach to revenue recognition … as well as considering the appropriateness of certain provisions”.

The firm’s half-year results were due for publication on 29 August, but will now be delayed until early September. Laffey, who ran Eddie Stobart for four years, will be replaced by Sebastien Desreumaux.

Brexit has played little part in Eddie Stobart’s woes. It said this month the nature of its business meant it was “well-placed to respond” to a UK departure from the European Union. Although it has trucking businesses in both the UK and continental Europe, only 2% of its revenues come from cross-channel traffic.

The company, which employs about 6,000 people, said it remained confident about its future. “The board has full confidence in the ability of Eddie Stobart’s management team to deliver an improved performance for the group going forward, and remains confident in the strength of the underlying business,” it said.

But Stobart’s suspension on the very same day as a downgrade in the valuation of Industrial Heat is yet another blow to Neil Woodford and his investors.

Industrial Heat, based in North Carolina, seeks to develop power from cold fusion, which promises an inexhaustible supply of clean, safe power. Despite the fact that numerous scientists have poured scorn on the idea, and Oxfordshire’s giant Jet (Joint European Torus) fusion project has failed to break even, Woodford invested about £32m into the company in 2015.

While Woodford’s investment in a highly speculative early-stage energy stock raised eyebrows, he is in interesting company; both Steve Jobs’ widow and the film star Brad Pitt are also understood to be significant shareholders in Industrial Heat.

Propelled by its celebrity and institutional investors, the valuation of Industrial Heat, which is not a quoted company, reached almost $1bn. But a review of the value of the company by Link and IHS Markit for Woodford has “determined that progress had not been at the pace anticipated at the time of the previous reviews”.

In a note to investors, Link Asset Services, which administers the Woodford funds, confirmed that the fund will remain closed to withdrawals until early December.

It said: “We continue to monitor progress of the repositioning of the fund’s portfolio to ensure that it is on track and our aim of lifting the suspension in December remains achievable. We currently remain of the view that this is a realistic timeframe, and therefore have decided that it remains in the interests of all investors for the suspension of dealings to continue.”

It said the value of holdings in the Woodford Equity Income fund fell by 11.2% between the date of its suspension on 3 June until 21 August. During the same period, the FTSE All Share index has risen by 1.5%.

• This article was amended on 24 August 2019. Jet stands for Joint European Torus, not Joint European Taurus as stated in an earlier version, and it is based in Oxfordshire, not Oxford.

Two children hurt, one in critical condition after Sevierville hit and run

3 Ways Grocers Can Evolve With the Transportation Ecosystem

Rare Ferrari F40 worth £1million erupts in flames in Monte Carlo – as man tries to put it out with garden hose – The...

Wainwright reduced to spectator’s role for pitchers’ tournament after being in auto accident | St. Louis Cardinals 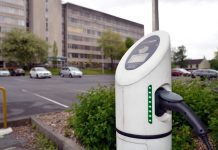 Charging electric cars in the city is not so simple

Gas heating to be banned in Scotland’s castles

Why and when this South Bethlehem street is going car free