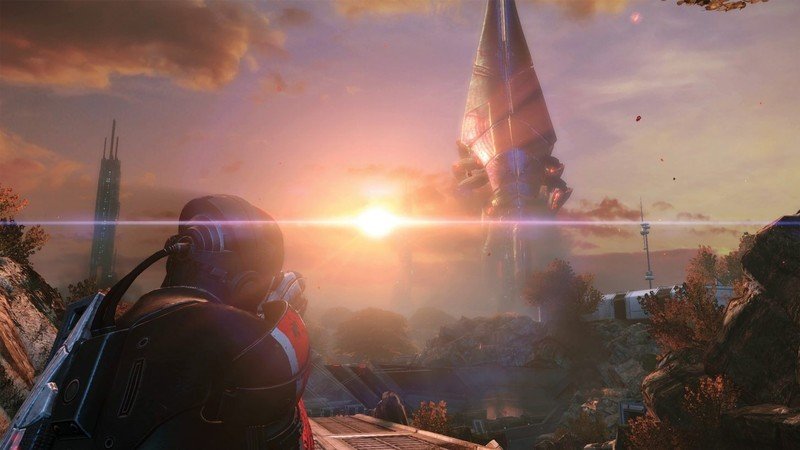 BioWare’s epic Mass Effect series is being remastered for Xbox One, Xbox Series X, and Xbox Series S. Mass Effect Legendary Edition compiles Shepard’s trilogy and all of its DLC into one package, now with visual enhancements and quality of life improvements to make the experience even better. Some of the changes made between the original and this remaster are instantly noticeable in screenshots, while others are more subtle. We’ll run through all of the changes you can expect to see when you pick up Mass Effect Legendary Edition on May 14, 2021. The Mass Effect trilogy by many is considered to be some of the best Xbox games you can play, so fingers crossed the remaster doesn’t disappoint.

Shepard and their crew are back

Mass Effect Legendary Edition lets us relive the iconic series exactly as it should be: in 4K with 60FPS support. Join Shepard and their squad on a galaxy-wide adventure to stop the Reapers once and for all.

I promise there’s more to its visual enhancements than lens flares. The entire Legendary Edition will support 4K resolution and feature improved visuals, textures, models, and more. The greater level of detail makes environments look fuller and denser, and characters look better as well. The games’ color grading, along with lighting and shadow effects, has received a facelift too.

BioWare will also be adjusting some cutscene angles; one, in particular, will no longer focus on Miranda’s butt during a very serious conversation.

In terms of performance, Mass Effect Legendary Edition will feature quicker loading times and can be played at 60FPS. Overall the experience will be smoother than the original.

A controversial change, the Mako’s controls have been updated. You either love to hate it or hate to love it, but the Mako’s janky controls were a staple of Mass Effect. BioWare implemented some quality of life improvements in the Legendary Edition that update the physics to make it feel more weighted, smoother camera operations, and HUD adjustments. Overall this should have the vehicle feel more realistic and less sluggish, but, wow, am I hoping it still retains some jankiness.

The long elevator rides, designed to mask loading screens, were another staple of the series that have been changed this time around. Due to new technology, loading screens aren’t as long as they used to be, meaning this cuts down drastically on the time our characters spend in elevators. To keep some of that witty banter in place, however, the dialogue will now be sped up so that it triggers quicker. Once the level loads in, you’ll be given a choice to listen to the rest of the dialogue or skip it.

Mass Effect 3’s multiplayer also won’t be returning. Given the logistics and time it would have taken to bring multiplayer to the Legendary Edition, it was eventually decided that it wouldn’t make the cut. Considering most fans play Mass Effect for the single-player anyway, I think it was the right decision to make.

Other gameplay changes include weapon balancing, more forgiving morality checks, squadmate/enemy AI enhancements, boss fight rebalancing, a dedicated melee button in ME1, and tweaking the cover system to work with ME1.

This isn’t so much a change, but the Extended Cut of Mass Effect 3’s ending will now be the trilogy’s default ending. When Mass Effect 3 first launched, its conclusion was derided for not living up to expectations, notably invalidating all of the player’s choices until that point, being asked to essentially choose which ending of three you’d prefer. The Extended Cut didn’t drastically change this so much as it extended upon it to give the ending and your choices more weight.

Though the Legendary Edition is set to feature all of the games’ DLC, it will not include Pinnacle Station from the first Mass Effect. As it turns out, the source code from the DLC was lost. When BioWare contacted Demiurge Studios, the original developer behind the DLC, they found their code was corrupted and beyond salvaging. The only way to get the Pinnacle Station into the Legendary Edition would be to remake it from scratch, and BioWare did not have the resources to do this.

How do you feel about these changes?

What do you think of the changes BioWare is making? Sound of in the comments below. It seems most of these are being made for the better, though I can’t help but feel that some of the color grading and visual changes will change the feel of certain scenes.