Having sold more than 2.5 million examples of the fourth-generation C-Class, Mercedes-Benz was never going to stray too far from it when developing the new W206.

The similarities between the old and new C-Class are clear even though it’s wearing a light disguise ahead of its premiere later this month. Its cab-backwards shape emphasises its classic rear-wheel-drive mechanical layout, while the design is instantly familiar, even if every panel and detail has been altered. Distinguishing features include new ‘power domes’ on the bonnet (standard across the range), larger wheelhouses and a wider front track.

Christian Früh, development boss of the past three C-Class generations, is our chauffeur for today. He tells us the saloon is 65mm longer than before, with an additional 10mm in its front overhang, 30mm within its wheelbase and 25mm within its rear overhang to move it away from the A-Class Saloon.

Inside, it’s clear to see that inspiration has been taken from the new S-Class in crafting the dashboard, which is dominated by a digital instrument display, a large central touchscreen and four central air vents that glow in shades of blue and red. 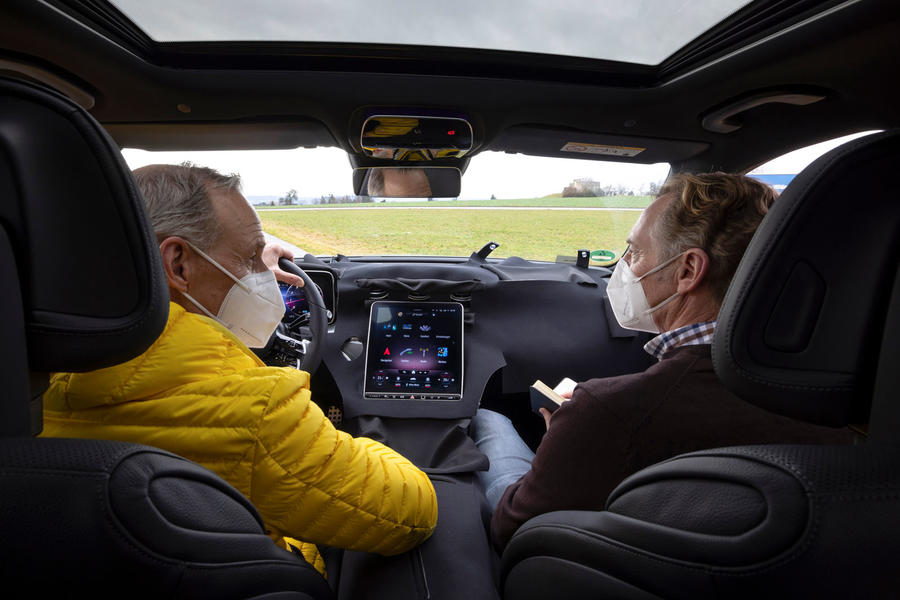 New features such as an augmented reality display are controlled by Mercedes’ latest MBUX system, which supports over-the-air software updates. It all looks thoroughly contemporary and is seemingly of suitably high quality, with soft-touch materials in places you expect and some not-so-pleasing plastics in those that matter less. It’s also virtually devoid of switches, with only the hazard lights appearing to have a physical button.

The new C-Class is based on the Modular Rear Architecture – the same platform used by the S-Class. However, unlike its posh relation, it uses a much higher percentage of steel than aluminium. It also has a completely new 48V electrical architecture. All of the engines are now mild-hybrid four-cylinder units, because Mercedes’ new straight sixes would have necessitated a much longer engine bay and front overhang.

The big news for the C300e petrol and C300de diesel plug-in hybrid models is that their battery capacity has been almost doubled, from 13.5kWh to 25.4kWh. That means an electric-only range of more than 62 miles, says Früh. The C300 4Matic that we’re in has a 255bhp 2.0-litre turbo petrol engine with a 20bhp integrated starter-generator (ISG). It also has an overboost function that liberates an extra 27bhp for up to 30 seconds under full throttle. It gets a nine-speed automatic ’box and four-wheel drive as standard.

The C300 isn’t the most powerful C-Class, but its ISG manages to endow it with a good burst of acceleration, accompanied by a typical four-pot thrum at middling to high revs in lower gears. It’s at lower revs, in a more subdued state, where it’s most convincing. A number of measures have boosted rigidity, which Früh claims has led to improved steering feel and handling precision. Our car isn’t fitted with the rear-wheel steering option, but it certainly appears responsive in the more sporting of its driving modes, with crisp turn-in and plenty of grip.