Series 29 of Top Gear is on the way, despite Covid filming problems, and we get the first video trailer of the telly madness to come.

There’s never any shortage of Top Gear programmes to watch, but it’s been a while since we saw anything new. But Top Gear Series 29 is on the way – and coming soon to BBC 1 – so it’s time to get a bit of interest rolling for the new series with the first video trailer.

Having found a workable trio in Freddie Flintoff, Paddy McGuiness and Chris Harris, the Beeb aren’t daft enough to change the lineup, so all three are back for Series 29. But there are changes to the format.

Due to Covid restrictions, the audience now consists a live audience in a drove-in setting but, it seems, allowed to stand in front of their cars rather than locked inside.

But some of the pre-filmed bits seem to have benefited from lockdown, with a giant Wall of Death built inside Alexandra Palace to allow a trio of cars to get up and play, and the trio also get to play around an empty Alton Towers in small EVs, and there’s another EV too with McGuiness showcasing an electric all-terrain Ice Cream Van.

There’s also a race downa ski slope in Cyprus in rental cars, and a proper tripe test of older 200mph supercars – the Ferrari F40, Jaguar XJ220 and Lamborghini Diablo – with one coming a proper cropper.

Expect another tease or two ahead of the arrival of Top Gear Series 29. 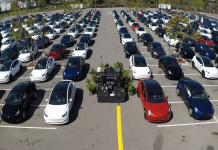