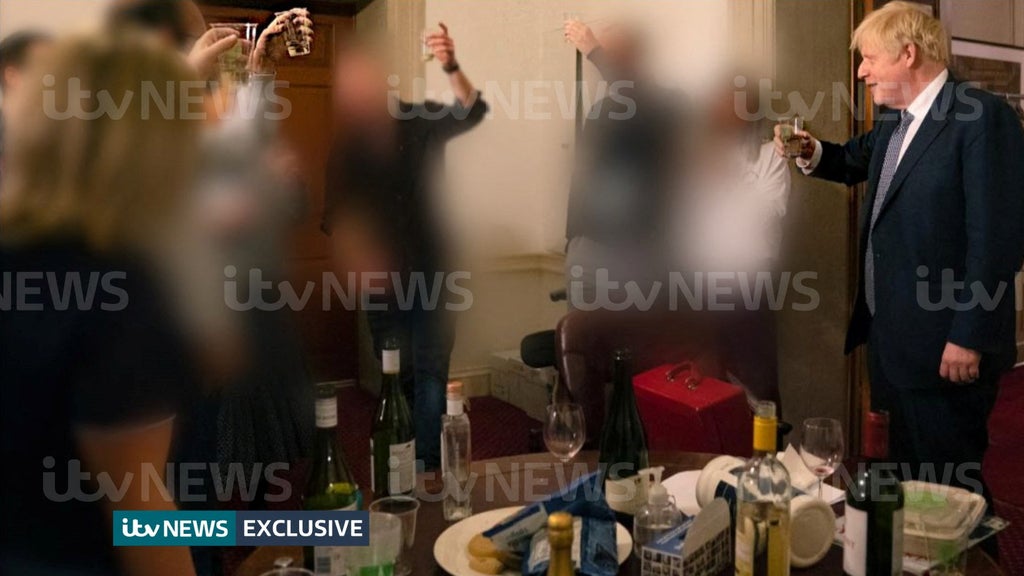 Fresh claims of chaotic lockdown parties and all-night drinking at No 10 have emerged as Boris Johnson braces himself for the publication of the potentially explosive Sue Gray report.

Former staffers described “wine-time Fridays” where bins would overflow with empty bottles, adding to the pressure on the prime minister as the report is expected to be published as early as Wednesday.

And an exclusive Savanta poll for The Independent found that two-thirds (66 per cent) of voters believe Mr Johnson should resign if he is heavily criticised. In findings that will trouble anxious Conservative MPs, more than a quarter (26 per cent) of those who backed the Tories in 2019 said they were less likely to do so again if Mr Johnson remains leader.

The figures were scarcely reduced from the height of the Partygate furore in January, and suggested that Mr Johnson has earned little credit from voters for escaping with only one £50 fine from the Metropolitan Police inquiry.

One Tory critic of the PM said it was “urgent” that MPs submit letters of no confidence, while another said it was clear the prime minister was now an “electoral liability”.

A series of No 10 insiders told BBC’s Panorama that they felt the gatherings were condoned by the prime minister, as he was “grabbing a glass for himself”.

They said Downing Street would be left a “mess” after the events, with some revellers staying overnight.

They said the culture was set by Mr Johnson himself, claiming he “wanted to be liked” and for staff to be able to “let their hair down”.

It came after a leaked photograph showed Mr Johnson raising a glass at a leaving do for former spin doctor Lee Cain eight days after the implementation of England’s second lockdown.

Amid growing backbench concern about the impact of Partygate, one senior MP told The Independent: “The whole thing is rotten. He’s got to go.”

Meanwhile, another veteran backbencher, Sir Roger Gale, said: “I think we are discovering that from being an electoral asset, he is becoming an electoral liability – something my colleagues may want to take on board. We can’t go on lurching from crisis to crisis.”

The Savanta poll found that 46 per cent of voters believe Johnson should have resigned after receiving a police fine for breaking Covid laws, with a further 20 per cent saying he should do so only if heavily criticised in the Gray report. Some 47 per cent of those who voted Tory in 2019 said he should go if condemned by Gray, against 46 per cent who want him to stay.

Fewer than one voter in five (19 per cent) believes Mr Johnson has told the truth about parties at No 10, compared to an overwhelming 67 per cent who think he lied. And 37 per cent said it would make them less likely to back the Tories if he remains leader.

One MP who has submitted a letter of no confidence in the PM told The Independent: “This poll tallies with what I am hearing on the doorstep. My colleagues urgently need to consider not just the moral implications of Partygate but the electoral implications as well.”

The Gray report will detail 16 events held in No 10 and Whitehall in 2020 and 2021, at a time when Britons had been told to stay at home and avoid social contact except for essential work reasons.

In an interim report in January, the senior civil servant blasted “failures of leadership” at No 10 and said some of the behaviour described was “difficult to justify” at a time when the public were under such tight restrictions.

Around 30 senior individuals have been warned they will be named for possible criticism in the full report, which was delayed for four months while police conducted their own investigation.

Downing Street was forced to deny reports that Mr Johnson had suggested at a meeting earlier this month that Ms Gray could ditch the full report, allegedly asking her: “Is there much point in doing it now that it’s all out there?”

It is expected that the report will be published within hours of being handed over to Mr Johnson, who will then make a statement to MPs before facing Conservative backbenchers in a meeting of the 1922 Committee of backbench Tories which could be crucial to deciding his fate.

Committee chair Sir Graham Brady must call a vote on the leadership if he receives 54 no-confidence letters from MPs, with Mr Johnson then needing a majority of MPs’ votes to survive.

Some 13 MPs have publicly declared they have submitted letters, though some may have withdrawn them, while others could have done so privately, Rumours circulating in Westminster on Tuesday suggested that Sir Graham may have amassed as many as 40 letters, though he never confirms the figure until the threshold is passed.

Tuesday’s Savanta poll found continued dissatisfaction with Mr Johnson’s performance as prime minister, though his overall rating of -26 (34 per cent thinking he was doing well and 60 per cent badly) was slightly improved on the -28 score he recorded in April.

But there was no clear frontrunner to succeed him, with voters choosing Mr Johnson as the best available Tory leader on 22 per cent, ahead of Rishi Sunak or Jeremy Hunt on 8 and Liz Truss or Sajid Javid on 6. Some 44 per cent of those who voted Conservative in 2019 said Mr Johnson was their favoured leader.

And Labour’s lead over the Tories remained at six points, with Keir Starmer’s party on 40 per cent (unchanged since a similar poll in April), Conservatives on 34 (unchanged) and Liberal Democrats 10 (down one).

Sir Keir Starmer’s satisfaction rating of -3 was better than that of any government minister polled.

But almost half of those questioned (48 per cent) agreed that Starmer should quit as Labour leader – as he has promised to do – if he is fined by Durham Police for sharing beers and curry with staff under Covid restrictions.

Voters overwhelmingly – 59 per cent to 17 per cent – said that the so-called “Beergate” incident involving the Labour leader was less serious than the Partygate events at No 10.