Want a sneak peek at a couple of the upcoming battery-electric vehicles from General Motors (NYSE:GM)? Look no further than this year’s Beijing Auto Show, where GM has unveiled two intriguing new plug-in Buicks.

One is just a show car, at least for now. But GM said the other is headed for production — and both incorporate some new technologies that hint at the potential for GM’s upcoming line of long-range electric vehicles.

The Buick Enspire concept may be a preview of an upcoming advanced battery-electric model from GM. Image source: General Motors.

Officially, the Buick Enspire is a “concept,” or show car. Automakers use concept cars for a few different reasons: Sometimes, they’re intended to show the direction of the company’s thinking around styling, technology, or both. But there are also times when a concept car is a veiled preview of something the company actually plans to put into production.

Right now, it’s not clear where the Enspire concept falls. (It may fall somewhere in between.) The Enspire is a two-row (5 passenger) crossover SUV with some details that are clearly just for show, including a touchscreen dashboard and claimed 5G connectivity. But on balance, the Enspire looks like something GM could put into production in a few years.

The Enspire’s dash is show-car futuristic, but other details suggest that GM might be considering a production version. Image source: General Motors.

GM said it’s a dual-motor battery-electric vehicle with all-wheel drive and a modular battery that gives it up to 370 miles of range. It supports some level of fast charging — GM said it can be recharged to 80% of capacity within 40 minutes — as well as inductive (wireless) charging.

GM said the Enspire’s two motors together generate maximum power of 410 kilowatts, or about 550 horsepower — good enough to go from 0 to 100 kilometers per hour (62 miles per hour) in just 4 seconds. That’s not quite “Ludicrous Mode,” but if and when the Enspire comes to market, I expect it would sell for a lot less than the $140,000 top-of-the-line P100D version of Tesla‘s (NASDAQ:TSLA) Model X.

Will we see something like it in the United States? We might, though it might not come here as a Buick. Buick is a big-selling brand in China, but GM might decide to turn it into a Chevrolet or Cadillac for American consumption. Either way, if GM does decide to build it, we’re unlikely to see it in the U.S. or China for at least a few years. 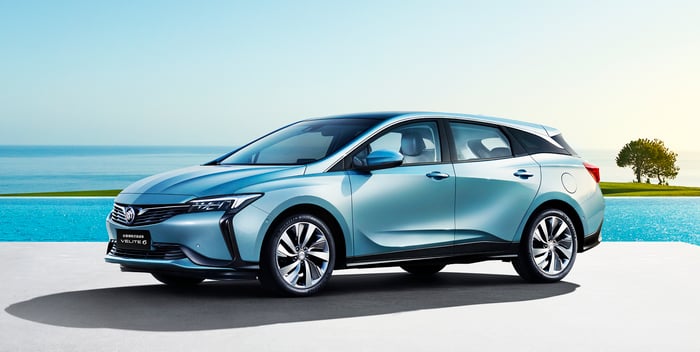 This is the Buick Velite 6, and it’s not a concept — though it is based on a concept vehicle that GM showed in China in 2016. There are two versions of the Velite 6, a plug-in hybrid and a long-range battery-electric, and both are headed for production.

GM has used the “Velite” name for a series of Buick hybrids in China. The current model, the Velite 5, is a Buick version of the Chevrolet Volt plug-in hybrid, but while the Velite 6 looks at first glance like it could be a Volt station wagon, it’s a completely different vehicle.

That’s what makes it significant. GM said the Velite 6 is based on an all-new architecture that isn’t shared with the Volt (or any other GM product), and that apparently will allow GM to build it as either a plug-in hybrid or a pure battery-electric vehicle.

The hybrid will come first. In hybrid form, the Velite 6 has two electric motors and a battery pack paired with a 1.5 liter four-cylinder gasoline engine. GM didn’t disclose the size of the battery pack or the car’s electric-only range, but it did say that the plug-in hybrid version of the Velite 6 will have a combined 435 miles of range. It also said that the Velite 6 hybrid’s battery pack is a “new-generation modular high-performance ternary lithium-ion battery pack” that will be built at a brand-new facility in Shanghai. 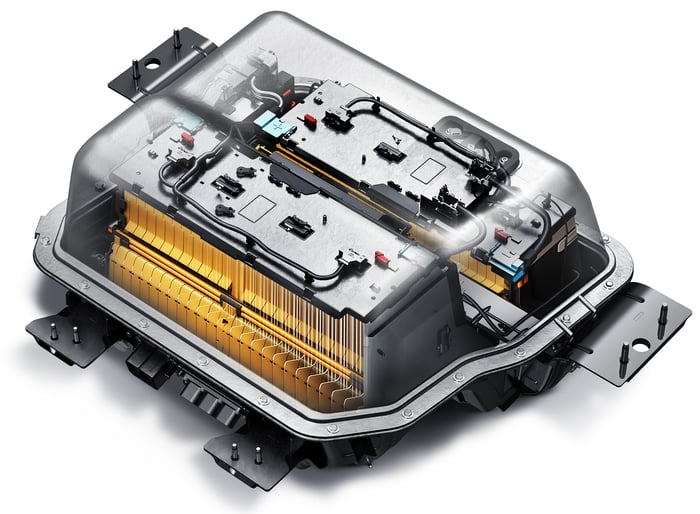 GM didn’t say much at all about the battery-electric version, other than that it will follow the hybrid’s launch, set for later this year, “at a later date.”

So, what does all of that tell us?

Our mission for electrification is simple. We are working to provide desirable, obtainable and profitable vehicles that deliver a range of over 300 miles. — GM CEO Mary Barra, last November.

GM plans to launch “at least 20” all-new all-electric vehicles by 2023. The first two, coming next year, will be based on GM’s existing technology as used in the Chevrolet Bolt EV. Most of the rest, GM said at the time, will use an all-new architecture and new battery technology that promises to deliver something that has eluded most electric vehicles to date: profitability. (The remaining few will have fuel cells instead of battery packs.)

We don’t know a lot about that new architecture, except that Barra said last year that new vehicles using it will begin to arrive in 2021. But it’s possible — very possible — that we’re seeing the very first use of the vehicle architecture, if not (yet) the advanced battery-electric system, in the hybrid Velite 6. (It’s also possible that the next-generation Chevrolet Volt will look an awful lot like a Chevy version of the Velite 6.)

If the Velite 6 is using that new architecture, that would suggest that GM has engineered the new architecture to allow both hybrid and fully electric versions of the same vehicle. That would be a sensible move, given that nobody knows how quickly consumers will embrace fully electric cars on a large scale — and knowing that different government and social pressures will mean differences in the pace of adoption between China and the United States.

Will something like the Enspire make it to production? It seems like a good bet — but if there’s a U.S. version, it might not be a Buick. Image source: General Motors.

It’s also possible — again, very possible — that the Enspire, with its 370-mile range and quick acceleration, is showing us the potential of the battery packs and drivetrain systems that GM now has under development, as well as a taste of what Barra meant when she said GM’s electric vehicles will be “desirable.”

Long story short? GM is serious about its commitment to advanced electric vehicles beyond the Bolt. Look for an impressive all-electric Velite 6 to make its debut at the Beijing Auto Show two years from now, for something like the Enspire to follow (maybe a year or two later), and for vehicles using the same technology to debut here in the United States around the same time.