Finding the right broadband deal can not only ensure you’re getting the most for your money, but also avoid the frustration of slow connections or data caps that mean you’re not able to watch that new Netflix series at the end of the month. Here’s our quick guide on the things you should consider when choosing a broadband package.

How do you use the internet?

As with pretty much all tech-related buying decisions, be it smartphones, laptops, broadband or more, the first thing to work it is how you’re going to be using the product.

In these days of the always-online society it can be easy to think that you need the fastest connection to survive, but if you only use the internet to check emails, browse the shops or spend a bit of time on Facebook then this isn’t really the case. Conversely, some of the cheaper packages that might seem tempting could be a real pain in the long run if you find you’re not able to stream those 4K UHD movies due to the speed of your connection.

In days gone by, the most important principle was how much data you were allowed for downloads each month. But with pretty much every major provider now offering unlimited data as standard, the new frontier is the rate at which you can use your connection.

What are the different types of broadband available?

There are three main options currently available: ADSL (the standard router that connects to your phone line), Fibre (much faster speeds that require a dedicated connection) and Cable (again a dedicated line that is usually part of a package, such as those offered by Virgin Media).

ADSL is the most common connection type (although being quickly replaced by fibre as the faster services reaches more areas) and only requires the use of a standard home phone line to work. Due to using this technology it is limited to a maximum speed of around 20Mbps for downloads and 1Mbps for uploads. This is more than enough for social media, browsing the web and streaming HD content on YouTube, Netflix and other services. In fact, Netflix states that to stream HD movies and TV shows you’ll want a minimum of 5Mbps.

Of course, it’s unlikely that you’ll be able to attain those top speeds unless you happen to live right next to the telephone exchange, as the further down the line you are the more likely your speeds will be much slower. This is one of the main reasons that those living in rural areas can struggle to get a solid, fast connection.

To see the kind of speeds you can expect from a standard ADSL connection there are usually widgets on the provider’s sites into which you enter your postcode. We’d recommend using the Ofcom Mobile and Broadband checker, as the independent nature of the service should mean it is free from any bias.

Bear in mind that the more people you have connected, either through laptops, tablets or smartphones, the slower the speed will become as it is essentially divided up between you. With this in mind, if you’re a family with a few children (especially if they like to play games online) then you may find that a fibre connection is the better option.

Should you want to look into ADSL connections, there are a variety of deals on offer at the time of writing. For example, Sky has its Essential package that features average download speeds of 11Mbps and costs £20p/m with a setup fee of £19.95, while Plusnet has its Unlimited tier that offers 10Mbps average speeds and costs £19.99p/m with line rental included. 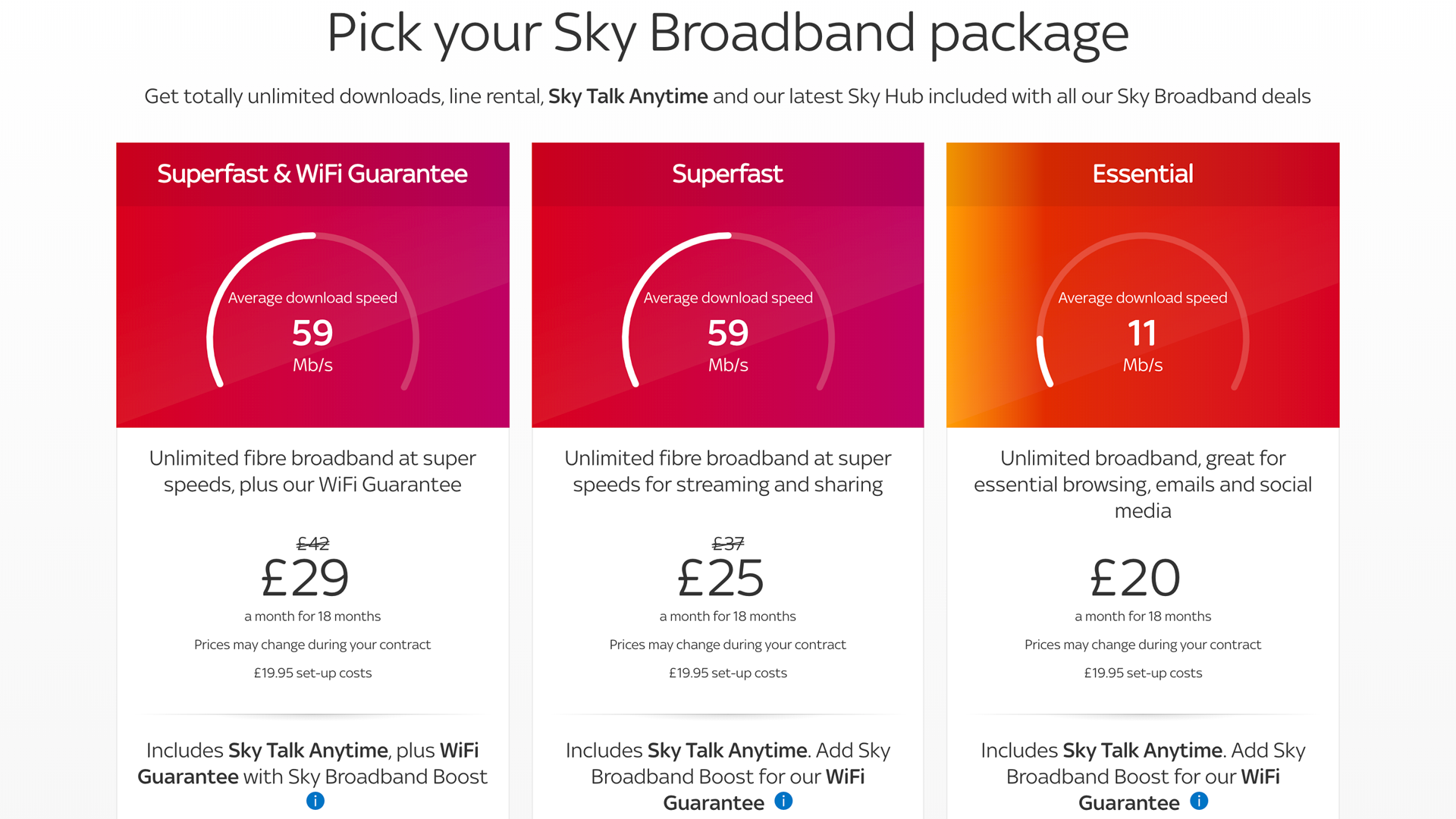 As the name suggests, this type of connection uses an optical fibre cable for your connection, which is capable to delivering much faster speeds than ADSL. There are actually tiers within most fibre offerings, with names like Ultrafast and Superspeed. The general rule of thumb seems to be that the standard fibre connection will deliver an average of around 35Mbps while the top-tier variants will nearly double that at around 65Mbps.

These speeds make fibre the perfect choice for people who want to stream HD or 4K movies and TV shows (Netflix recommends 25Mbps for 4K), play games online, and have a stable connection when video-calling friends and family. It also makes it much faster to download files to your smartphone, tablet or PC when at home.

While fibre is being deployed across the UK, there are still many areas that have yet to receive the technology. So, to see if you are one of the lucky households, you’ll need to check the availability by entering your postcode into the checker found on each provider’s site.

With fibre being quicker, it’s of course more expensive. But there are very good deals to be had if you look around. We found BT was offering its Superfast Fibre for £31.99p/m (including line rental) and promising average speeds of 50Mbps, or there’s the Unlimited Superfast Fibre from TalkTalk which costs £24.45p/m (including line rental) and promises average speeds of 67Mbps. 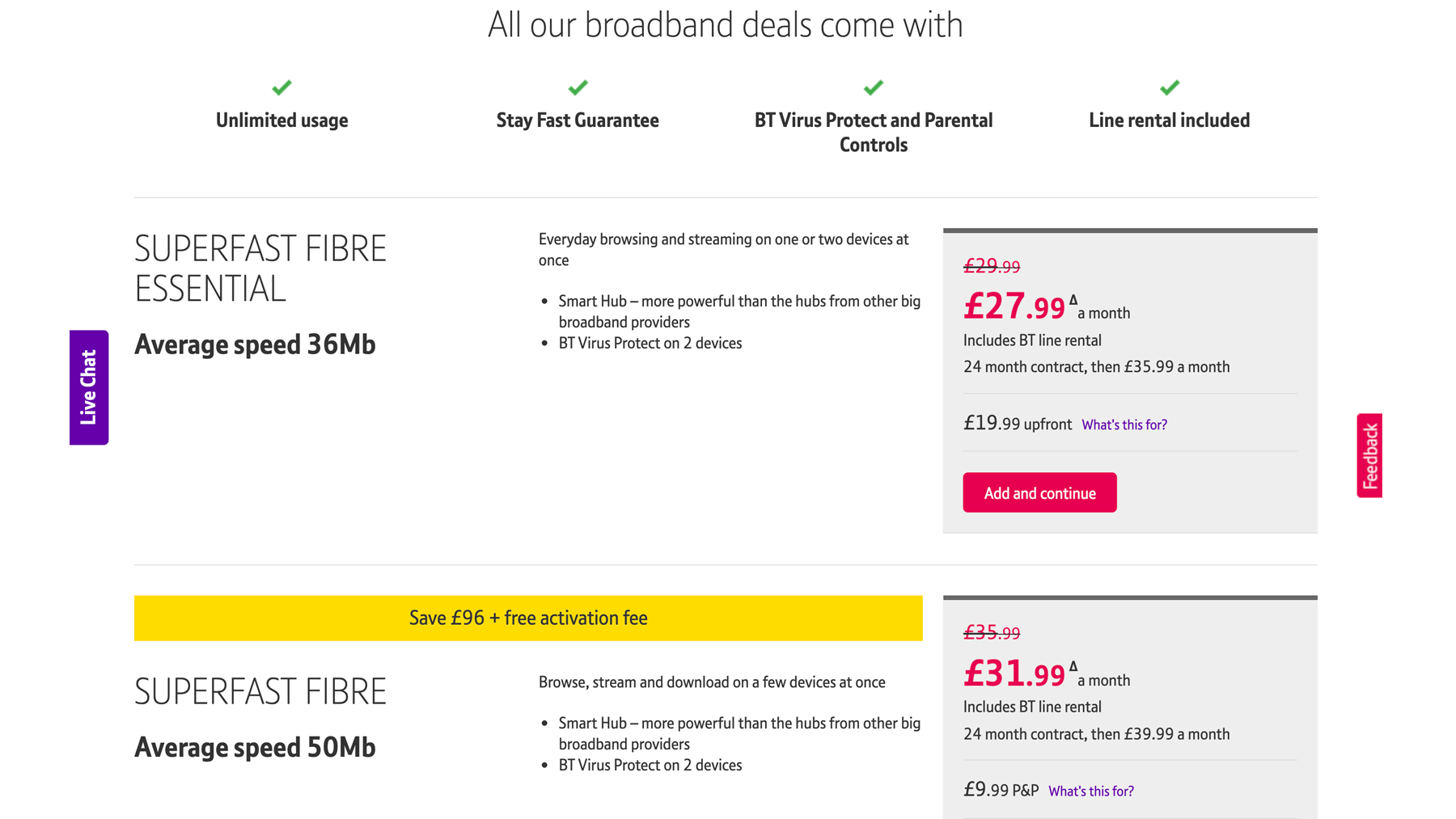 This is another option, albeit one that’s limited to very few providers and only in certain areas. Faster than ADSL, cable runs the connection through a dedicated cable that negates the need for a telephone landline. Usually offered as part of a package deal, the most common cable provider in the UK is Virgin Media, whose offerings at the time of writing included the M50 package which provides average speeds 50Mbps for £37p/m or the M350 tier with average speeds of 362Mbps for £52p/m. 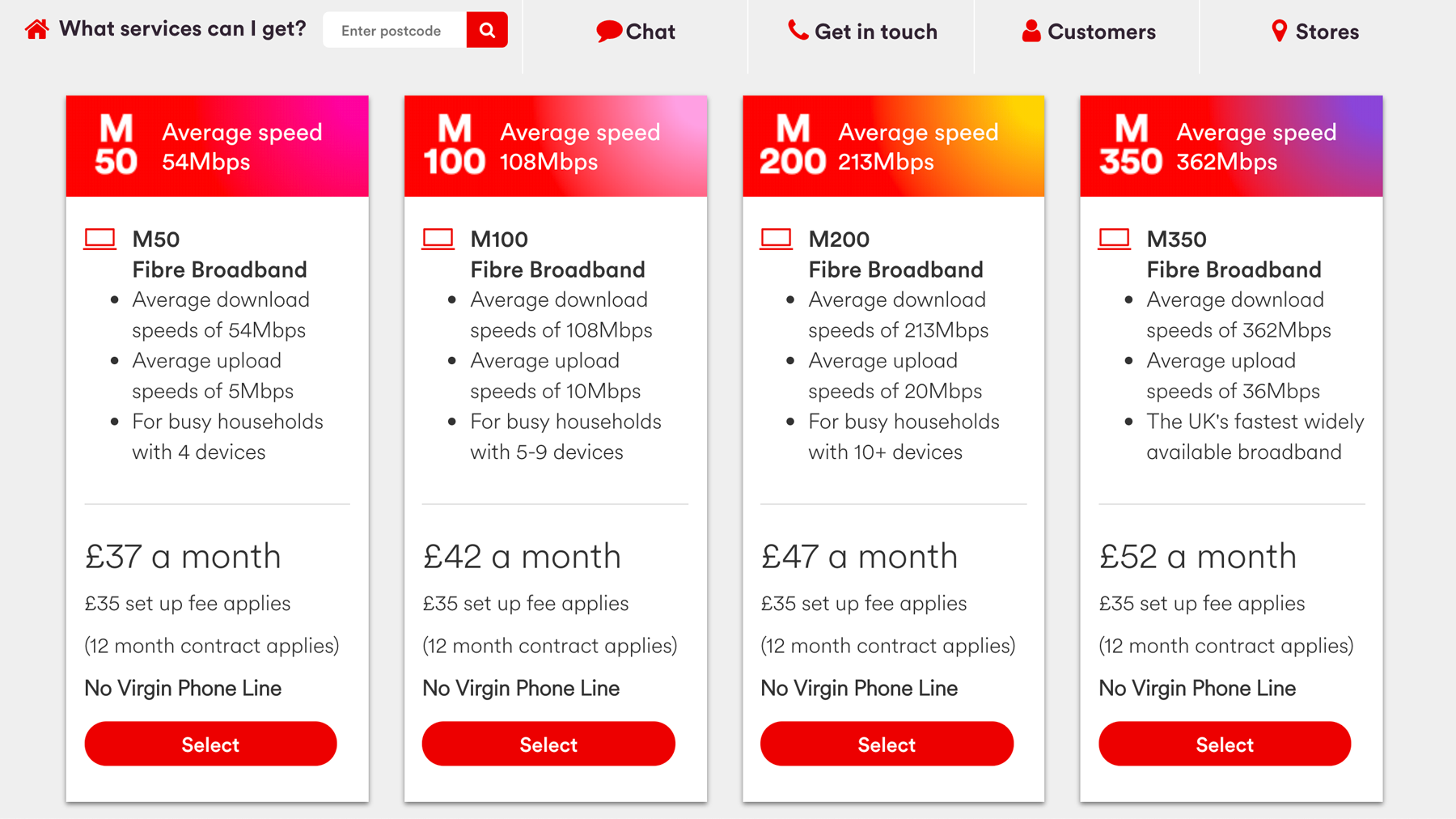 As you can see, those top speeds are very fast indeed, making them ideal for people who want to stream games, watch 4K movies all the time or download large files quickly. It’s also well suited to larger families or households who want top speeds while all accessing the network at the same time.

If you’re happy to move your mobile phone, landline or TV subscription to one provider then it’s well worth considering the various bundled deals that are on offer. All of the major players have them, with BT combining broadband, home phone, and BT TV, while Virgin and Sky doing likewise with their particular TV packages.

Combining the services can result in cheaper monthly bills while also giving you some free bonuses if you find a good deal. These change all the time, with regular promotions and discounts, so take a look at Best broadband deals or Best TV and broadband deals for the latest offers.

The Best iOS 14 Tips and Tricks