There have been given quite a few exciting features introduced in the past Google’s Pixel Feature Drops. From improved GPS to battery optimization, adaptive sounds, and a whole lot more – there’s never a dearth of features to talk about. One of the many exciting features is auto-framing on Google Duo. What is it and how can you enable it? Here’s all you need to know.

What is auto-framing on Google Duo?

For the uninitiated, when you’re on a Google Duo video call, the auto-framing feature keeps you centered in the frame even if you’re moving about, much like in a David Fincher movie.

The convenience of this feature can hardly be overstated. Users can walk about the room and stay hands-free as they carry on with other activities, all the while staying within the frame and completely visible to the people at the other end.

How to enable auto-framing on Google Duo

If you have a device that supports Google Duo, enabling the auto-framing feature is quite easy. While on a video call, tap the screen to bring up the menu bar at the bottom. Then tap on the three-dot menu on the right.

Slide through the options till you get to Auto-framing. Tap on it to enable it. 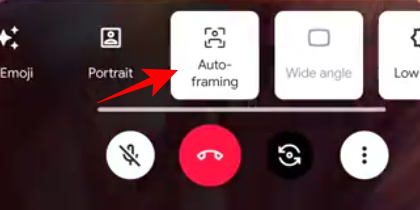 This feature works only with the front-facing camera. Auto-framing doesn’t work when the rear camera is on.

Which devices have access to auto-framing on Google Duo?

But multiple sources have confirmed that it is available on other Samsung Galaxy 20 devices as well. This doesn’t come as a surprise since many Google features come integrated directly into Samsung devices, including Google Duo.

Have you tried out the Google Duo auto-framing feature yet? Has it improved your video call experience appreciably? Let us know below.