Once a year Apple rolls out a major update to tvOS, the operating system software that runs on the 2015 and later Apple TV models. These (free) full-version updates introduce new features, as well as tweaking the interface and fixing bugs. The latest of these is tvOS 14, and it launches today!

In between the yearly updates, smaller point updates roll out, such as (in the near future) tvOS 14.1. These tend to have fewer eye-catching features but they are important too, because they often include security fixes. It’s a good idea to keep your Apple TV up to date with the latest tvOS updates.

In this article we explain how to update tvOS on your Apple TV – which, as of today, means installing tvOS 14. (If you’d like to try out forthcoming versions of the software before they launch, you need to install a tvOS beta.) We also address any issues you might encounter with the update process.

Note that tvOS is only available on Apple TV 4K (2017) and Apple TV 4th generation (2015). Older Apple TVs have their own software, called simply Apple TV Software, but this isn’t updated very often. However, if your device is experiencing performance issues it’s worth checking that you’re running the most up-to-date software, something we explain below. 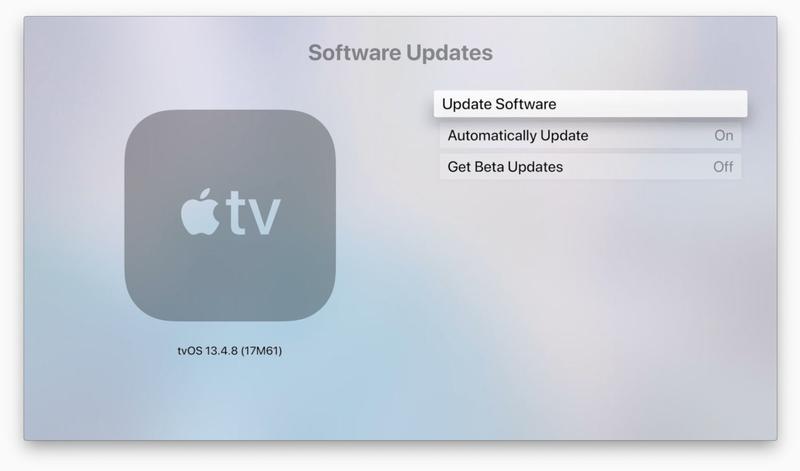 If you have a newer Apple TV – one launched since 2015 – this is how to update its software.

The Apple TV may restart during the process, and you’ll be presented with a progress bar indicating the status of the update.

To turn on automatic updates go to Settings > System > Software Updates and turn on Automatically Update.

How to update the software on Apple TV (2012 and older)

If your Apple TV is one of the older models that pre-dates the App Store interface, this is how to update it.

To turn on automatic updates, go to Settings > General > Update Software and turn on Update Automatically.

What is the latest version of Apple TV software?

When Apple launched the reinvented Apple TV in 2015 it created tvOS, the iOS like software interface for it. tvOS started at version 9, so there won’t be any older versions than that.

The Apple TV 3 models run version 7.2.2 currently. It now includes the Apple TV app, which suggests that the new TV+ subscription content will be available for owners of the Apple TV 3.

You can find a list of available software updates for 2nd and 3rd generation Apple TVs here.

How do I know what version of Apple TV software I’m running?

On an older Apple TV:

Sometimes updates can fix problems and sometimes they can cause them. It’s usually wise to wait a little while before updating your Apple TV just in case there is an issue with a new update. (Although if you’ve it set to automatically update this advice may come too late!)

If you do encounter any issues the advice below should help.

If you get a white screen with an image of a white cord and the iTunes icon, that means the software update has failed. You will need to connect your Apple TV to your computer and restore it via iTunes.

If an update has ‘bricked’ your Apple TV – in other words, it no longer turns on and might as well be a brick – then you need to attempt to restore it by plugging it in to a Mac or PC and using iTunes to restore it to factory settings. See below.

How to restore your Apple TV to factory settings

If you have to restore your Apple TV to factory settings:

If you need to restore your Apple TV through iTunes here is how to do that.

Apple, Microsoft, Amazon and Alphabet are buys at these levels, Jim Cramer says

How to use Apple Cash Family

Which Apple Watch color should you get?