Apple has revealed the newest iterations of its iPad lineup, with a significant performance boost for the standard 10.2in version and a completely new design for the iPad Air. In this article we see how the two compare, and offer advice on which one you should buy.

The new 10.2in iPad (2020) comes in two storage variants, each with either just Wi-Fi or Wi-Fi and cellular configurations. Here are the prices:

This is good news for UK consumers is it means the entry-level model is now £20 cheaper than the previous version, although sticking with 32GB of storage does seem a particularly mean move from Scrooge McApple.

Prices see quite a sharp increase with the new iPad Air models, presumably due to the major redesign that the platform has been given this year. Here is a breakdown of the range:

This means that the iPad Air base model is now £100/$100 more than last year, albeit with some significant improvements.

You can order both directly from the Apple store, with the iPad 10.2in (2020) having a release date of 18 September while Apple lists the iPad Air (2020) as “available in October”.

While the internals of the iPad 10.2in (2020) have seen some upgrades, all of the external factors remain pretty much as they were with the previous model. This means you get a 10.2in Retina display, with thin bezels on the top and bottom of the panel so that the Touch ID-enabled Home button and front-facing cameras have somewhere to live. 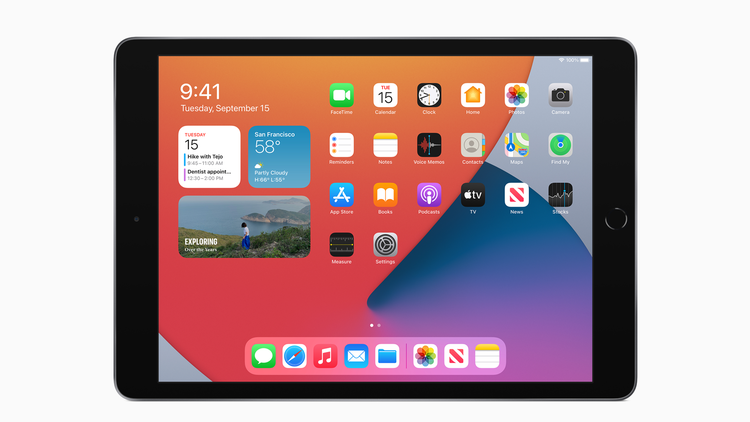 The casing also hosts twin speakers, a Lightning connector, a Smart Connector for the Smart Keyboard, volume and power buttons, plus a 3.5mm headphone jack. Apple offers the iPad 10.2in in its three traditional colours of Space Grey, Silver and Gold, with the last two sporting white surrounds for the front panel.

It’s all change with the iPad Air, as Apple moves it closer to the iPad Pro range in features and price. The 10.9in Liquid Retina display is now unencumbered by a Home button, as the fingerprint sensor has been incorporated into the power button on the top edge. The result is an all-display front panel that looks just the same as on the 11in iPad Pro. You’ll be able to show off your new purchase, though, due to some rather lovely liveries, including Rose Gold, Green and Sky Blue. 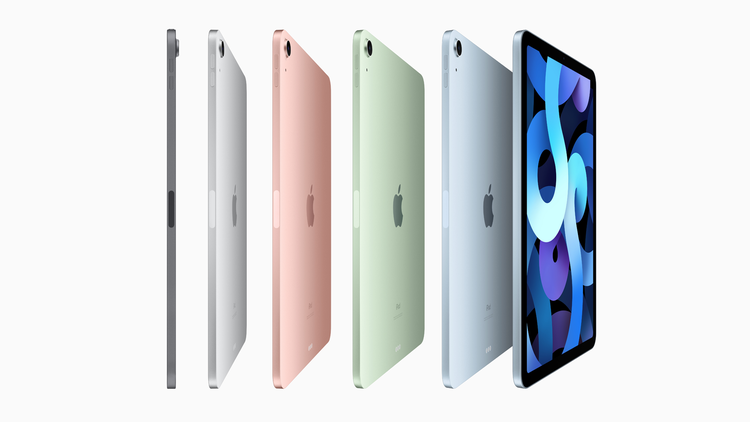 Stereo speaker grills adorn the bottom edge, either side of the new USB-C connector that replaces the Lightning port in the old Air. There are also volume buttons and a magnetic connector that works with Apple’s Magic Keyboard case, but sadly this iteration bids farewell to the 3.5mm headphone jack.

Apple Pencil 2 compatibility is also now on the Air, with the 10.2in iPad having to make do with the first-gen stylus. 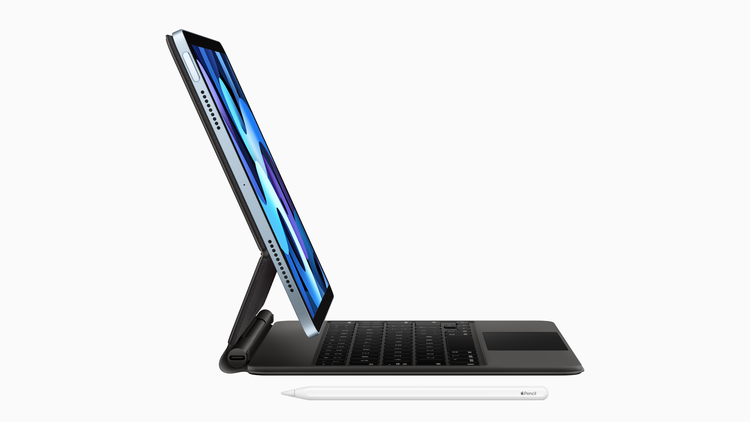 Here’s how the dimensions of the two models compare:

As you can see, the iPad Air (2020) offers a lighter and more compact frame, even though it sports a larger display, but both are devices that can easily slip into a backpack without giving your shoulders anything to worry about.

While the 10.2in iPad’s Retina display can match the 10.9in Liquid Retina one of the Air in terms of PPI (264) and brightness (500 nits), it’s bested by some additional features that make the Air’s superior.

The most obvious one is that the Air display is fully laminated, meaning there’s no air-gap between the glass and the digitiser so it feels like you’re touching the pixels themselves. It’s not a deal-breaker, as it only takes a few minutes to get used to the unlaminated display and then you’ll probably never notice it again. But if you intend to make heavy use of the Apple Pencil then it could be a deciding factor. 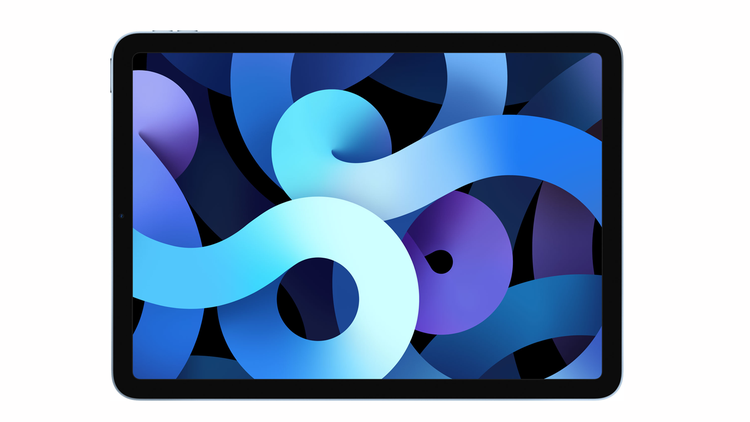 Also, the Air display comes with Wide Colour (P3) and True Tone technology that matches the whiteness of the screen to the colour temperature of the room. This might not sound like much, but it can help prevent your eyes getting tired during long sessions with the device. This can also be helped with the anti-reflective coating that appears on the Air.

Whichever device you choose, we’re sure you’ll be very pleased with its display, but there’s no doubt that the one on the Air is not only bigger, it’s also better.

Cameras are an area that’s becoming increasingly important on iPads, and Apple definitely seems to be favouring the Air in this department. On the front of both you’ll find a FaceTime HD camera, but where the 10.2in iPad maxes out at 1.2MP for photos and 720p for video, the Air goes to 7MP and 1080p respectively.

Both offer Live Photos, Burst Mode and Retina Flash, but the Air comes equipped with Wide colour capture and Smart HDR for photos and videos as opposed to only HDR on photos that the iPad 10.2in can muster.

Move to the single rear shooters and the gulf becomes more pronounced. Where the 10.2in’s main camera features an 8MP sensor and f/2.4 aperture, the Air boasts 12MP and f/1.8. Live Photos are stabilised on the Air but not the 10.2in iPad, plus there’s wide colour for photos and Live Photos, autofocus with Focus Pixels, Smart HDR for photos, and a larger capacity for Panorama shots. 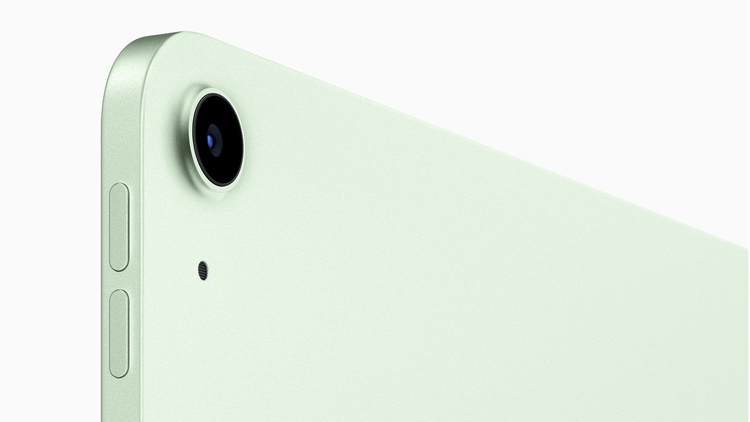 So the Air definitely wins in this department, but bear in mind that these features only matter if you intend to use them. Should you just want to take quick snaps with your device, record family videos or chat on FaceTime, then the 10.2in iPad will do the job very nicely.

One of our main bugbears with the previous iPad 10.2in was the ageing A10 processor that Apple used. Thankfully, this has been addressed, with the inclusion of the much more powerful A12 Bionic chip that made its debut with the iPhone XS, XS Max and XR.

This bump in performance means that not only is the 10.2in iPad (2020) now a very capable device, but it should also be future-proof for a good few years to come. 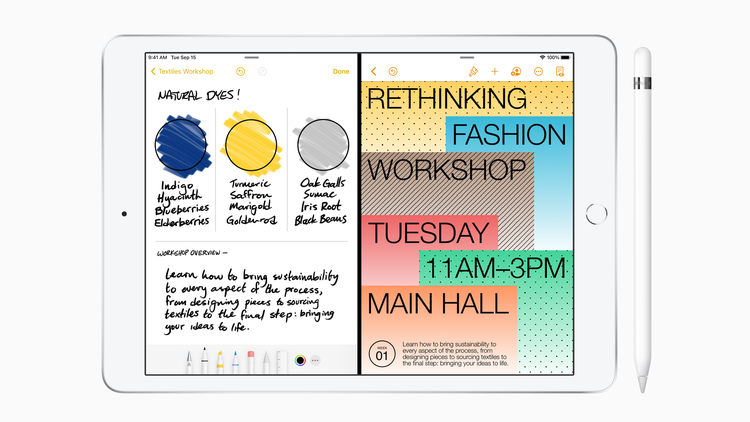 We’re not quite so impressed by the storage options, as Apple has decided to keep the baseline offering down to 32GB. This means the 8th-generation iPad now has the same baseline storage capacity as the 5th-generation model released back in March 2017.

It’s all well and good touting the capabilities of a device, but if you keep having to manage the paltry storage then it quickly begins to lose its lustre. Upgrading to the 128GB model is the sensible option, but it’s disappointing that Apple would cripple its entry-level model just so it can slap a low price on its adverts.

The iPad Air also gets an upgrade in the processor department, with the brand-new A14 Bionic chip making its first appearance. This features the latest 5-nanometre process that allows Apple to fit incredible levels of power into a smaller construction. 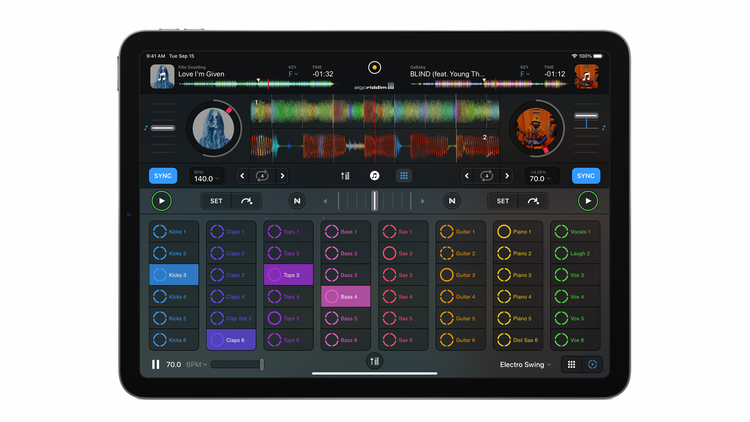 Storage is more generous than on the 10.2in iPad, with 64GB or 256GB options available. The Air also has Wi-Fi 6 and Bluetooth 5.0, while those on the cheaper model will find the Wi-Fi 5 and Bluetooth 4.2 technologies still have plenty to offer.

Here’s a more detailed outline of the technical specifications.

The lines have been drawn a little clearer this year, with Apple clearly separating the iPad and iPad Air stables. If you want a straightforward device for watching Netflix, playing games, surfing the web, converting into a makeshift laptop or using as a notepad and sketchbook, then the 10.2in iPad (2020) is a great option. The new processor can handle plenty of work, and the price makes it affordable even when you consider that you really do need to go for the £429/$429 128GB model.

The Air is basically the iPad Pro junior now, thanks to the Pro-style design, latest A14 Bionic processor, plus Magic Keyboard and Apple Pencil 2nd generation support. Sure, you don’t get LiDAR scanners and Face ID, but it does all the important things that a Pro offers, and you get some rather attractive colours into the bargain.

Both iPads are very capable machines, so this year it really does come down to what features are the most important to you and how much you’re willing to spend.

How To Fix Apple Watch Battery Problems In watchOS 7 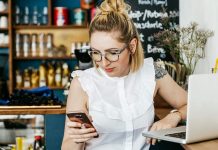