BlackBerry used to be a household name in the mobile industry, and a new device under the brand name could do well to reinvigorate the excitement people had for their BB phones.

But, is a new BlackBerry device still on the way? Possibly, but there’s no guarantee at the moment. Last year a company called OnwardMobility announced that it would be launching a phone under the BlackBerry brand in 2021. On top of that, it would also have a physical keyboard like the BlackBerry phones you may remember so fondly, and that it would have 5G. Potentially making it a perfect choice for those in enterprise.

A new BlackBerry device may still be coming

There hasn’t been a confirmed cancellation. Which is a conclusion one could draw from the continued months of silence. But then that would be mere speculation. The thing is, OnwardMobility said the device would be coming the first half of 2021. And so far it hasn’t said anything about an upcoming phone since the initial announcement. Which was last August. So is there an upcoming 5G BlackBerry with a physical keyboard? Maybe.

OnwardMobility may have stayed quiet about any of its future plans for BlackBerry. But it does seem to be staffing up the company. In a statement to PC Mag, OnwardMobility said that it was looking to fill key roles within the company, conducting interviews and hiring some new employees.

Gerard Boutibonnes is the European Director, and previously worked for TCL. This doesn’t confirm that OnwardMobility is close to launching an upcoming 5G BlackBerry. It does at the very least though suggest that it’s finding the proper staff for a product that’s mobile device-related.

It’s hard to say, really. With little to no communication from OnwardMobility about its BlackBerry plans, all anyone has to go on is the initial announcement and the company’s recent staffing activities.

If it has been, and is just choosing to keep things under wraps till the absolute last possible moment, consumers may very well get a 5G BlackBerry before the start of the Summer. Time will tell. 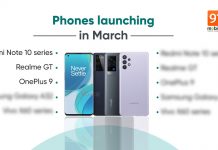