NEW DELHI: Consumer electronics giant LG has recently unveiled its first smartphone with a rotatable screen — LG Wing as part of its Explorer Project program. At the same event, the company also showcased another unique smartphone design. The phone design showcased by the company shows the phone’s screen which extends once it is being pulled from the bottom. Once the screen is pulled out completely it turns up to brighten the screen. The teaser shared by the company ends with the caption ‘Hold your Breath’.

At the time of launch of the LG Wing,the company said that the objective of its explorer project is to explore and inject new life into areas left untapped and also reshape and expand the present user experience. The company also mentioned that the project will solely focus on new usability which is discovered with innovative designs. LG also said that the design teased is for the new and upcoming smartphone of the company.

The South Korean tech giant did not reveal any details about the phone or how the display will work. Along with this, the company has also not shared any timeline for the launch of this new smartphone.

LG launched its first ever and unique dual screen smartphone as the part of its new Explorer project. Called LG Wing the smartphone enables users to to use the device in Swivel mode in which the front of the device rotates clockwise 90 degrees enabling users to interact with the second screen while having uninterrupted content on the main screen. 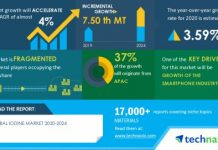