All too often, when we evaluate smartphone cameras, we are looking at incremental improvements. Each year, smartphone cameras get slightly better than their previous models, but the only way to determine that is to do a lot of side-by-side comparisons. Most of the time, the improvements are small enough that if you buy a new phone each year, you might not even notice that the camera is getting progressively better.

LG’s new $900-and-up V40 ThinQ is different, however. In addition to a better standard camera than its predecessors, the V30 and the G7 ThinQ, the V40 has two additional rear cameras, which provide different perspectives and fields of view. In total, the V40 has five different cameras: three on the back, and two on the front, which give its camera system a level of versatility that other phones don’t offer. It’s not only an upgrade in the camera quality, it’s an upgrade in what you can actually capture with your phone’s camera.

We’ve seen phones with multiple camera systems for years; sometimes they give us a closer view on our subject, like Apple and Samsung’s setups, sometimes those extra cameras are used for vague things, like “providing extra detail,” as in the case of Huawei’s P20 Pro. But the V40’s camera setup is unique: it has a standard camera for normal shots, a super wide-angle camera for capturing a wider field of view, and, in a first for LG, a telephoto camera to get closer to your subject. It’s like having a camera bag full of lenses built right into your phone. Similarly, the front camera system has both a standard lens and a wide-angle option to capture more in the frame.

That kind of flexibility is unique in the smartphone world, and it separates the V40 from an increasingly homogenous field of phones. 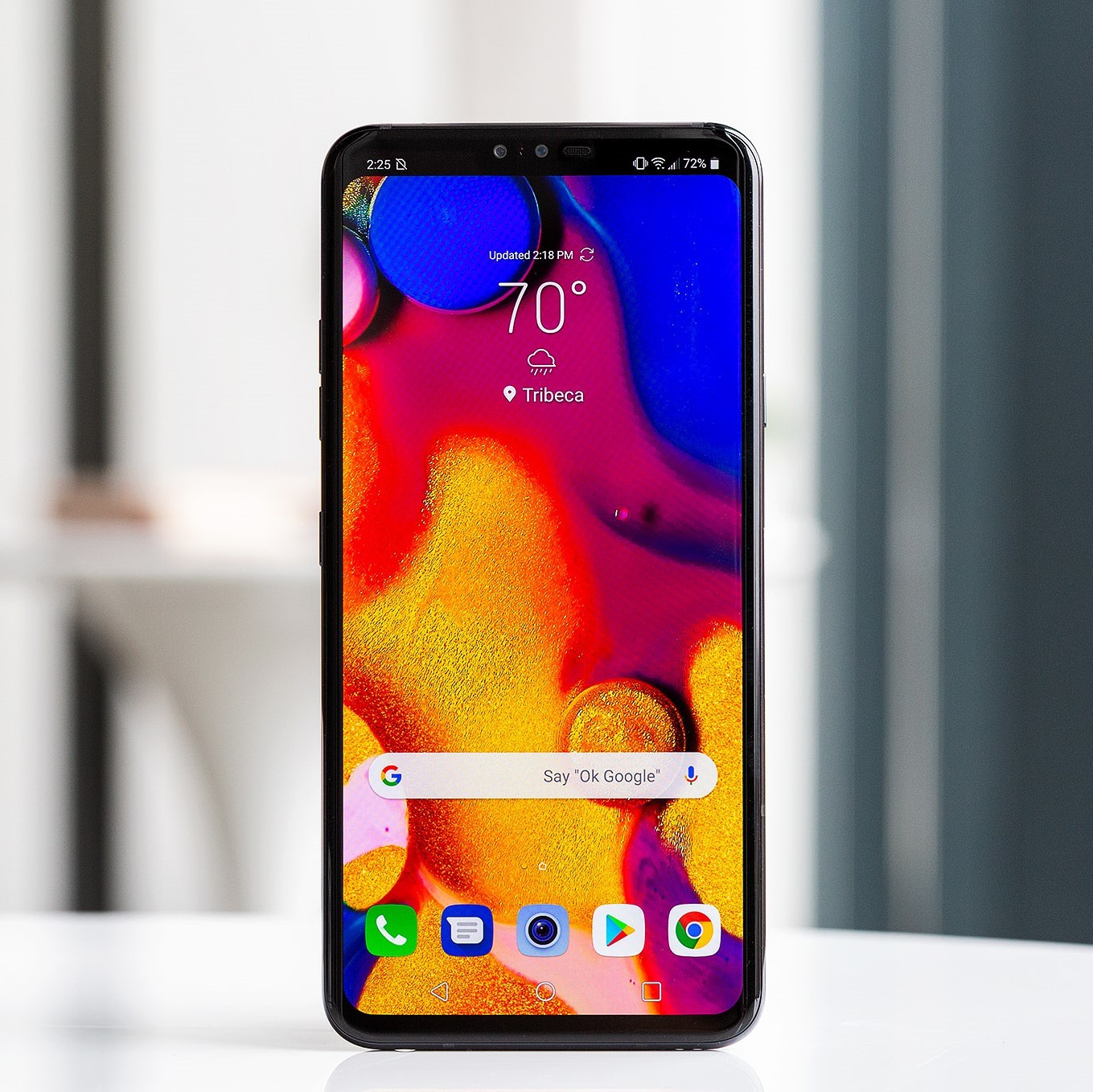 Aside from the new camera set up, the V40 will look very familiar to anyone that’s been paying attention to the smartphone world this year. It has the same basic design and construction as the G7, with an aluminum frame and glass panels front and rear. That means it scratches easily: my V40 review unit already has a couple of scratches on the back glass, and I’ve only had it for about a week. LG isn’t alone here – virtually every modern phone seems to scratch easy now — but it’s still a consequence of all-glass phones and it sucks.

The V40’s 6.4-inch screen is similar in size to Samsung’s Note 9, but the notch at the top and small bezel at the bottom give the V40 a slightly smaller footprint than Samsung’s behemoth. The phone itself is also more than an ounce lighter than the Note 9 or iPhone XS Max, which makes it easier to hold all day long. Like the Samsung, this screen is an OLED panel, so it has rich colors, deep blacks, and excellent viewing angles. It’s noticeably better than the V30’s OLED screen, and I don’t have any complaints with it.

The V40 is also familiar under the hood: it’s running the same Snapdragon 845 processor as every other Android flagship in 2018, paired with 6GB of RAM and 64GB of storage. There’s a microSD card slot for storage expansion, wireless charging, IP68 water and dust resistance, and a 3.5mm headphone jack for audio. The V40’s single speaker is just like the G7’s BoomBox system: it’s shockingly loud and full and gets even louder when you place the phone down on a table. The V40 also has the same haptic feedback as the G7, which is the best you can get in the Android world and nearly as good as the Taptic Engine Apple uses in the iPhone. And there’s the dedicated button on the left side for launching the Google Assistant. Personally, I can take or leave this feature, but if the button bothers you, it is possible to disable it (but you can’t remap it to something else, unfortunately).

LG has upgraded the battery capacity in the V40 — it’s a 3,300mAh cell that provides reliable all-day battery life in my use. It’s not as mammoth as the Note 9’s battery, but it lets the V40 last considerably longer than the G7. I’ve been able to get between five and six hours of screen time between charges, which is right up there with what I can typically hit with a phone of this size.

Also improved over the G7 is the performance. Even though the V40 is using the same processor, its software feels better-tuned than the G7’s, and interactions are smoother and faster as a result. The extra bit of RAM also helps keep apps in memory longer.

LG’s software interface is virtually the same as the G7’s, and while it’s not as nice as Google’s Pixel devices, it’s miles ahead of where LG was just a few years ago. It’s also easy to theme, so you can make it look like a Pixel phone with a downloadable theme from the Play Store. The larger problem is LG’s continued sluggishness with software updates: the V40 has the already-outdated Android 8.1 Oreo at launch, and the company won’t commit to a timeline for when it will be updated to the current Android 9 Pie software. This is despite the establishment of a special “Software Upgrade Division” earlier this year.

So with all of that similarity, let’s dive into what actually makes the V40 different: that camera system.

The V40’s rear cameras are comprised of a standard 12-megapixel camera with an f/1.5 optically stabilized lens and a 78-degree field of view. It’s a lower resolution than the G7’s 16-megapixel main camera, but the pixels are 40 percent larger, which combines with the slightly brighter lens for better low light capability.

Finally, there’s the new telephoto camera, which has 12-megapixels of resolution and a 45 degree, f/2.4 lens. Like the telephoto cameras on other phones, this gets you about two times closer to your subject compared to the main camera.

The sum of all of this is that the V40 gives you a more versatile camera than any other smartphone available right now. You can go from taking standard snaps, to ultra-wide vistas, to close up portraits in just a matter of taps on your screen. LG has built in some clever features to its camera app to make the most of the three cameras, as well. Long pressing on the different zoom buttons brings up a live thumbnail of each lens’ field of view, so you can easily see what the other cameras can capture before you take a snap.

There’s even a mode called Triple Shot that will take a picture from all three cameras in just one press of the shutter, so if you’re really indecisive about which camera to use, you can just shoot all three of them.

But not everything is perfect with the V40’s camera, and pixel peepers will likely be let down by a number of things. For starters, because each camera has different specs and lenses, the image quality can vary wildly between them. The main camera produces the best images, followed by the super wide and then the telephoto. The telephoto camera’s smaller sensor and dimmer, non-stabilized lens (the higher an f number, the less light is let in) mean it really doesn’t work well indoors at all.

Compared to the best phone cameras on the market, such as the Pixel 2, iPhone XS, or Note 9, the V40’s standard camera isn’t great. It tends to oversharpen images, giving them a gritty feel, and it oversaturates colors aggressively. It’s not a bad camera at all, but if you put it side by side with the very best, its faults quickly become apparent.

Further, the Triple Shot mode has some annoyances that make it less useful and more of a parlor trick than anything else. Instead of snapping all three cameras at once, it does them in succession, starting with the super wide and ending with the telephoto. That means if your subject moves or you move the camera before it’s done snapping all three shots, you’re going to have either a blurry image or messed-up composition. It also creates a silly animation stitching all three shots together that takes a while to process and isn’t particularly useful. Composing a shot with the Triple Shot feature is very difficult, because it’s hard to predict what the telephoto camera will capture. Finally, the system doesn’t appear to give the telephoto camera enough time to autofocus in Triple Shot mode, so many of the tele shots come out blurry when I use it.

Then there’s the ever-gimmicky portrait style modes that are found on just about every phone now. Like others, the V40 will apply a fake blur to shots to make it look like you’re using a big camera with a fast lens and shallow depth of field. But like every other phone with this feature, it’s not a convincing effect and looks bad most of the time. LG has also aped Apple’s portrait lighting features, which are designed to give you various lighting effects on your photos. They are terrible and look just as bad as Apple’s, especially the ones that are supposed to make your photo look like a studio portrait but instead just look like a cardboard cutout floating in space.

Over on the front of the phone, the standard selfie camera has 8-megapixels and an 80-degree, f/1.9 lens. It’s the same as the camera on the G7 and is fine. Next to it is a new, wide-angle camera that has a 5-megapixel sensor and a 90-degree, f/2.2 lens. It’s only slightly wider than the standard camera, so you might be able to fit one more person in your group selfie using it. The two cameras also enable portrait blur and portrait lighting effects for selfies, but just like the rear cameras, these features are terrible.

Overall, the V40 is an excellent phone, and probably the best one LG has ever made. It won’t appeal to everyone — you have to be a fan of big phones, for starters, and software purists will still be happier with a Pixel — but in a world where smartphones are becoming increasingly similar, the V40 differentiates itself with its unique camera system.

In addition, it has great performance, an excellent screen, and reliable battery life. It simultaneously improves on both the V30 and the G7. Even though the camera system isn’t without fault, it’s still a ton of fun to compose with, and gives me more options than any other phone.

So often, what makes a camera special or useful is how much enjoyment you get out of using it. And the V40’s camera is fun as hell, even if it isn’t perfect.

Apple AirTags review: the good, the bad, and the tiny