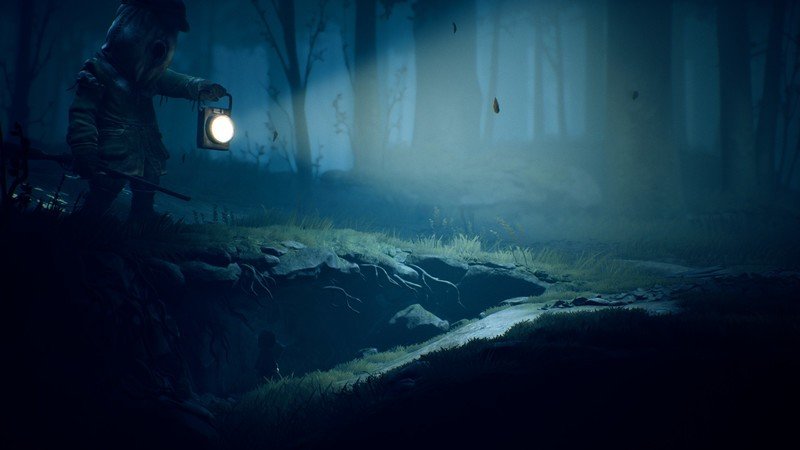 Little Nightmares launched back in 2017 to widespread praise. Although it was perhaps a tad overlooked at launch, it eventually went on to sell over two million copies. Blending puzzle-platformer elements in a treacherous side-scrolling world, Little Nightmares punched far above its weight with impressive visual storytelling, harrowing enemies, and disturbing atmospherics. Tarsier Studios now has millions of fans under its belt, with a ton of YouTube content dedicated to theories for the game’s mysterious storytelling. Little Nightmares II builds on these foundations in a big way, delivering what I firmly believe to be an instant classic, and one of 2021’s first must-play games.

As covered in my Little Nightmares II preview, the game follows the events of the prequel, with its unique brand of side-scrolling 3D platforming, light puzzle solving, visual story-telling, and spine-chilling environment. Little Nightmares II evolves the formula with some light combat mechanics, a wider variety of locations, and an all-new cast of twisted enemies that want nothing more than to murder you, and everyone else in this haunted domain.

Here’s why I think you should highly consider making Little Nightmares II the next game you play.

Little Nightmares II follows the events of the first game, with a similarly subtle story-telling style. There is no dialogue in the game, nor explicit explanations for what is going on in this dark world. Part of the fun of Little Nightmares is trying to decypher exactly what is going on, paying close attention to the game’s detailed hint-laden environments.

Without giving too much away (and you should totally play Little Nightmares before hitting Little Nightmares 2), the original game put you in control of Six, a small child in a somewhat iconic yellow raincoat. Trapped in an underwater dungeon known as The Maw, Little Nightmares was all about escaping the horrific denizens of the depths. Something truly terrible was going on in that place, explained through hints in the game’s setting and the behavior of some of the game’s enemies and characters. Little Nightmares II builds on this formula in a big way, expanding the world’s scope beyond a single location.

Throughout, you’ll guide Six and her new companion, Mono, through the ruins of a nightmarish otherworld. Although the game is single-player, Six will join you as a computer-controller character throughout. The connection between Mono and Six elevates the connection you’ll feel with the story in ways I won’t spoil, but it’s clear Mono is intentioned to protect Six, with the game even giving you the ability to hold her hand by with the right trigger. This serves no gameplay purpose whatsoever (save for an achievement), but its inclusion is evocative and points to the pair’s curious relationship.

Little Nightmares II takes place in the same universe as the first, offering up new details on exactly what happened to this world. You start off in a misty forest, full of traps and corpses. A masked woodsman stalks the trees, chasing Mono with a large shotgun. Mono progresses across a lake to an abandoned city in ruins, where large residential buildings stand bent and destroyed, huge chasms cross-cross through the land, and clothes and shoes litter the ground.

Another segment takes you through an entire school day, from early morning lessons, through to lunch break, to an afternoon science class with dissection trays and specimens. The school is populated with psychotic child-like marionettes, led by a monstrous teacher with a snake-like neck. Later, you’ll play What’s the time, Mister Wolf? with the decapitated remains of undead patients in the dark, armed only with a flashlight, while trying to outrun their grotesque creator.

Every scene is drenched in deliberate mysteries that will drive theorists insane. Deciphering the clues is a big part of the fun, and I just know YouTube theorists are going to have a field day trying to connect the dots between the first and second games. Tarsier is giving you a lot to work with here.

It’s tough to go through the themes without falling into spoiler territory, but the citizens of the unnamed city seem intent on rebuilding what was lost in whatever struggle occurred to make the world the way it is.

Every scene is drenched in deliberate mysteries that will drive theorists insane.

Throughout, the warped citizens of the game seem to be trying to go about their daily business, albeit distorted through a nightmarish lens. The world design is a cracked reflection of our own world, like trying to grasp memories of a dream as it fades. It’s truly inspired, with excellent pacing, broken up with cinematic vistas that give the world a sense of depth. Throughout, Little Nightmares II is accentuated with haunting orchestral overtures that will make the hairs on your neck stand on end.

Little Nightmares II draws to an utterly bewildering conclusion that I shan’t spoil, suffice to say that the way I felt after going through the game’s final scenes had me notch this review up from 4.5 to 5.

I played Little Nightmares 2 on an Xbox Series X, although the game hasn’t been specifically ported to the next-gen systems as of writing. In backward compatibility mode, the game runs at around 30 frames per second with a crisp resolution and impeccable lighting and environmental detail. The game takes place on a 3D plane, but with a side-scrolling fixed camera. This can make depth perception a little quirky at times, but it’s also what gives Little Nightmares its unique feel.

Little Nightmares II is first and foremost a side-scrolling puzzle platformer, but it bends the typical formula with stealth sequences, chase events, and now, light combat mechanics. The combat mechanics gives Tarsier another system for building combat into puzzles, given that timing can be the crucial difference between life and death. It also adds a much-needed layer of depth, since it becomes harder to predict how each segment and scene will play out. Mono is also joined by Six throughout the game, which makes for interesting co-operative puzzle elements, as you both work your way through the game’s winding ruins and dark corridors. Six is controlled entirely by the computer this time around, giving you a boost up to inaccessible areas or helping you push heavier objects.

Although I generally found the puzzle elements to be overly simplistic and straight forward, Little Nightmares II makes up for it in other ways. In addition to the new combat interactions, certain segments have new mechanics specific to that segment. For example, one segment gives Mono a flashlight, which makes for some eyes-wide distressing gameplay, fumbling about with enemies in the dark. Another gives Mono a remote control, which lets him activate television sets to solve other puzzles later on. The new toys help keep the game feeling fresh throughout the 4-6 hour campaign, which is buoyed further with secret hunting. The game is also quite rewarding to play through a second time, given the way the narrative is delivered. Playing through again on a second save, I’m realizing things about the game that I didn’t on the first time around, armed with knowledge from the game’s ending.

What makes Little Nightmares II so very worth it, ultimately, is the parade of ghastly set pieces. Like the original, it doesn’t rely on cheap jump scares to create a haunting atmosphere. Tarsier weaves its puzzles, platforming, and meticulously dynamic enemies into some incredible climactic moments that I suspect will stay with me for a long time.

There are tons of clever moments where Tarsier shatters your illusions of safety, as the game’s warped creatures defy the game’s established rules to come after you. I don’t want to give these moments away, but they were such a thrill to experience that I immediately began playing through for a second time.

Every minute of Little Nightmares II made for an unforgettable experience.

I will say that Little Nightmares II can feel a bit fiddly at times. The game is generous with checkpointing, which means you’re never pulled too far back from progression, but occasionally I felt like I died due to the controls rather than the game. At least a couple of times while playing, Mono got snagged on an object or a wall which led to unnecessary deaths. Sometimes he can feel a bit sluggish while transitioning from crouching to sprinting too, which is sometimes required to avoid hazards. Mono isn’t a super soldier, though, so there’s something to be said about awkward controls adding to the tension.

The fact that it’s so hard to describe how the game plays without running into spoilers is a testament to how well Tariser managed to interweave and intersect the game’s systems into a cohesive whole. You will be smashing ceramic skulls of marionette children with a hammer. You will be chased by a psychotic gravity-defying mortician. You’ll dance in the dark with disembodied torsos. And ultimately, you’ll reach the game’s thrilling climax that still has me feeling overcome with equal parts grief, confusion, and elation. Every minute of Little Nightmares II made for an unforgettable experience.

Should you buy Little Nightmares 2?

Little Nightmares 2 is one of those rare sorts of games that strive to showcase something new. Some of the truly cursed imagery in this game will haunt me for some time.

Little Nightmares II is a rare delicacy of a game.

With meticulous pacing, relentless detailing, smart setpieces, and malefic music, Little Nightmares II is among the first must-play games of 2021. I’d argue that even gamers who aren’t typically fans of horror atmospherics will find a lot to love about Little Nightmares II’s particular brand of Tim Burton-esque gothica, which ditches cheap jump scares for evocative tension and grim majesty.

Save Six and Mono