Mercedes-AMG has unveiled its 2021 Formula 1 car that Lewis Hamilton will use to bid for a record-breaking eighth world championship.

The new machine, called the F1 W12 E Performance, is a development of the squad’s ultra-successful 2020 car. The name now includes the new E Performance tag that Mercedes-AMG will use for all its performance hybrid models.

Mercedes-AMG has also revealed a revised livery. It maintains the black base that was introduced last year to highlight its commitment to improving diversity, although makes greater use of Mercedes’ traditional silver. There is also increased AMG branding, while Ineos – which has taken a part-share in the team – also features prominently.

The squad will retain an unchanged line-up for 2021, with Hamilton and Valtteri Bottas. Hamilton has won six of the last seven titles and will be aiming for a fifth consecutive crown – which would tie the record Michael Schumacher set from 2000-2004. Hamilton and Schumacher are currently tied on seven championships. 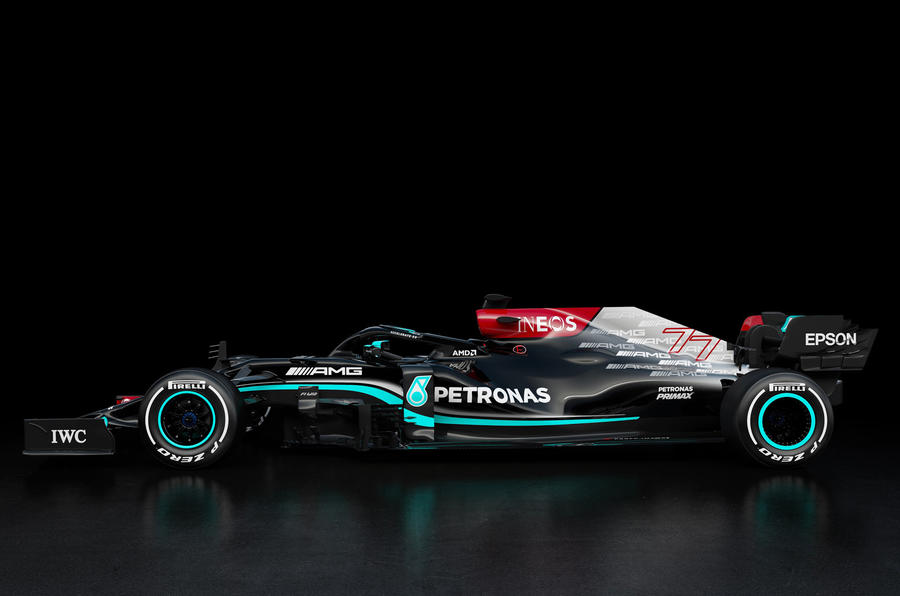 Mercedes has dominated F1 since the current 1.6-litre turbo hybrid engine rules were introduced in 2014, and will be aiming for an eighth consecutive constructors’ championship this year. Team boss Toto Wolff said: “Every year we reset our focus and define the right objectives. That may sound simple but it’s damn hard and is probably why there are no sports teams out there with seven consecutive titles. So many things can happen and it’s very natural to get used to success, and therefore not fight as hard for it.

“But this team has not shown any of that. I see the same fire, hunger and passion now as I did the first time I walked through the doors in 2013.”

F1 bosses froze much development for this season to cut costs in the wake of the Covid-19 pandemic and the introduction of new car regulations in 2022 – but there are new 2021 rules to limit the performance of key aerodynamic areas in a bid to close up the competition.

As a result, Mercedes-AMG says it has introduced a number of aerodynamic changes along with developments to the suspension, cooling system and hybrid power unit.

“What’s carried over will look different from team to team, because the rules didn’t require you to carry over the same things,” said technical boss James Allison. “The rules freeze a large chunk of the car, but then give each team two tokens to spend on changing their car. Along with the tokens comes a shopping list showing how many tokens are required for each change.”

The firm says it has also made changes to the M12 power unit to increase performance and reliability.