Audi‘s Q range of SUVs will continue to expand with the introduction of this; the new Q4. Due to hit showrooms in 2019, with a price-tag of around £30,000, the model will rival the  BMW X4 and Mercedes GLC Coupe, and has been spied on the road for the very first time.

An idea floated in 2014 with the reveal of the TT Offroad Concept at that year’s Beijing Motor Show, the final car will be less jumped off, off-road TT, but a far simpler proposition: a more coupe shaped variant of the latest Q3, and a smaller sibling for the recently launched flagship Q8.

The new Q4 will sit on the same MQB platform as the current Q3, and will benefit from the various technological developments already used across the VW-Group range. The company’s latest 9.2-inch infotainment system and 10.25-inch digital instrument cluster is expected to feature, as is a host of safety technology including active lane assist, adaptive cruise control and blind spot monitoring.

The VW Group’s new 1.5-litre TSI engine will form the base petrol option, and will likely be available in either 128bhp or 148bhp outputs. The company’s 2.0-litre TDI diesels will also feature with power outputs of 148bhp and 187bhp. At the upper end of the range, expect an RS Q4 model using the 395bhp, turbocharged 2.5-litre five-cylinder from the new RS 3. 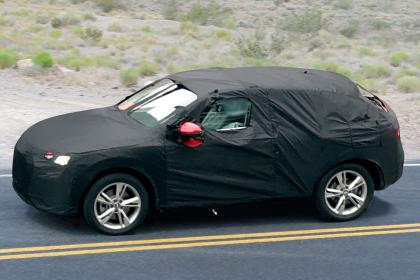 The MQB platform, shared between the Q3 and new Q4, can accommodate plug-in hybrid powertrains. However, as the newest Q3 doesn’t currently offer a PHEV variant, it’s unlikely that the new Q4 will from launch.

Like the Q3, expect a comprehensive list of equipment, with LED headlights, climate control and a leather steering wheel all appearing as standard.

Audi’s new Q4 is set to be unveiled in the second half of 2019, which means a potential debut at the Frankfurt Motor Show. Details are yet to be confirmed, but we’ll update you when they become available.

What do you think of Audi’s plans? Leave us a comment below…