The SEAT Leon is due to be replaced this year, with this fresh batch of spy shots showing the all-new model undergoing testing at the Nurburgring. This latest mule is less heavily camouflaged than its predecessors, sporting less cladding around its bumpers and grille, giving us our best indication yet of the finished model’s styling.

SEAT’s latest Mk4 Leon prototype adopts the brand’s new family face, first seen on the new Tarraco SUV. Its grille is more vertical and positioned lower on the car’s bumper than the outgoing Leon, while its headlights are slimmer and angled more sharply downwards towards the grille’s edges.

Moving rearwards, the outgoing Leon’s smooth shape has been replaced by a more angular design. There’s a more pronounced step between the base of the rear window and the boot lid, while the gap in the cladding across the boot lid of this new mule suggests that the forthcoming Leon, like the Tarraco, will also sport a full-width light bar.

Previous spy shots of the estate-bodied variant, which gave us an undisguised peek at the car’s flanks, showed that the current car’s creases will be largely carried over to the new model. Dr Matthias Rabe, the firm’s board member with responsibility for research and development, told Auto Express last year: “the styling of the car is not a revolution but it’s a big evolution. You will be able to see that it is a Leon; you won’t be able to mistake it for any car in the segment. But that is what we’ve been working on, across our range; now we have a clear, consistent product design identity.”

The fourth-generation Leon will form a key part of a major product offensive from SEAT – the most intensive rollout of new or heavily revised models in the Spanish company’s history. It’s also a key car from an electrification point of view, and a plug-in hybrid variant has been confirmed for release in 2020.

“It’s our biggest push ever.” Said Rabe “We’ve had Ateca, now Arona, the renewal of Ibiza, the facelifted Leon. But it’s only now that we really accelerate; over the next three years we’ll see six or seven new models, and most of them will be totally new.”

The next generation of Leon will continue to be based on the VW Group’s MQB platform technology – the same chassis parts that underpin the current car as well as the Skoda Octavia and VW Golf. However, we can expect SEAT to stretch the Leon’s wheelbase by a few millimetres in a bid to boost rear cabin space. Three-door variants will be dropped, with only five-door models and ST estates making showrooms.

The engine line-up will stay familiar, too, with 1.0 and 1.5-litre petrols, and a 1.6-litre diesel. It is also likely to get at least some of the electronics architecture from the forthcoming Mk8 Golf – allowing the potential for a 48V-based mild hybrid, although this may arrive later in the car’s life. The plug-in arriving 2020 will be able to travel 31 miles on electric power only.

SEAT EVs on the way

Alongside the Leon PHEV, SEAT has confirmed that a bespoke, all-electric vehicle will arrive in 2020, which is likely to take on the SEAT Born name when it arrives.

Speaking to Auto Express in 2017, SEAT head of design Alejandro Mesonero admitted that the vehicle had been signed off. Mesonero directly compared it with the Leon – a further hint that the two cars have a similar bodystyle. 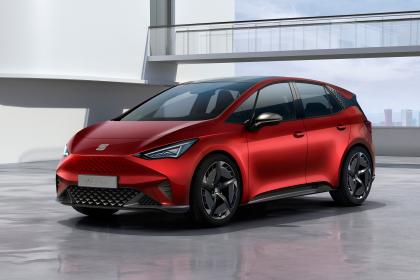 “The process for the MEB car was actually quite quick,” Mesonero said. “It is clear to see it is a SEAT. I’ve been enjoying looking at the MEB car sitting beside the next Leon in the studio, in fact. The EV sits a bit taller, because of the battery location [in the floor], and it’s different from it because of the packaging.”

SEAT also has ambitious plans for its recently spun-off Cupra brand – starting with the new hot Ateca. And as Auto Express revealed back in August, the firm is considering badging its high-performance models as Cupras in their own right. Rabe declined to comment on this speculation, but he said: “It’s clear that Cupra is not just limited to Leon. There are lots of people in our organisation supporting it.”

What do you think of our exclusive images of the next SEAT Leon? Let us know in the comments section below…