Preregistration has opened in West

Preregistration has opened for the game in the West. There will be a closed beta test for Android devices “soon.” 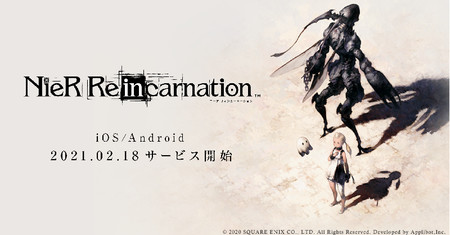 The “command action RPG” launched for iOS and Android devices in Japan on February 18.

Square Enix revealed on December 11 that the game was delayed from a general 2020 release to a release in the first half of 2021.

The role-playing game for iOS and Android devices is free to play, with optional in-game items available for purchase. Square Enix is producing the game, Applibot is developing the game, and CyDesignation is designing the characters. The game will get a release in North America and Europe.

The now-defunct Japanese game developer Cavia (Drakengard, Resident Evil: The Darkside Chronicles) developed the original NieR game as a spinoff of the Drakengard series in 2010. Square Enix released versions of the game for two different consoles: NieR Gestalt for the Xbox 360, and NieR Replicant for the PlayStation 3. NieR Replicant featured a different character design for the protagonist, and minor differences in the plot. NieR was the last game Cavia developed before being disbanded and absorbed into AQ Interactive Inc. in July 2010.

NieR Replicant ver.1.22474487139…, a remastered edition of NieR Replicant, launched for the PlayStation 4, Xbox One, and PC via Steam on April 22 in Japan and April 23 outside of Japan.

The NieR:Automata sequel shipped for the PS4 in Japan in February 2017, followed by North America and Europe in March 2017. Square Enix also released the game on PC via Steam in March 2017, and on Xbox One in June 2018. The game has a combined shipments and digital download sales number of 4.5 million.