The Planning Commission said at its Feb. 9 meeting that the city should allow Chalmers Avenue between East Third and East Fourth streets to become a car-free zone, with pedestrian and bike paths and green space replacing the asphalt. The proposed “urban park of sorts” is part of the Pathways at Chalmers Court public housing redevelopment.

“The improved right of way will provide a paved bike path to extend safe access to the Lance Armstrong Bikeway at Fifth Street,” said the project’s architect, Phil Crisara of Nelsen Partners. “The landscaped right of way will also provide a beautiful, shaded walk for pedestrians and joggers.” A mixed-use project north of the site provided a similar path along what was once Chalmers Avenue right of way.

The applicant also said the right-of-way vacation would provide more car-free play area for children and decrease the number of street crossings on the way to Zavala Elementary. A filing with the city mentioned that the space would “expand the city’s green infrastructure network, increase the city’s urban forest (and) improve the city’s water quality by reducing impervious cover.”

Crisara said the new space would also benefit the community at large. “The urban park of sorts, by design, invites the public to visit, enjoy some shade, and walk and bike to their East Austin destinations,” he said.

The old Chalmers Court apartments, built in 1939, are run-down, lack air conditioning and violate ADA standards. The image below shows the redevelopment plans, which include 398 new income-restricted units that are being built in phases. The south portion of the project is complete; the east part is under construction; the west section is moving through the permitting process. 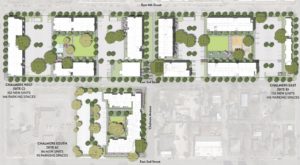 The commission’s discussion centered on how the car-free zone through the new buildings would impact connectivity in the neighborhood.

“The block is gonna end up being something like 1,600 feet – just a huge length of a block,” Commissioner Jeffrey Thompson said. Such a long block would inconvenience drivers, he worried, and increase their trip length – an undesirable outcome not only for motorists but for the environment. “We are making a less-connected city by digging up roads and putting in sidewalks.”

Others, like Commissioner Patricia Seeger, thought the plan made sense. “It seems reasonable that if we’re looking at a compact reworking of the Chalmers Courts that we provide more pedestrian-friendly access rather than vehicular access.”

Commissioner James Shieh suggested a middle ground: Provide a street that prioritizes pedestrians and cyclists but allows cars, albeit at a very slow speed.

Commissioner Claire Hempel remarked that “the design is welcoming, and it doesn’t feel like it’s a private development.”

The commission voted 7-3-1 to recommend the plan to City Council.

The Austin Monitor’s work is made possible by donations from the community. Though our reporting covers donors from time to time, we are careful to keep business and editorial efforts separate while maintaining transparency. A complete list of donors is available here, and our code of ethics is explained here.