The number of pothole-related breakdowns attended by the RAC increased 20 per cent in the final three months of 2019 compared with the same period in 2018.

RAC patrols attended more than 2,000 breakdowns in October, November and December last year where pothole-related faults such as distorted wheels, broken suspension springs and damaged shock absorbers were a contributing factor. This is around 300 more than in Q4 2018.

• Pothole claims: How to claim for pothole damage to your car

In spite of the winter increase, the number of breakdowns attended where potholes were a contributing factor throughout the entire year reduced from 13,000 in 2018 to 9,200 in 2019. However, the RAC claims 2018’s inflated figure was due to the ‘Beast from the East’ cold wave, which hit the UK in February of that year. 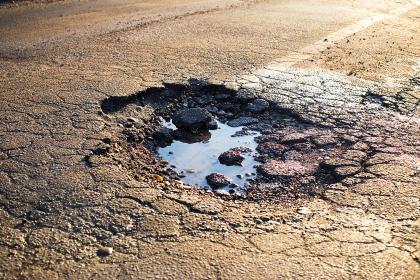 The 9,200 pothole-related breakdowns in 2019 represented 1.1 per cent of all breakdowns attended by the RAC last year, and 0.9 per cent of those between October and December – up from 0.8 per cent in the same period in 2018.

Nicholas Lyes, head of roads policy at the RAC, said: “What we need is for central Government to think differently about how councils are funded to maintain the roads under their control. Short-term commitments of cash, while welcome, are not enough on their own – councils need the security of long-term funding so they can plan proper preventative road maintenance.

“A solution to the UK’s long-term pothole problem is possible. From this year, the money raised from vehicle excise duty in England will be ring-fenced to help fund motorways and major A-roads over successive five-year periods. But as yet, there is no similar model for local roads where the vast majority of drivers begin and end their journeys. We believe this could easily be changed by ring-fencing 2p a litre from existing fuel duty revenue to generate £4.7bn of additional funding over five years.”

What do you think about the state of UK roads? Let us know in the comments…