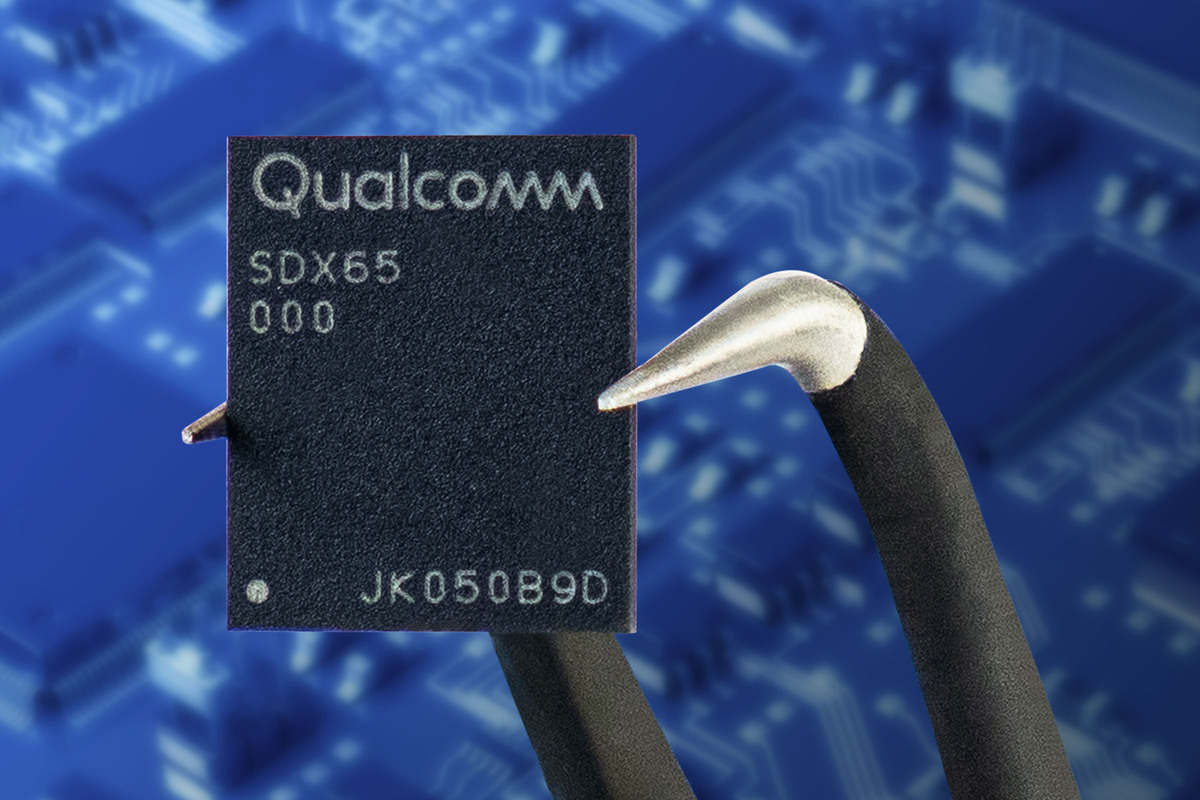 Qualcomm has just announced what it claims is the first 10 gigabit 5G modem, the Snapdragon X65. Or more accurately, “Modem-RF System,” as it includes the modem, RF transceivers, RF front-end, antenna module…it’s a matched set.

If you’re excited about the prospect of this sort of speed in Apple’s fall iPhone release (iPhone 12S? iPhone 13?), don’t hold your breath. It’s likely headed to next year’s iPhone, due to be released in the fall of 2022. When it arrives, you can expect better peak performance and a host of other benefits, but some of it will require carriers to upgrade their networks.

Qualcomm lists a host of improvements in its new modem. As usual, you should take any manufacturer’s claims of performance with a grain of salt.

The Snapdragon X65 is the first design to support 3GPP Release 16. The 3GPP is a group of standards organizations that govern mobile communications, to make sure devices from different manufacturers are compatible. Release 15 was “5G phase 1” and Release 16 is “5G phase 2.” It’s a large number of enhancements to the speed, reliability, and additional features like 5G satellite access, NR-based access to unlicensed spectrum, and additional enhancements to the V2X (vehicle-to-everything) system.

This is Qualcomm’s fourth-generation system with yet another new mmWave antenna, supporting higher transmit power and all the global mmWave frequencies. New this year is an AI antenna tuning system, which will better-detect things like how you’re gripping your phone to prioritize which antennas are in use, for better reliability.

There are a host of power-saving technologies, and improved spectrum aggregation which should help carriers make more efficient use of the spectrum they have.

The headline feature is 10 gigabit speed, but remember that this is peak throughput of the chipset under ideal circumstances. You’ll never get anything close to that out in the real world. Especially not if you aren’t on one of the few areas covered by mmWave access. For more about 5G and its different frequencies and technologies, check out our 5G FAQ.

Not to mention, this is all Qualcomm’s marketing hype. Many of these improvements may not be apparent when the modem is used in a future iPhone, and many of them will require infrastructure improvements from 5G carriers.

Not coming to iPhone this year

Qualcomm announces new modems months before they’re available to phone makers for integration and testing, which is a process that itself can take many months. In other words, the Snapdragon X65 won’t be ready in time for the iPhone 13 (or whatever Apple calls it) in the fall of 2021.

Some Android phone makers might hurry along their first phones with the X65 by the end of the year, but Apple starts earlier, tests longer, and has a big run-up for production because it sells tens of millions of phones per quarter.

The iPhone 12 uses Qualcomm’s X55 modem, and this year’s iPhone is almost certainly going to use the X60 modem, which should offer better performance and power efficiency.

Two years ago, Apple settled a huge, multi-year legal fight with Qualcomm. Apple had been working on its own modem technology for years, but was apparently unable to get it working to its satisfaction, despite buying out Intel’s modem business. As part of the settlement, Apple agreed to license Qualcomm patents for six years with an option for a two-year extension.

Apple also agreed to a “multi-year” chipset licensing business. That’s the part that would cover Apple actually using Qualcomm modems in its iPhones and iPads (and perhaps eventually MacBooks or even things like VR or AR glasses). The public was never really told how long “multi-year” is, so it’s possible that Apple can move to using its own modems at any time.

This would be a switch from Apple buying actual modems and related chips from Qualcomm and instead making its own, licensing the necessary Qualcomm patents instead. There has been no rumor or mention of Apple approaching this point, but we’re not really likely to hear a lot about this internal development until it’s nearly ready to appear in an iPhone.

In other words, our assumption that Apple will still be buying Qualcomm modems for the 2022 iPhone is just that—an assumption. Apple is keen to move to using its own modems, but building world-class 5G modem and antenna technology is an enormously difficult problem, and the company surely needs plenty of time.