We accept a handful of things as universally certain: Death, taxes, and Apple’s smartphone chipsets beat what you can get in an Android phone. But Qualcomm’s just-announced $1.4 billion acquisition of NUVIA could turn that last detail around. The two-year-old company was helmed by a handful of former Apple chipset designer hotshots with grand promises of power savings and performance improvements, and those skills could spell drastic improvements in future Android phones.

For a bit of context, NUVIA was founded just back in 2019. Analyst James Sanders at 451 Research (part of S&P Global Market Intelligence) tells us the trio helming the company have collectively traced a path through all the most important chipset companies, from Intel to AMD/ATI, ARM, and Broadcom. Very notably, their tenure overlapped at Apple, where they played a part in designing the high-performance A-series chips used in iPhones and iPads.

One need only look at benchmarks that compare between Apple and Android devices to see the common and slightly sad refrain: Apple’s chips consistently beat what we can get in Android phones (outside a handful of cherry-picked or sustained tests). And that’s not just true when it comes to performance; it’s also the case when it comes to efficiency, which impacts battery life. But this acquisition of NUVIA could change things, bringing part of the brain trust behind Apple’s amazing A-series chips to Qualcomm. Of course, the best thing about Apple’s chips is how well they work paired with Apple’s software and that combined vertical approach, but NUVIA’s tech could still come in handy. 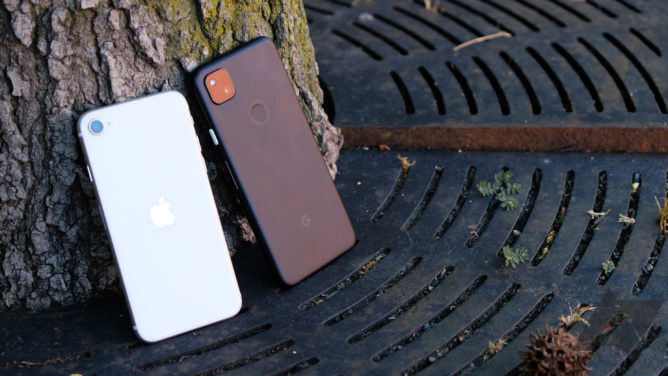 Even Apple’s $400 iPhone SE has a chip that spanks most Android phones.

Now, there is one more potential hiccup worth noting: NUVIA was primarily focused on designing custom CPUs for the server/data center space, so they haven’t exactly been working on smartphone hardware for the last two years. But much of the same logic could still apply, and these folks still have lots of experience with the subject — NUVIA has also been poaching from Samsung’s shuttered Texas Exynos division, giving it a talent pool familiar with the Android side of the equation and plenty of recent smartphone experience.

Qualcomm seems to think that NUVIA’s technology and expertise can have an impact on Snapdragon chips, specifically stating that it plans on integrating NUVIA’s CPUs into smartphones as part of today’s announcement. Sanders agrees: “While it’s likely that Qualcomm will utilize NUVIA to fulfill the same role of Qualcomm Datacenter Technologies, which is widely seen as a casualty of politics around their failed acquisition of NXP, there are broader implications for smartphone-class SoCs.” Even if Apple enjoys potentially better benefits by controlling both software and hardware, this can still make a difference. “Qualcomm could, with robust commitments to longitudinal software support for its customers, utilize NUVIA’s design principles to successes not just in datacenters, but also in power- and performance-conscious settings such as Android smartphones and Chromebooks.”

Although the company doesn’t talk about the subject very much and it’s difficult to confirm, It’s rumored that Qualcomm’s “custom” cores haven’t actually been that customized for the last few generations — at least, not compared to some of its prior chipsets or designs from companies like Apple. But this acquisition of NUVIA could signify a substantial shift in the company’s chipset design strategy, delivering a higher-performance experience in future Qualcomm chipsets and, therefore, future Android phones. And with ARM starting to take off in the computer market now as well courtesy of Apple’s incredible M1, Qualcomm’s acquisition of NUVIA puts them in a very good position to take advantage of that shift, too. But we’re the Android Police, so it’s the impact on future Android phones that has us most excited.