Samsung Galaxy Fold, the company’s first foldable Android smartphone in the Indian market, has finally gone official in the country. Of course the USP of newly-launched Samsung phone is the foldable display that allows users to transform it into a tablet-like device. The key highlights on the Galaxy Fold include a total of six cameras, two displays, octa-core SoC and 512GB of onboard storage.

Samsung Galaxy Fold features two displays – with one flat screen featuring at the front and the second internal screen that sports a foldable design. While the front display has a 4.6-inch Super AMOLED panel with an HD+ (840×1960 pixels) resolutions and 21:9 aspect ratio, the foldable display includes a 7.3-inch Infinity Flex Dynamic AMOLED panel that has a QXGA+ (1536×2152 pixels) resolution with 4.2:3 aspect ratio.

Samsung Galaxy Fold runs Android 9 Pie with a tweaked One UI skin on top. The phone is powered by an octa-core SoC, paired with 12GB of RAM. It also comes with a 512GB of internal storage. Note that the storage is not expandable.

On the imaging front, Samsung Galaxy Fold comes equipped with a triple rear camera setup, two cameras at the front, and a single selfie shooter on the cover. Interesting. Isn’t it?

It packs a dual battery that has a capacity of 4,380mAh and supports wired as well as wireless charging. Also, there is a Wireless PowerShare feature that enables reverse charging. The device measures 62.8×160.9×17.1 mm when folded and 117.9×160.9×7.6 mm when unfolded along with 276 grams of weight.

The price for the lone 12GB RAM + 512GB storage variant of Samsung Galaxy Fold in India has been set at Rs 1,64,999. The phone comes in Cosmos Black colour option. Samsung will start taking pre-bookings for the Galaxy Fold in India from October 4, while its shipments will begin from October 20. The pre-bookings will take place online through the Samsung eShop and offline in 35 cities across select 315 outlets, including the Samsung Opera House in Bengaluru. 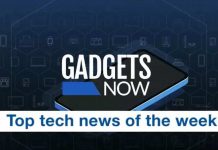 Samsung working on an affordable smartphone with removable battery

How to record any video chat conversation on your smartphone