For 2019 Samsung has revamped its QLED range and there are quite a few improvements and upgrades which make the new TVs better than their 2018 counterparts. Here we’re testing the Q70R which is available in 49, 55, 65, 75 and 82in models. We tested the 55, but the review applies to other models in the range as well.

One of the big changes is that most of the 2019 models have a direct backlight rather than using edge lighting. This offers better control over local contrast for better HDR.

There’s also an updated Smart Hub which brings even more content – including Apple TV – into the mix, and you can control it via the built-in Bixby assistant or, if you prefer, you can integrate Alexa or Google Assistant if you have an Echo or Google Home device to make it all work.

There’s a mic built into the display itself, but you’ll probably want to disable this to avoid Bixby popping up in the middle of a gaming session. It’s arguably more convenient to use the push-to-talk mic on the OneRemote.

It’s not all upgrades, though. Where the equivalent models from 2018 (Q7FN) and 2017 (Q7F) had the separate One Connect box, the Q70R does not, and so isn’t as well suited to wall mounting. Plus, the 1500-nits brightness has dropped to 1000 for the Q70R. But it is also cheaper than in previous years to compensate.

Until 2 July 2019, there’s up to £500 cashback for UK buyers, which makes the prices more palatable, and Samsung offers a five-year warranty for buying direct. Warranty is just one year for US buyers, and there’s only $100 off the RRP.

For alternatives, see our roundup of the best TVs chart.

The Q70R is a good-looking TV. It has very thin bezels and simple black feet. It doesn’t compete with the Q90R for finish as there’s a lot of plastic used, but for the price, it’s more than acceptable. As it’s an LCD TV, it lacks the wow-factor of super-thin OLED sets and the 62mm depth and 18.5kg weight are two more reasons it’s not the greatest for wall mounting.

We’d prefer a central stand as the Q90R has instead of the wide-apart feet because it means you need a TV bench that’s almost as wide as the TV in order to support it.

Setup is very easy, though: the feet slot into holes in the bottom of the set and don’t require any screws.

The SmartThings app makes the software setup easy too, although you can use the OneRemote – one of the two bundled controllers – to connect to Wi-Fi, set your location and other bits and pieces. 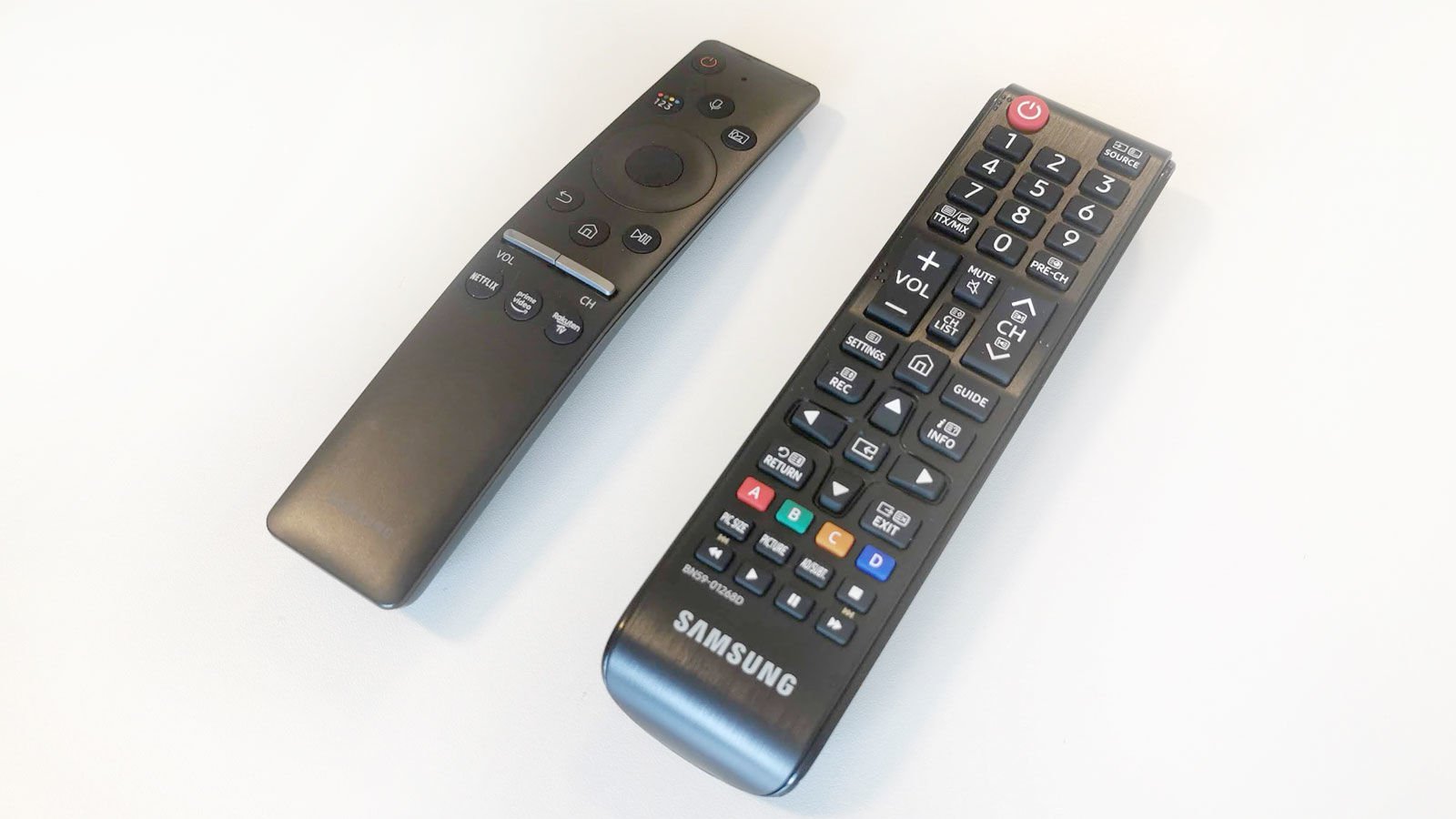 As mentioned, you don’t get the nifty One Connect box that houses all the inputs and outputs and powers the TV with a near-invisible cable. Instead all the ports are on the rear, facing the right-hand edge of the set.

There are three USB ports, one of which is designed to support a hard drive for recording, and a complement of four HDMI 2.0b ports. Samsung didn’t go for version 2.1 as found on the 8K QLED sets, but it says 2.0b is still fine for 4K at up to 120Hz.

One of the HDMIs supports ARC and eARC should be supported in an upcoming firmware update. 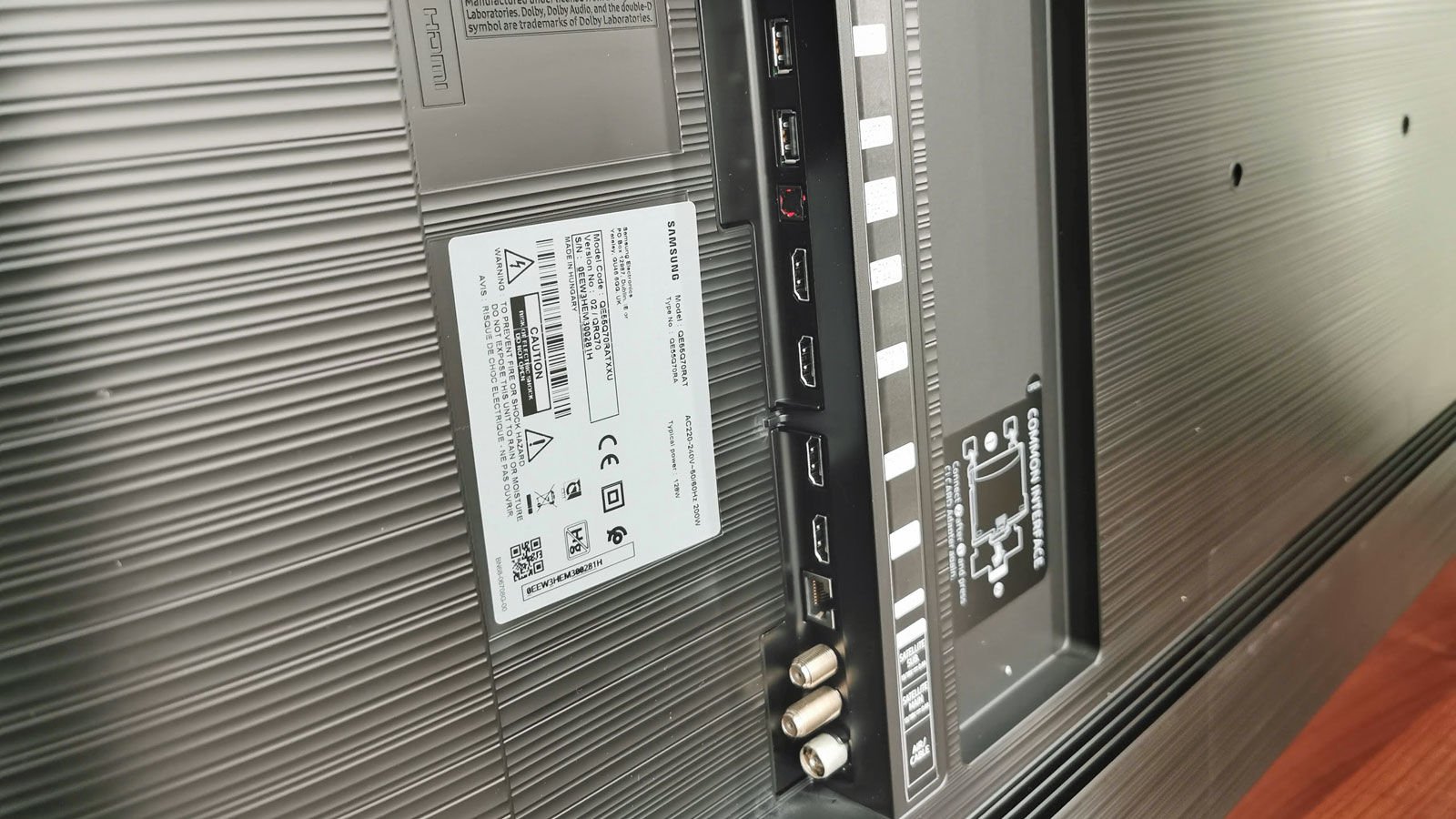 As you’d expect, there’s support for HDR10+ since Samsung created the standard. Some may be put off by the fact it won’t display Dolby Vision content, but it can at least pass Dolby Atmos sound to a compatible soundbar or receiver.

The good news is that you do get Samsung’s Quantum 4K processor which does a great job of upscaling lower-resolution content to 4K.

The Tizen-based interface looks the same as in previous models, and is responsive and easy to use. There’s a wealth of content available: the more basic remote control has buttons for direct access to Netflix, Amazon Prime Video and Rakuten TV. 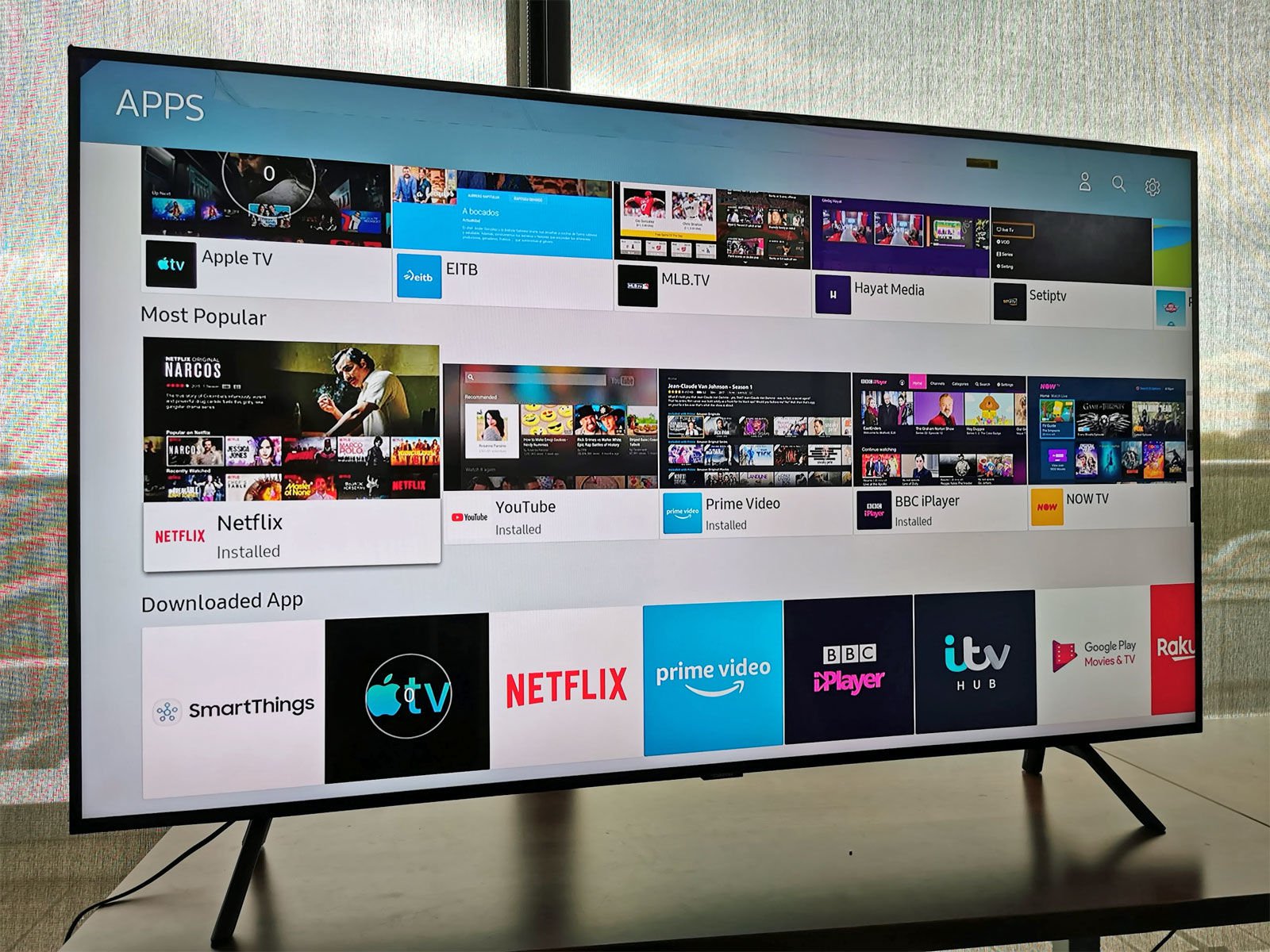 With so much on offer, it’s handy that there’s a Universal guide which gives you results from all these apps and services. It will even learn what you like and serve up suggestions in the For you section, but this will be based on everyone who uses the TV as there are no separate user profiles.

If the Apple TV app sounds up your street, then there’s more good news: the Q70R – like the whole 2019 QLED lineup – has AirPlay 2 so you can beam music, photos and videos directly to your TV from your iPhone or iPad. 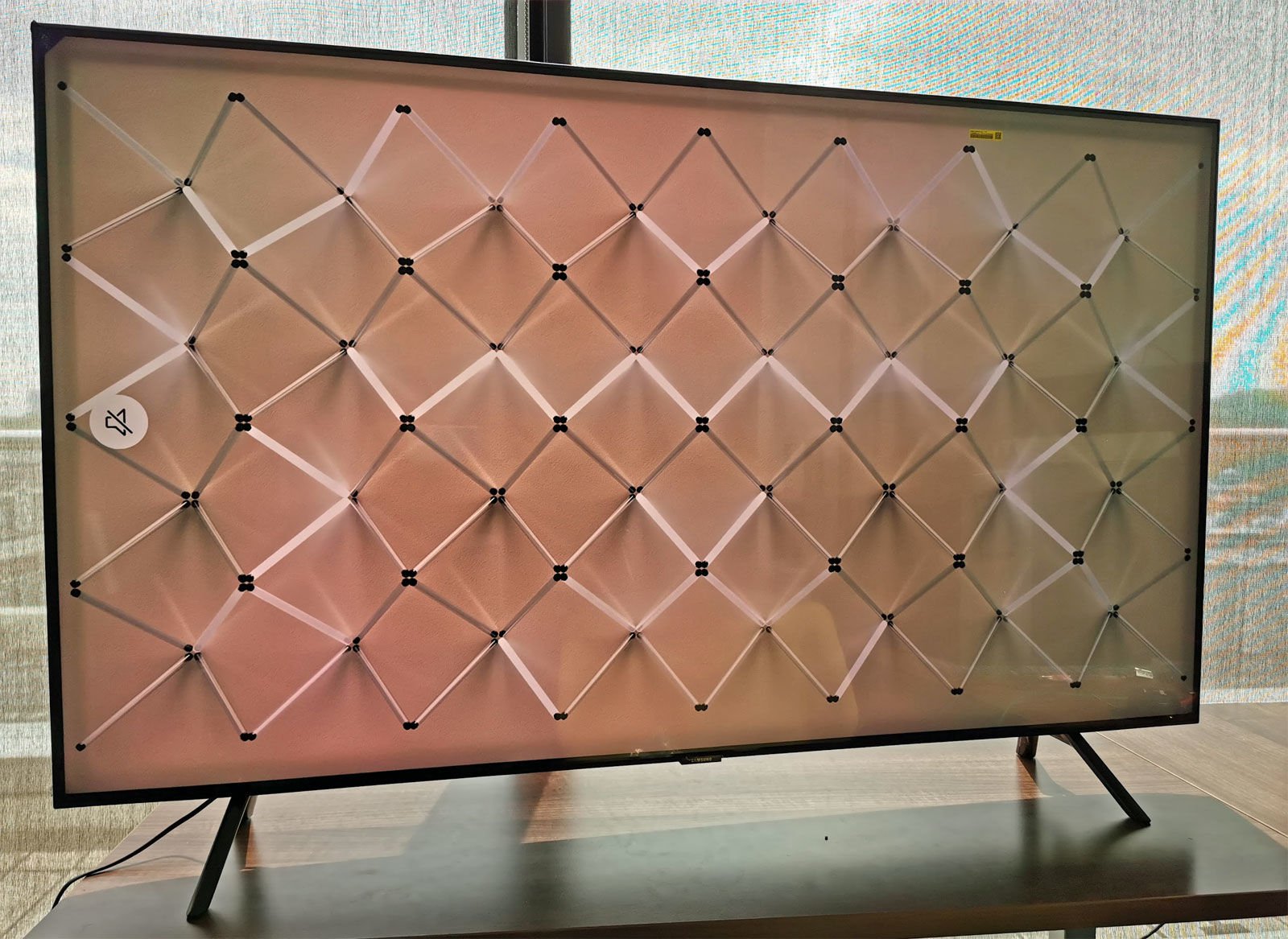 We’re fans of Samsung’s Ambient mode which seeks to make what would otherwise be a large black mirror a useful or decorative display when you’re not watching anything. You can choose and tailor how the mode works, so it could display art, photos, news headlines, weather, or even use a photo of the wall behind to blend in with the room.

This all happens at a low brightness level, using minimal power. On average, when watching TV, the 55in Q70R uses less than 130W.

Although the Q70R doesn’t have the new ultra-wide viewing angle tech found in higher models, we found colours from the VA panel were still acceptable off-axis. You’re best off sitting square-on to the screen so you see the true colours, but it’s a relatively minor compromise given how much less this set costs than the Q90R.

And the direct backlight with local dimming helps to offset the lower peak brightness compared to the Q7FN. Make no mistake, 1000 nits is nice and bright and your initial impression of the Q70R (unless you’re coming from a Q9, say, which is unlikely) will be that colours and brightness are excellent.

If this will be your first QLED TV, the overriding factor is how much saturation colours retain even at the highest brightness. They’re punchy without losing accuracy.

Things step up a level when you’re watching 4K content, and again if that content has HDR metadata that the Q70R can process. It’s here that the local dimming is really effective: blacks are deep and bright areas shine. We did see a little blooming in tougher-to-process scenes, but on the whole the panel and processor did an admirable job of all our test content.

We talked earlier about the Quantum 4K processor, but it’s worth pointing out that no matter how effective it is, you won’t be fooled into thinking you’re watching a 4K stream from iPlayer rather than HD.

If you’re planning to hook up a 4K games console, then you’ll be very happy to know that the response time is under 15ms in the Real Game Enhancer mode, which also uses AI to optimise black levels and audio. For PC gamers with AMD graphics card, the addition of FreeSync is a boon, too.

And, on that subject, the Q70R sounds good for a modern TV. The extra depth over the thinnest models certainly helps here, but so does the intelligent processing which adjusts audio – if you let it – to optimise it for your room. 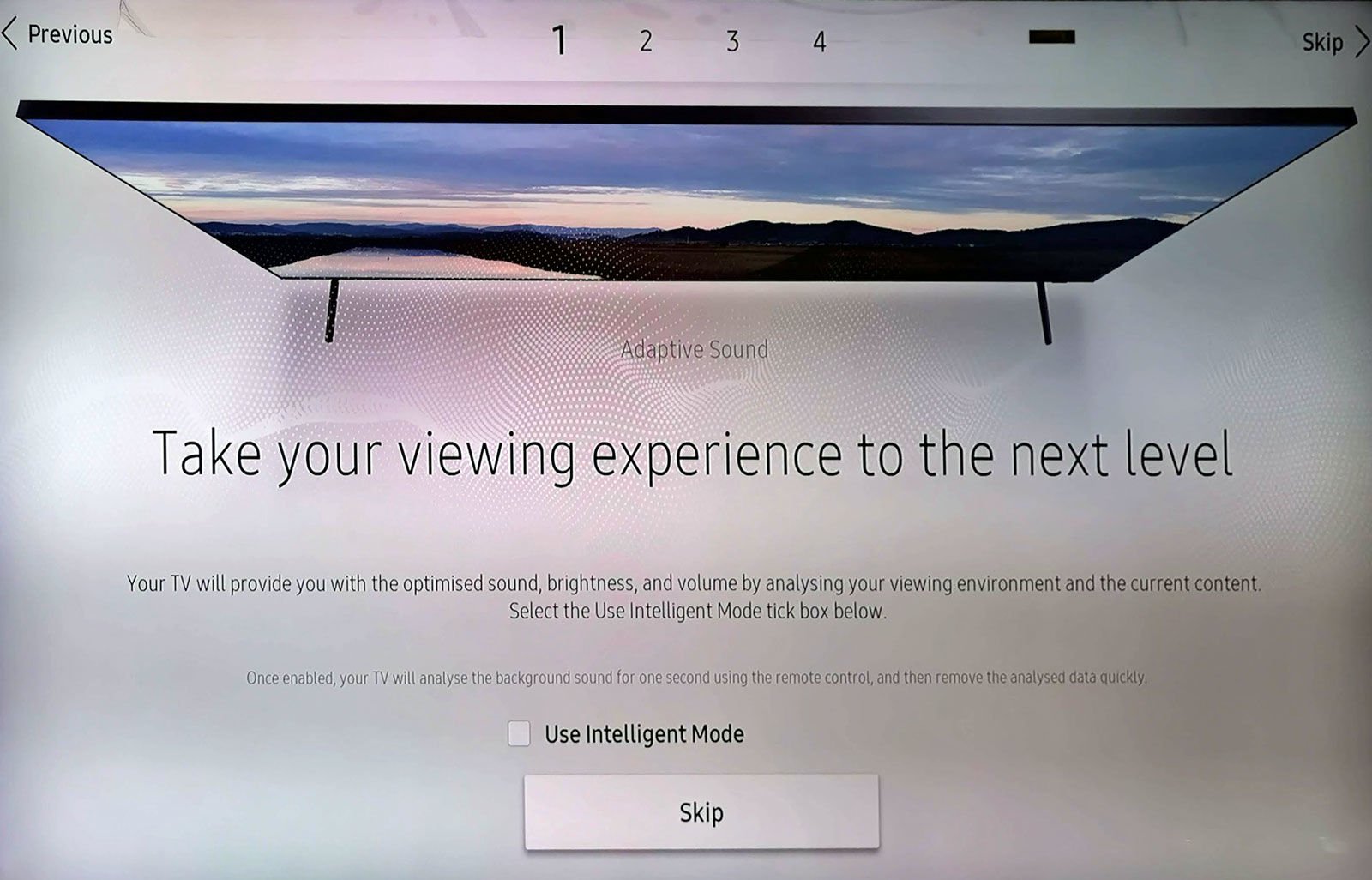 We found voices were clear and music sounded good. There’s even a modicum of bass, but you’ll still want a soundbar or your own hi-fi if you want really good sound to match the picture quality.

With the Q70R Samsung has given with one hand while taking away with the other. It has a direct backlight like the flagship model, instead of edge-lit as you got in 2018.

But the Q70R has half the peak brightness of the Q90R which means HDR simply isn’t as impactful. And you don’t get the handy One Connect box which keeps things tidy when you wall mount the display.

Search around and you’ll easily find great deals on 2018 and even 2017 models, such as the Q7FN, but remember that you will miss out on local dimming and bonuses such as AirPlay 2, FreeSync so it’s swings and roundabouts.

Ultimately, though, the Q70R is a great TV. It offers impressive image quality which is in line with its price. There are also nice extras such as AirPlay 2, and a wealth of content through the smart platform, so you don’t need a bunch of separate dongles or set-top boxes to access your favourite services.

New 10.8-inch iPad, 8.5-inch iPad mini reportedly on the way within a year

How to Use a Wear OS Smartwatch With an iPhone

How Prosstradamus can come back from ‘iPhoneOS’ error

How to Watch Premier League on Twitch: Crystal Palace vs Burnley