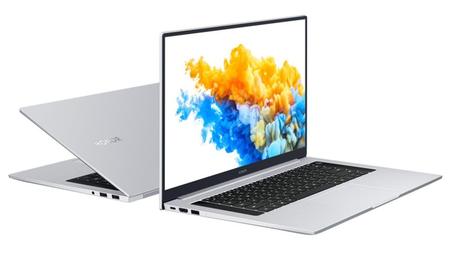 Laptop deals are available almost all year round, but every now and then a great offer comes around that makes you really sit up and notice. That’s just the case right now, with Honor already offering a great bundle on the new Intel version of its flagship MagicBook Pro laptop.

In addition to the device itself, you also get the Honor Router 3, Honor Band 5 fitness tracker, backpack and Bluetooth mouse, all for just £749.99. That’s an incredible saving of £379.96 over the usual price of buying them separately. If that’s not enough, entering the code ‘APCINTEL70‘ at checkout will get you a further £10 saving on total price.
Get this MagicBook Pro bundle from the Honor website now.

This deal is all the more impressive when you consider that this Intel version of the MagicBook Pro was only announced at CES this January. It comes with a 10th-gen Core i5-10210U processor, 16GB of RAM and a 512GB SSD, as well as Nvidia’s GeForce MX350 discrete GPU. The latter is something you won’t find on the AMD model we reviewed last year. What you do still get is a large 16.1in Full HD display, generous port selection and an extremely slim design.

The MagicBook Pro itself is down to £749.99 from the usual £949.99 asking price, but the big attraction of this deal is the free extras thrown in at no extra cost. The Honor Router 3 is an impressive router offering solid speeds, and usually retails at £79.99. The Band 5 fitness tracker is a great introduction into the world of wearables, while the Bluetooth mouse. Both would usually cost you £29.99 on their own, while a premium backpack (usually £39.99) provides plenty of space to hold all your new gear.

Get this MagicBook Pro bundle from the Honor website now.

Interested in hardware from other brands? Check out more of the best laptop deals right now.