A WEALTHY Sheikh has created the Frankenstein of motors, taking parts from a number of vehicles to build this 10-wheeled beast.

Known as the “Dhabiyan”, the giant truck was built using sections of a Jeep Wrangler, Dodge Dart and the rig of an Oshkosh M1075 military truck.

According to his Instagram account, he purchased the former US military transporter before stripping it back and adding the Wrangler on top as the driver compartment.

Dubbed the “largest SUV in the world”, it also uses the rear bumper of a Dodge Dart saloon and even headlights from Ford.

It stands an incredible 3.2metres tall, is 10.8metres long and 2.5metres wide – meaning parking would be a total nightmare.

The Dhabiyan weighs in at around 24 tonnes, largely thanks to its tough military frame.

And a vehicle that size needs an engine just as enormous.

DIAMONDS IN THE ROUGH

LOOK TO THE FUTURE

KEEPING UP WITH THE CAR DASH ICONS

What do the warning symbols on your car dashboard mean?

According to reports, the truck is currently being kept off-road in a history museum in Sharjah, United Arab Emirates.

Along with a host of supercars, off-roaders and classic models, he also has other hybrid creations and even a monster truck. 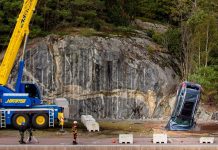 Why Volvo is dropping cars from a crane

The future of public transportation is on the line in Massachusetts