At CES 2020, Sony — yeah, Sony — showed off a car. Wild times. Although CES 2021 didn’t provide us with another automotive venture from Japanese company, the firm did release new video of its Vision-S electric car testing in Austria, on public roads. It’s a big step for the company, although Sony maintains it’s not itching to build cars. If nothing else, the video provides a great test for the company’s new Airpeak drone, which used to capture the aerial footage.

Sony instead said the Vision-S public tests are to validate safety systems it developed for the car. After all, the Vision-S was meant to be a rolling showcase of the company’s sensors and imaging technologies, plus infotainment tech planned for the auto industry. In the new video, we can see the multipanel display front and center for driver information, infotainment and more. The fact it all works is impressive considering the car isn’t meant for production. That didn’t stop Sony from working with Magna Steyr last year to put the car on the streets of Austria for a first time, though.

Climb in the driver’s seat

Subscribe to Roadshow’s newsletter for the latest car news and reviews, delivered to your inbox twice weekly.

Assuming Sony doesn’t change course and decide to build the car, Vision-S will continue to roll along and test the company’s technologies. Last year, the tech firm said the car features Level 2 partially automated technology with its 33 sensors fixed. The level of autonomy will grow, according to Sony, so we’ll maybe have to wait for another CES to see what’s to come from Vision-S. 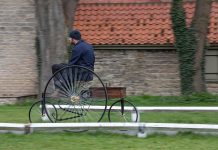 Back to the future: Driving the first ever rechargeable EV