HARRODSBURG, Ky. (WKYT) A teenager is facing charges in Harrodsburg after police say he stole a car from Lexington and crashed it into a Save-A-Lot in Mercer County. 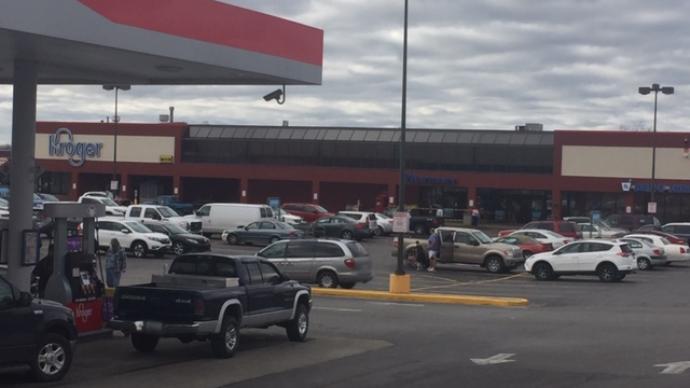 Harrodsburg police found damage to the front of the Save-A-Lot and Kroger. (WKYT)

Harrodsburg police were called to the store just before 3 a.m. Thursday for an alarm drop.

Police found the front of the Save-A-Lot damaged.

Police say the teen also crashed the car into a plastic storage cabinet at the Kroger gas station and stopped there.

Police found the teen inside the Save-A-Lot, and he ran from them before giving himself up.

“He didn’t really have a plan. He was just going with what he felt like doing and ended up in Harrodsburg,” said Harrodsburg Police Officer Akio Tonge.

Police say during that ride, a 9-year-old girl was in the back seat of the car.

“It was an easy grab, and he just took it and took off with it, not knowing it was a nine-year-old in the backseat,” said Officer Tonge.

Officers say she was asleep when the car was stolen and didn’t wake up until the teen started hitting buildings.

“How he was driving that vehicle with that juvenile in the backseat like I said it’s nothing short of a miracle that nobody was seriously, seriously hurt,” said Officer Tonge.

Investigators say it’s a reminder never to leave a car running unless you’re in it.

The girl is safe at home with her family.

Lexington police say the teen could face a kidnapping charge in Fayette County.