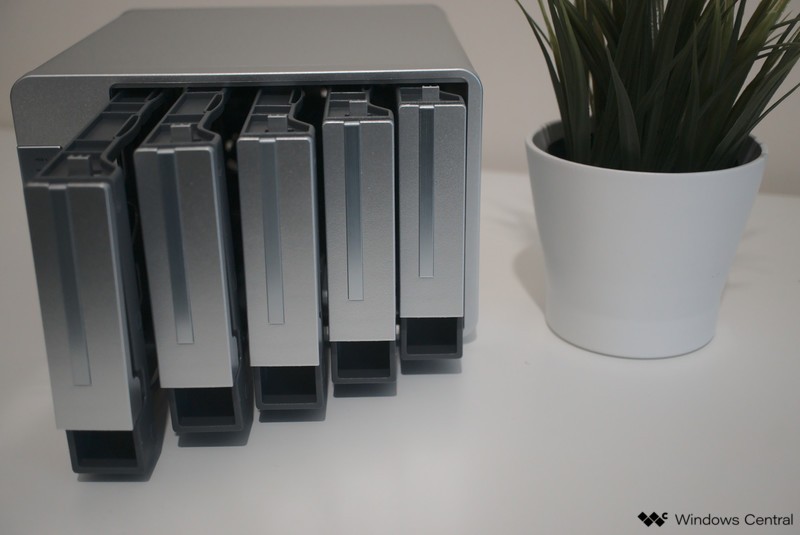 TerraMaster is starting to shine through as the value choice for network-attached storage (NAS) enclosures. While the company doesn’t produce the best NAS for home or best NAS for Plex, it does offer plenty of bang for your buck. The F5-221 is another fine example of this, rocking five drive bays, an Intel processor, and upgradable RAM for less than $400.

The F5-221 is also the larger sibling of the F2-221, which we reviewed some time ago. That was a great value NAS with a few shortcomings, namely the OS — which has since been improved — and lack of any 2.5Gb or 10Gb LAN ports, which sadly hasn’t been addressed with the F5-221.

Still, is the TerraMaster F5-221 worth considering? Read on to find out my thoughts.

Bottom line: It may seem strange to call something that costs multiple hundreds “affordable,” but that’s precisely what the TerraMaster F5-221 is in terms of value. Not only does it come rocking an Intel processor, but also five drive bays and upgradable RAM. It’s just a shame it cuts a few too many corners.

One of the most important components in a NAS enclosure is the processor. The Intel Celeron J3355 is showing its age now (from 2016), but it’s still a pretty good dual-core CPU. The 2GB of RAM is okay for most NAS tasks, but if you want to have multiple users connected simultaneously, running different apps, you’ll want to bump this up to 6GB with a 4GB module.

The five drive bays allow for the installation of up to five 16TB HDDs that total 80TB of capacity. This will be reduced depending on which RAID configuration you choose. Running the NAS with all bays populated should see it hover in the mid-50s for power draw in watts. That’s not too bad, especially given two 80mm fans are included to keep everything running cool.

The design of TerraMaster’s range of NAS enclosures is refreshing to the eye. In a sea of black slabs of plastic and metal, it’s pleasing to see manufacturers looking to differentiate their products with unique designs, and the F5-221 is certainly unique. It’s also packaged well, which is a bonus for receiving a product you paid for in one piece.

As well as the two polystyrene pieces that secure the NAS inside the box, a small brown package contains a quick start guide, screws for mounting drives, power cable, external PSU brick, RJ45 Ethernet cable, and some labels for the drive bays. Once unboxed, you’ll be greeted by the sleek-looking aluminum chassis that wraps around the F5-221. Like other NAS, TerraMaster utilizes a subtle but solid-looking design.

TerraMaster F5-221 is a good value NAS with plenty of storage capacity.

On the front are seven LED indications that represent drive and LAN activity, as well as power. The two sides and top of the NAS enclosure are completely bare, meaning this unit will be drawing all of its air from the front through the installed hard drives. With two 80mm fans on the rear, this shouldn’t be an issue and does help keep the drives cool when under load.

Speaking of fans, the NAS’s rear has two blowers, AC input, two USB 3.0 ports, and two 1Gb ports. The HDMI output and a further two Ethernet ports are cut out but not used. While there’s no display here like you’d find on an ASUSTOR NAS enclosure, it’s pretty easy to connect and fire up the web UI to manage the F5-221.

That’s really all there is to this NAS in terms of features. Unfortunately, while you’re saving money on a five-bay NAS, you do miss out on a few luxuries like an M.2 slot for cache, faster LAN ports, and video out. TerraMaster does allow you to install an additional RAM module, which can bump up the capacity to 8GB.

It’s not so easy to access this module slot. Not only do you need to remove the rear panel, but also the outer shell and bottom. It can be a slight pain to re-assemble.

Setting up the TerraMaster F5-221 is a simple process. TerraMaster, like its competitors, offers a utility suite that can be downloaded to search for your NAS and automatically connect to it using your browser. You can skip this step (which I do) and simply find out the IP address it has been assigned by your network and load it up in your browser.

The initial setup wizard will run you through a bunch of settings, including admin account, actually installing the OS, configuring hard drives (and RAID), and more. This process used to be a little hit and miss, but TerraMaster has improved it making it almost painless to pass through. For storage, the five drive bays can be configured into RAID 0, 1, 5, 6, or 10.

This NAS enclosure is more than powerful enough for most household use.

Let’s talk processors. That Apollo Late Intel Celeron J3355 may be from 2016, but it’s still a dual-core 64-bit desktop-class processor/ Manufacturered on a 14nm process, it has a TDP rating of just 10W. The integrated Intel HD Graphics 500 series GPU can hit 700MHz with boost and supports a variety of decode hardware acceleration, which is handy for Plex Media Server.

The most straightforward test to perform on a NAS is data transfer using drop and drag within Windows 10. Since we’re only able to utilize a single 1Gb LAN port, the results were in line with expectations. Upload and download speeds ranged between 90MB/s and 110MB/s. If you need more bandwidth for substantial file transfers, you’re going to need a different NAS as the F5-221 won’t keep up.

Streaming media is a similar story. We’ve seen some positive results with the Intel Celeron J3355 for Plex, and the F5-221 doesn’t disappoint. The RAM is a little on the slow side (and there are only 2GB), so you may encounter some stuttering as you remotely connect to the Plex Media Server, but you can easily stream 4K content from this enclosure, so long as you don’t need to transcode.

Should you buy the TerraMaster F5-221?

Who it isn’t for

The competition for the TerraMaster F5-221 is fierce. Synology released the DS1520+, which replaced the excellent Synology DS1019+, but that NAS enclosure comes in at a whopping $700. It does come rocking a better Intel CPU, DDR4 RAM, and Synology’s excellent OS, but you’re certainly paying for the aforementioned luxuries.

It seems this is where TerraMaster is attempting to place the F5-221. It’s $340 cheaper than its rival from Synology but comes with less capable internals. This isn’t an issue for most people looking for a home NAS enclosure, but it means you’ll be limited as to what you can do with it. There are no M.2 slots, the RAM is slower, the OS (while improved) simply doesn’t match Synology DSM.

In terms of competition, TerraMaster’s NAS here is a good value proposition, but it’s still $340. That’s a lot of money, especially when you consider some of the shortcomings that it has. Still, it’s a great little enclosure, especially if you’re getting started with your first NAS and want something that will be able to serve a busy household or small office.

It won’t win any awards for performance, nor will it blow you away with functionality, but with up to five drive bays available, you can store a lot of data on this enclosure. TerraMaster gets the basics right here; I’d just like to see some more advanced features trickle down, like 2.5Gb LAN and an M.2 slot or two.

The TerraMaster F5-221 is worth considering if you’re on the hunt for one of your first NAS enclosures that will be installed inside a busy household or small office.