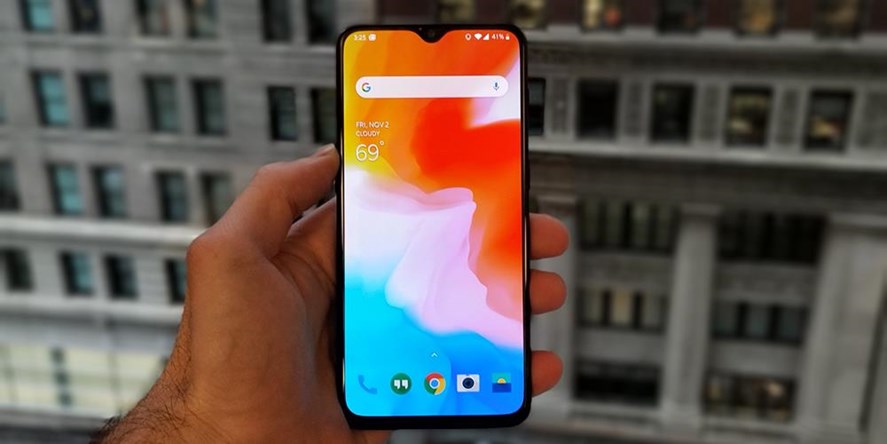 Those around me at work, New York City, and the US in general who
buy top smartphones are spending $750 or more, with some of them
even spending over $1,000 on a smartphone.

And then there’s me. I’ve been using the $580 OnePlus 6T with 8
GB of RAM and 128 GB of storage for a little over a week now, and
I feel like I’m cheating with a smartphone that costs $550 at its
base and does everything I want it to do just as well as the
other top phones I’ve tried this year.

Surely, something this good shouldn’t cost so much less than
everything else, right?

To be accurate, I didn’t pay for the OnePlus 6T I was using. It’s
a review unit that OnePlus sent me. Still, had I shelled out $550
to $580 of my own money for the OnePlus 6T, I’d feel like I know
something that others around me don’t, and that I’m getting away
with something I shouldn’t.

Check out what it’s like to use the OnePlus 6T:

First of all, I’m very much aware of OnePlus and its phones, whereas a lot of people probably aren’t. 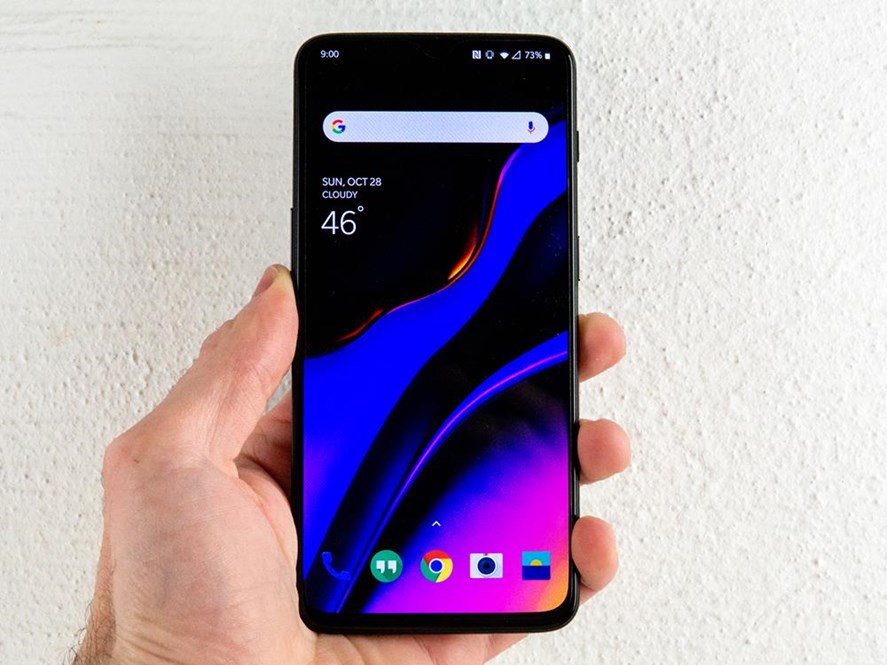 OnePlus phones have been available to buy since the very first
OnePlus One way back in 2014. And yet, I’d bet money that a lot
of people have never heard of OnePlus.

That’s largely because OnePlus phones before the OnePlus 6T were
never sold by carriers in the US, which happens to be where the
majority of Americans buy their smartphones. If it isn’t at the
carrier store, it likely doesn’t exist in the average American
smartphone buyer’s mind.

But ever since the first OnePlus phone, the company has gained a
small-but-growing fan base in the US. And now that a OnePlus
phone is available to buy at T-Mobile’s physical stores and
website, awareness of OnePlus is likely to grow.

Still, those on Verizon and AT&T won’t find the OnePlus 6T at
their carrier stores, so that leaves a major chunk of American
smartphone buyers who likely don’t know about OnePlus phones. In
that respect, OnePlus phones are still a secret.

The OnePlus 6T doesn’t run any slower than the top smartphones of 2018. 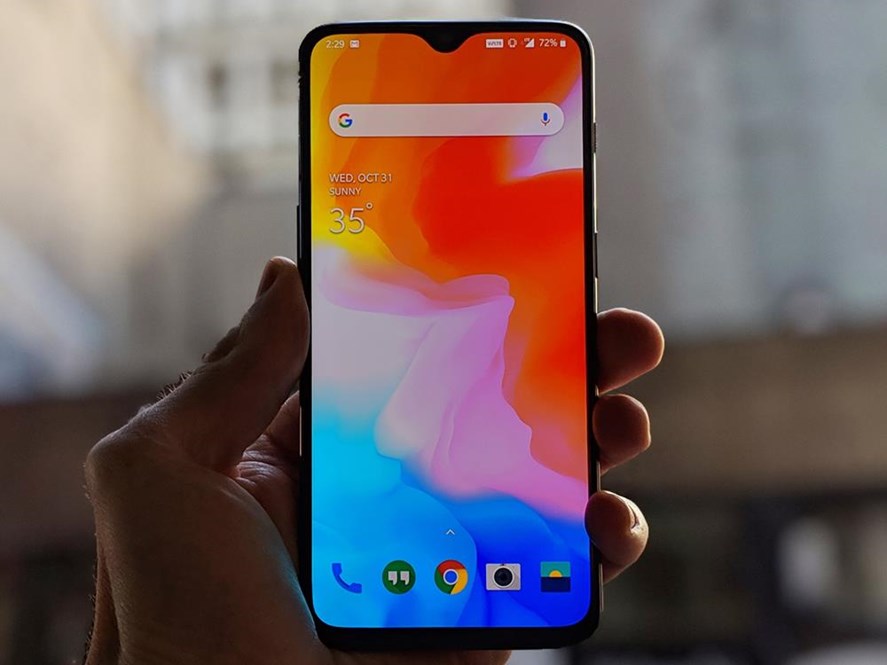 In fact, from my own experience, OnePlus phones tend to run
slightly more quickly and more smoothly than
those other top Android phones. That’s likely because OnePlus
phones run a comparatively light “skin” – an extra layer of
software that runs on top of Android for extra features and
design elements.

It also likely has to do with the extra RAM that OnePlus phones
typically have compared to most top Android phones. The OnePlus
6T comes with 6 GB to 8 GB of RAM, which is on the higher end
compared to most smartphones in general.

The extra RAM allows for more apps to be stored in the phone’s
short term memory, which means smoother and faster switching
between the apps you often use.

Whatever is going on, the OnePlus 6T runs as well – if not better
– than the more expensive Android competition. It’s tougher to
gauge the performance compared to iPhones, as those run Apple’s
own chips and operating system. Either way, the OnePlus 6T
definitely doesn’t feel slower than the latest iPhones.

This thing looks just as good as all the others. 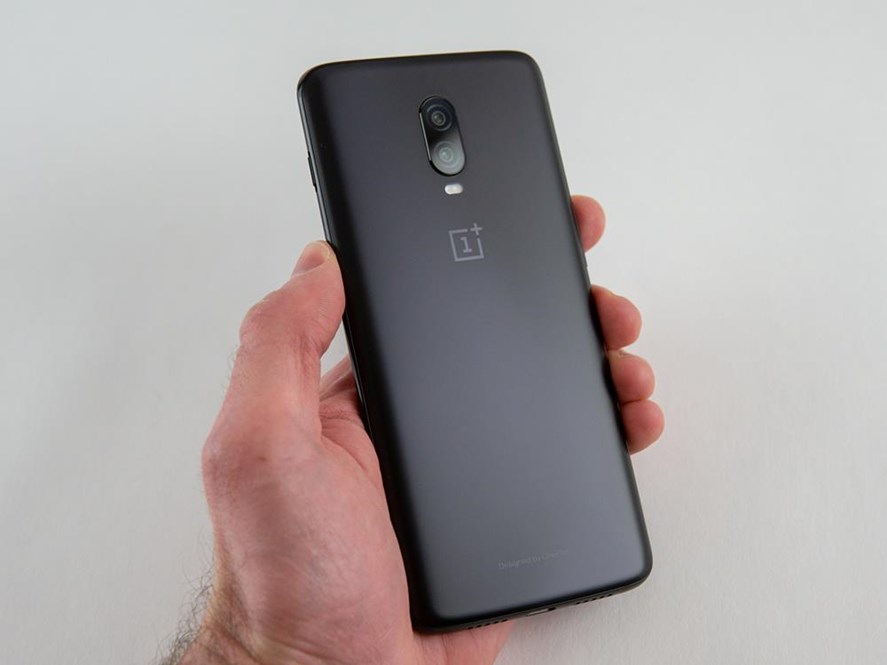 Despite its lower price tag, OnePlus didn’t skimp on design,
either. The OnePlus 6T has a sleek metal and glass design that
looks and feels unique.

The back glass, for example, has a frosted matte finish, which
looks and feels superior to smooth glass, in my opinion. Only the
Pixel 3 smartphones have a similar finish on the back, but
they’re late to the party – OnePlus already brought the matte
glass texture with the previous OnePlus 6.

The front surface has bezels around the display that are just as
narrow – if not narrower – as other smartphones. Even the notch’s
water-drop design is unique, and it’s small and unobtrusive. 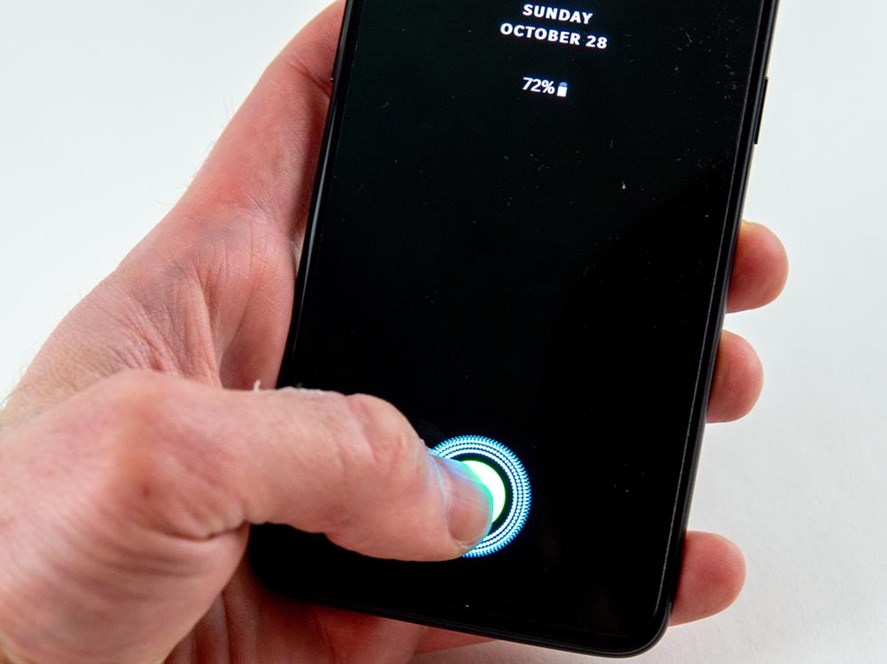 Like many other phone makers when display bezels became narrow,
OnePlus moved its fingerprint sensors to the backs of its phones.
With the OnePlus 6T, it moved the sensor back to the front,
despite its narrow bezels. That’s because the OnePlus 6T is the
first smartphone that’s available to buy in the US that comes
with a hidden “in-display” fingerprint sensor. Yes, it’s under
the display.

The real selling point here isn’t that it’s the first in-display
fingerprint sensor, but rather that it’s back on the front of the
phone on the OnePlus 6T. I truly welcome the ability to unlock
the OnePlus 6T when it’s laying flat on a table without having to
pick it up and reach around the back for a rear fingerprint
sensor.

It works surprisingly well for a first generation effort at
in-display fingerprint sensor. I have some trouble when I’m in
direct sunlight, and that’s because of the way in-display
fingerprint sensors work. They focus bright light around the
sensor and finger to recognize your fingerprints, and bright
external lighting apparently has a negative effect on this.

When I faced that issue on a bright sunny day, the OnePlus 6T’s
insanely fast face unlocking took over and unlocked the phone
without issue. It’s a great backup if you want it to be, or a
great primary option to unlock the phone, too.

I should mention that the sharp, bright light that emanates from
the in-display fingerprint sensor is uncomfortably bright in a
dark room, or when you’re in bed getting ready to go to sleep.
It’s something you can avoid by setting your home as a “trusted
place” in the Android menu, just to avoid using the fingerprint
sensor altogether in the dark.

The OnePlus 6T has one of the biggest screens on any smartphone. 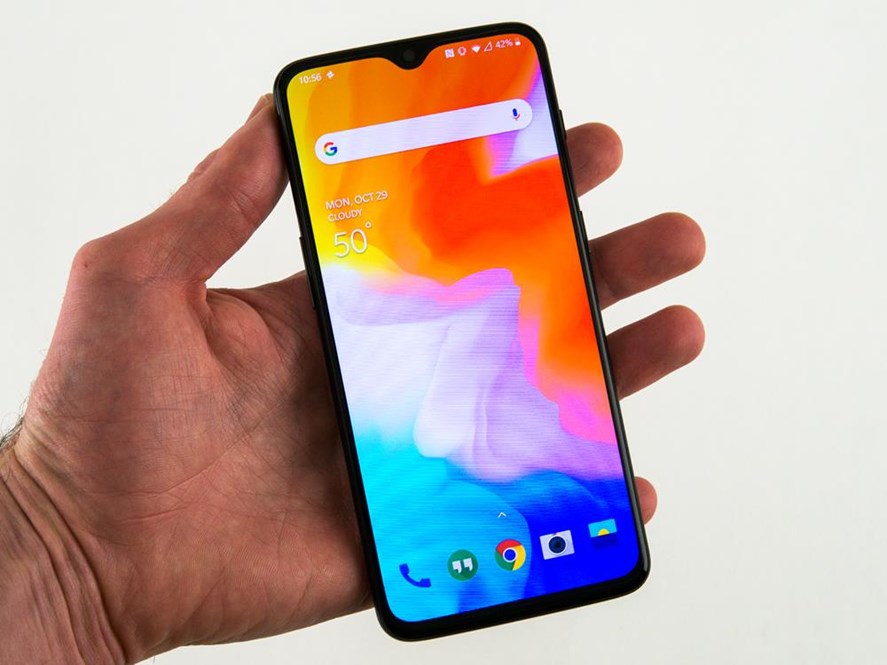 The OnePlus 6T has a 6.4-inch screen that’s on par or larger than
than the bigger models of smartphones out there, like the Galaxy
S9 Plus, Google Pixel 3 XL, LG G7, and LG V40. Those larger
models tend to cost more than the standard-size models.

And yet, the OnePlus 6T offers a large display for a smaller
price tag than even the smaller standard-size smartphones out
there.

The camera is just as good as most smartphones, albeit with fewer features. 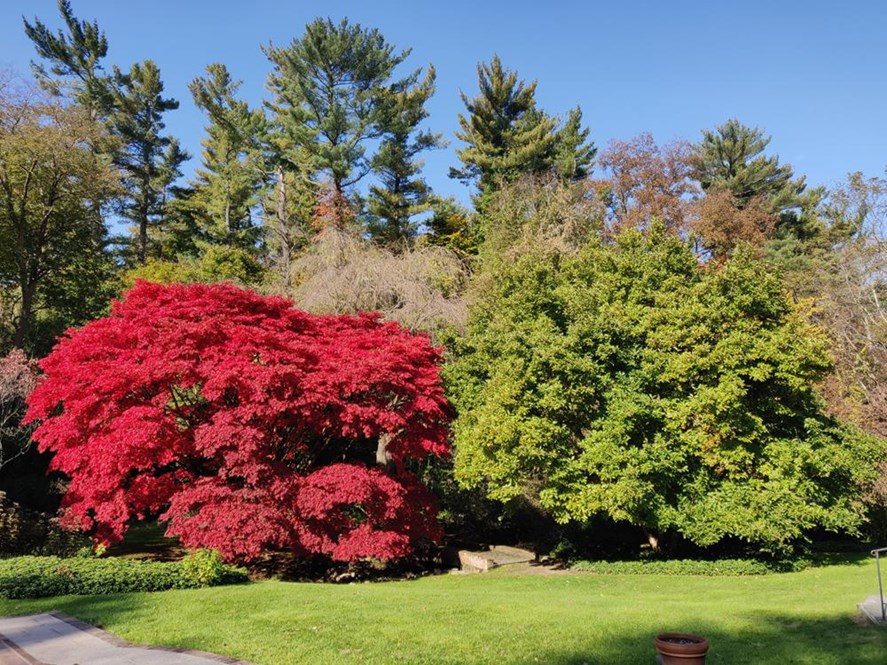 I’m just as happy with the OnePlus 6T’s camera as I am with most
other smartphones. The only exception is the Google Pixel 3
phones, which have the best smartphone cameras, hands-down.

With the OnePlus 6T, however, you don’t get as many camera
features as you would with a more expensive smartphone. For
example, there’s no optical zoom lens for better closeup shots
like you’d find on the Galaxy S9 Plus, nor is there an ultra-wide
angle lens for capturing ultra-wide photos, like you’d find on
the LG G7. Then there are phones that have all three types of
lenses, including normal angle, ultra-wide, and zoom lenses, like
the LG V40.

I can take selfies that look just as good as most smartphones, but two Android phones in particular have extra selfie camera features that the OnePlus 6T doesn’t have. 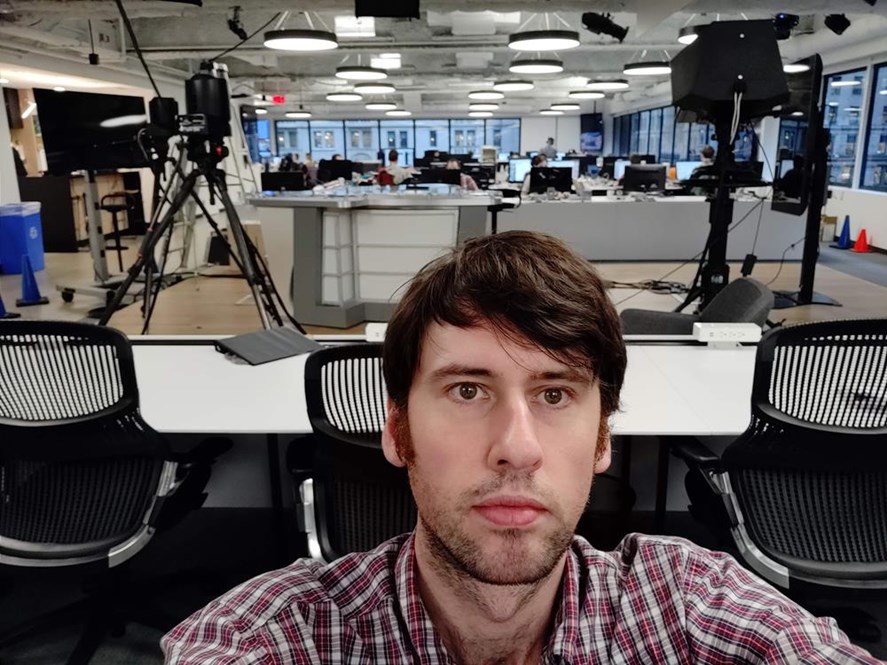 I’m not a big selfie taker, but they look just as good as most
other top Android smartphones.

As I mentioned, there are two top Android phones that give me
selfie features, and they’re pretty meaningful. The LG V40 and
Pixel 3 phones have a secondary ultra-wide angle selfie camera
lens for ultra-wide selfies that let more people and scenery into
a selfie.

And there are a variety of other features that the OnePlus 6T doesn’t have compared to more expensive smartphones. 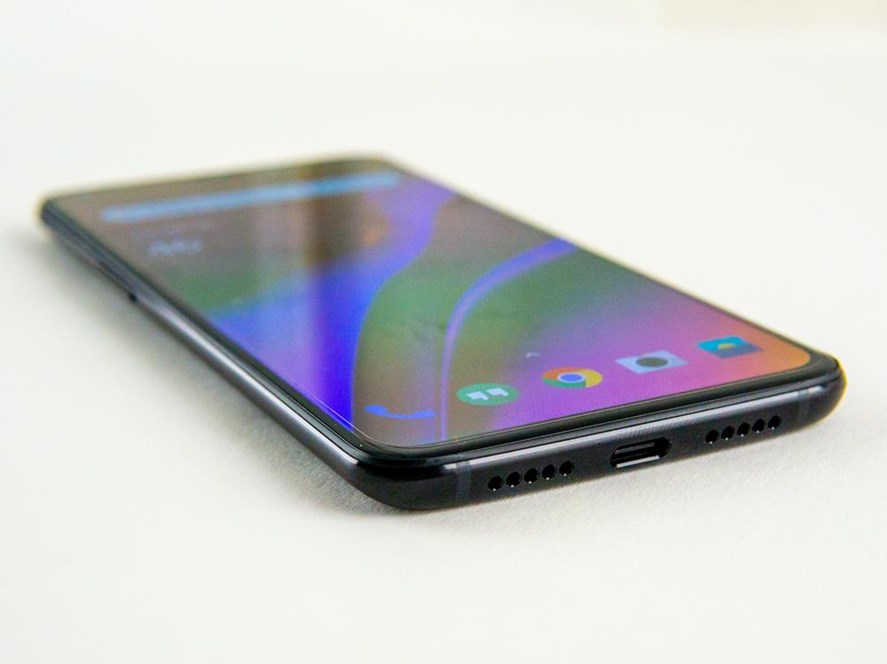 You can check out a full list of things that expensive smartphone
have that the
OnePlus 6T doesn’t right here.

In a nutshell, you’re not getting the following features in the
OnePlus 6T that you’d find on an expensive smartphone:

But having used the biggest and best smartphones of 2018, I can’t say that I missed any of those extra features while using the OnePlus 6T. 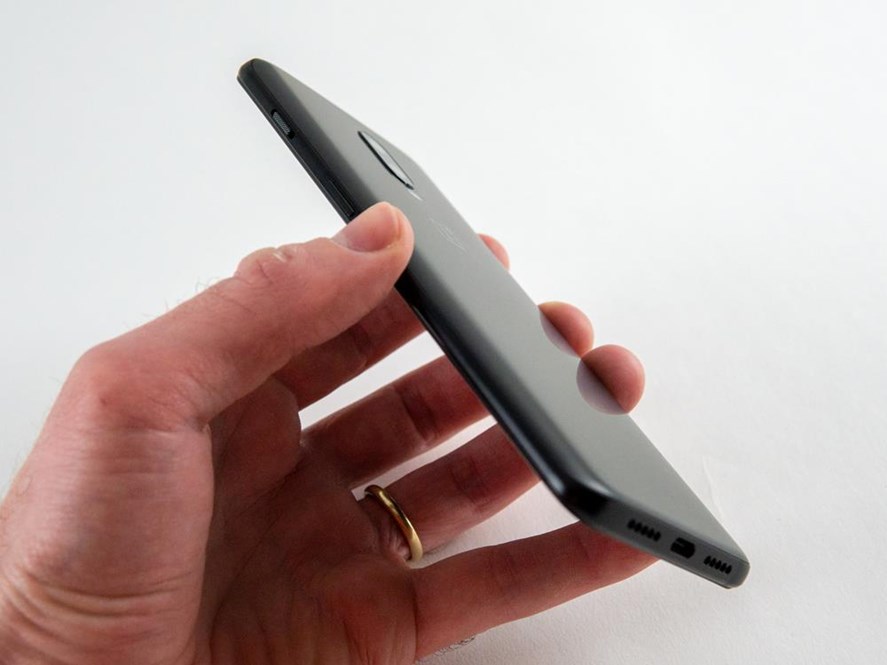 Sure, there were times when a 2x optical zoom lens would have
been nice, and the single loudspeaker on the OnePlus 6T doesn’t
sound as good as the stereo speakers on other phones. But would I
pay an extra $250 minimum for those features? Or any of the other
features I listed above? No.

The only smartphone that does tempt me despite it’s high
$900 price tag, is the Google Pixel 3 XL. It just takes the
best photos out of any smartphones. And now, when I don’t
use Google’s Pixel 3 XL, there’s a little voice in my head
telling me that the photos I’m taking with other phones aren’t
going to be as good.

The OnePlus 6T is the best kept secret in the smartphone world, and you should absolutely consider it.

If I bought the OnePlus 6T myself, I’d have this cozy feeling
that I made the right decision. I just don’t see the need to
spend $750+ for a sharper display or wireless charging, or an
official water resistance rating.

Of course, I can’t speak to those who do thoroughly value those
features. If you do, then the OnePlus 6T isn’t for you, and your
best bets are phones like the Pixel 3 phones, Galaxy S9 phones,
the LG G7/V40, and the iPhone XR and XS phones, with a lean
towards the
Pixel 3 and Pixel 3 XL.