The first full-scale build of hyperloop technology – the futuristic mode of transportation cohesively conceptualised by tech entrepreneur Elon Musk – is being built in France.

One of the companies racing to be the first to get a viable system up and running, Hyperloop Transportation Technologies, took delivery of its first set of tubes this week, which will be used in the construction of the first full-scale build of the project.

The first phase of the build will include a closed 320 metre system that will be fully operation this year, the group said. The tubes, which have a diameter of 4 metres, are designed to move both people and freight to the HyperloopTT research and development center in Toulouse, France.

A second system of 1 kilometre, that will be elevated on pylons, 6 metres in the air, will be built and completed in 2019, it said.

“Both systems are fully upgradeable and will be used by both HyperloopTT and partner companies. The full-scale passenger capsule, currently near completion at Carbures in Spain, is scheduled for delivery to the facility this summer for assembly and integration,” the group said.

The hyperloop concept was first unveiled by Musk in 2013. Although the idea for using ‘tubes’ to provide a high-speed mode of transport had been thought of long before Musk’s documents were published, it was the first time that the concepts had been presented as a viable technology.

Several companies have since taken on the challenge to develop the technology using different methods.

Musk, himself, has continued to build on the ideas, and recently demonstrated the new ways that he envisioned the system to work.

Other companies, like Hyperloop-One, have also made progress on testing tracks and transportation units, slowly building up to match the conceptualised transport speeds of 750mph (1,200kmph).

According to HyperloopTT, the project is about more than just bragging rights, or being the first.

“The real opportunity is to create an efficient and safe system with an unparalleled passenger experience,” it said.

“Building in full-scale means we’re committed to innovation in the long-term. We’ve pioneered the technology, proved feasible and insurable by the world’s largest reinsurance company, Munich RE.

“We have agreements in place in nine countries where we’re working on feasibility and regulations. We have a research centre for freight and logistics in Brazil and a facility in Toulouse where we’ll deliver the first full-scale passenger capsule.

“Hyperloop is no longer a concept, it has become a commercial industry.”

Read: Elon Musk has provided a clearer glimpse of what his hyperloop system could look like 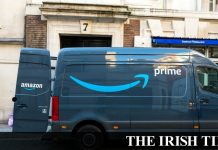