Vehicle safety experts have named the five best new cars to hit the market in the last 12 months based on their crash test performance in Europe’s stringent assessments.

The models have been flagged by UK automotive research centre, Thatcham Research, as part of the forthcoming What Car? Car of the Year 2021 awards later this month.

Motors launched in the last year by Honda, Mazda, Seat, Toyota and Volkswagen have all received the highest recommendation from the vehicle safety and security group – which has also listed five new pieces of in-car technology that it believes will be important for saving lives. 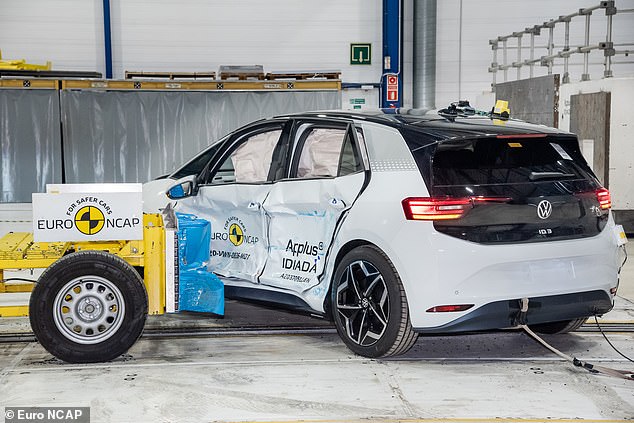 Safe new cars for 2021: A UK automotive research centre has named the five latest models on sale in Britain this year that provide the best protection for occupants and other road users

The five safest new motors were handpicked by the judges based on the recognition of their performances in the latest Euro NCAP crahs tests. But the list also took into account affordability, the popularity of the models in the UK and any additional innovative safety technologies they offer.

Thatcham Research says these cars have had to face tougher scrutiny than ever before, thanks to stricter testing protocols that came into force last year.

This includes Euro NCAP’s new ‘passive’ safety assessment, which not only rates how well cars protect their occupants in a collision but also how they impact another vehicle involved.

The test will ultimately downgrade the safety scores of big SUVs if they’re found to cause catastrophic damage to smaller cars in a shunt.

Despite these harsher assessments, one of the five safest cars of 2020 listed below is an SUV.

Matthew Avery, director of research, Thatcham Research, said: ‘The cars that have come through our judging and made it to the shortlist have had to earn their stripes this year. The new protocols that we helped to develop are designed to expose any weaknesses in a car’s capability or testing performance.

‘I’m pleased to say the manufacturers that built the cars which were awarded a five-star Euro NCAP rating in 2020 have really risen to the challenge presented by our new protocols and that’s great news for road safety.

‘These cars are impressively safe and the carmakers that have produced them should be congratulated for their work – particularly during what has been a very challenging year for the motor industry.’

The five best-rated models for 2021 are… 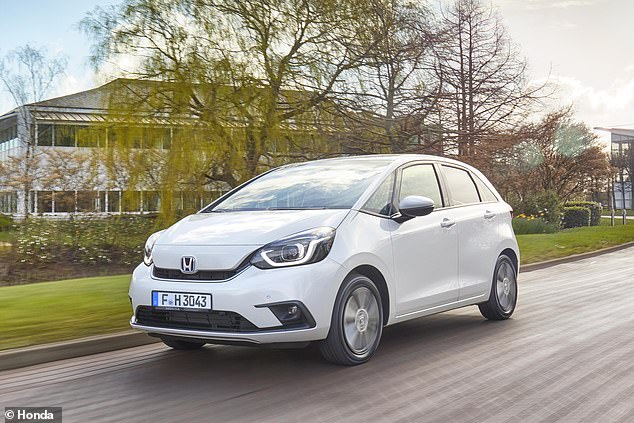 The Honda Jazz has been a long-running favourite in the UK, especially among senior drivers. The latest version of the versatile supermini was launched last year 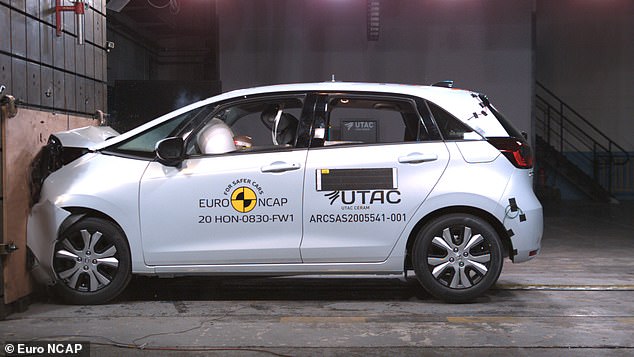 Thatcham Research said the Jazz supermini – which has been a long-running favourite with senior drivers in the UK – is a solid performer across all test categories.

The versatile compact hatchback topped the 2020 charts with a score of 80 per cent for the protection it offers to vulnerable road users in Euro NCAP’s assessment.

‘The introduction of a centre-mounted airbag to limit front seat occupant interaction in far side collisions also helped this hybrid achieve an impressive 87 per cent in the adult occupant protection category,’ said Mr Avery.

Price from: £27,495 (price for ‘First Edition cars with more affordable version to follow) 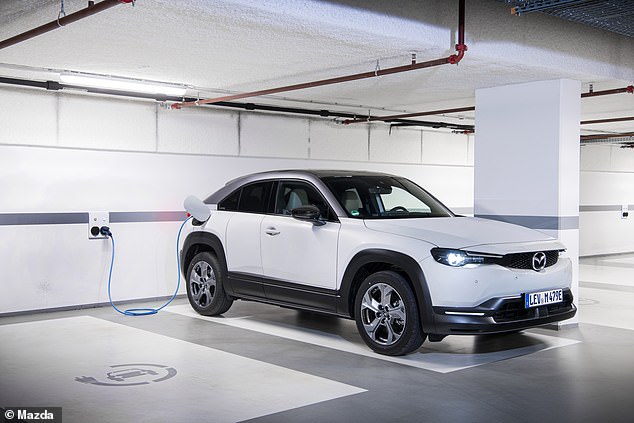 The MX-30 is the first all-electric car Mazda has put into production. It says the SUV is for urban use, which is why it only has a range of 124 miles 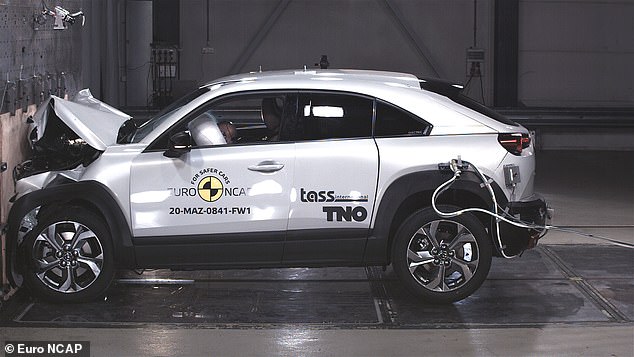 The MX-30 is Mazda’s debut electric car and features in This is Money’s top 21 cars arriving in 2021.

It is an EV that’s aimed at the more affordable end of the market, though it has a pretty low driving range of just 124 miles on a full charge.

While it might not be the rangiest of EVs, it is among the safest to hit the market, achieving the second highest Euro NCAP adult occupant protection score in 2020.

Thatcham added that it also has ‘impressive passive safety credentials’, which are strengthened by its 87 per cent score in the child occupant protection tests. 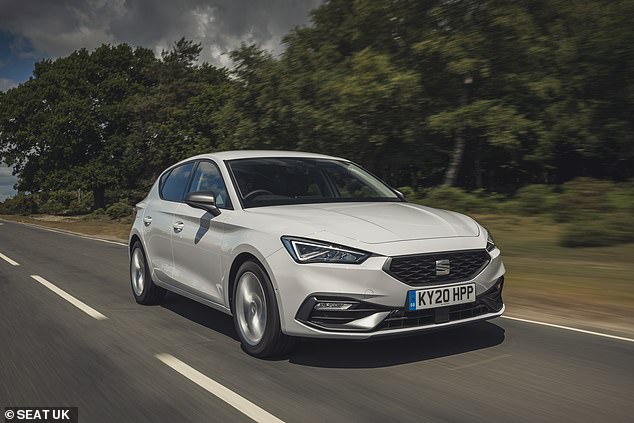 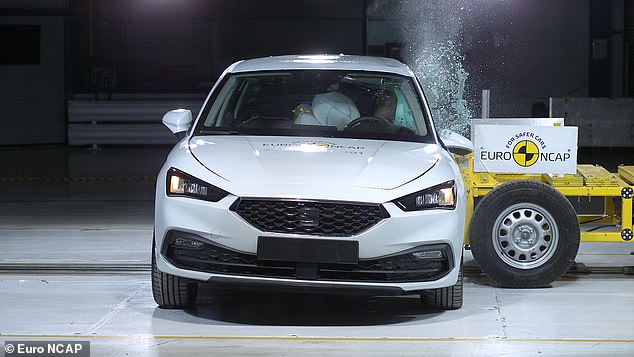 The new Seat Leon shares its underpinnings with the latest Mk8 VW Golf but at a lower price.

The safety experts say the affordable small family car ‘offers sound safety performance across the board’, including a mightily impressive 92 per cent Euro NCAP adult occupant protection – the highest achieved by any car in 2020.

The latest derivative also has a new centre airbag, which prevents the front-seat passenger and driver clashing heads in a side impact.

‘The presence of a multi-collision braking system is also a useful addition as standard,’ Mr Avery added. 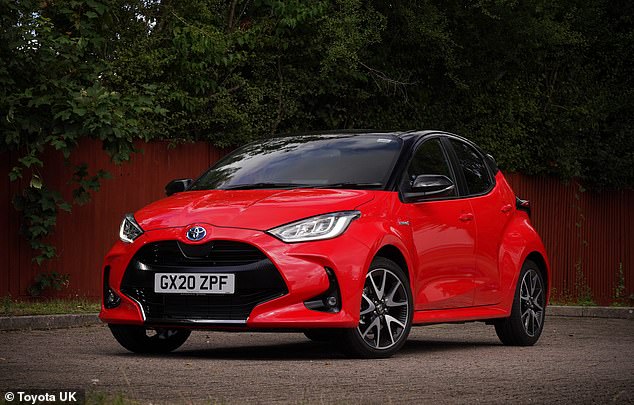 The Toyota Yaris is another small car that has always sold well in the UK. The latest version was deemed by safety experts to offer good value for money 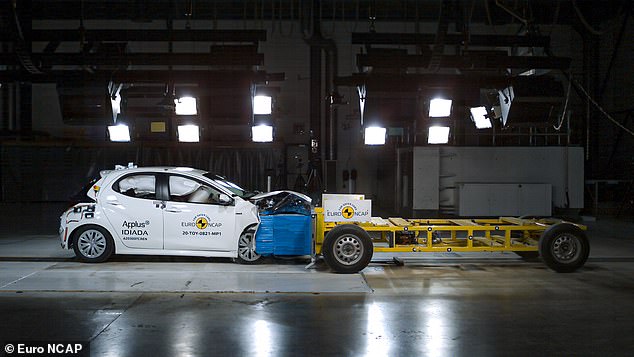 As well as helping to mitigate crashes, the Yaris was also highly rated for reducing the impact on pedestrians and cyclists if they were unfortunately involved in an accident

The Yaris was the 15th best-selling car in the UK last year – you can see the full rundown of the 20 most popular models in our list.

‘The Yaris represents good value for money as a supermini with a solid level of active and passive safety technology,’ the expert review team said.

The Toyota is capable of reducing the likelihood of customers having accidents, scoring 85 per cent for safety assist in the Euro NCAP tests. A score of 78 per cent in the vulnerable road user category means it also offers strong protection to pedestrians and cyclists. 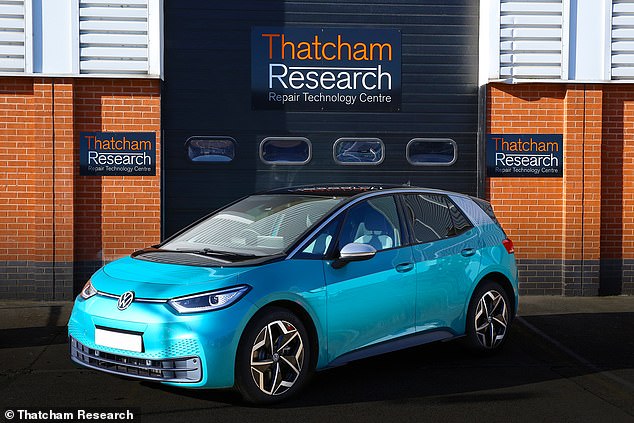 The Volkswagen ID.3 is the German maker’s first specifically-produced electric vehicle. It arrived in the UK last year and in December was the fourth most-registered new car in Britain 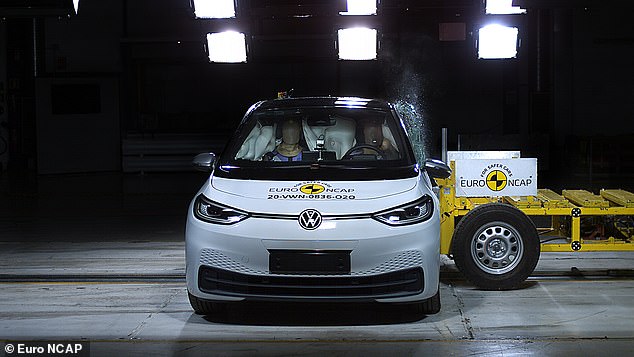 The new ID.3 features the latest in restraint technology, including innovative side airbags to protect occupants

The ID.3 is a huge car for VW’s fortunes. Not only is it the first model released in the all-electric ‘ID’ range but is also the first dedicated EV the German makers hope will repair its reputation after the diesel emissions cheating scandal from five years ago.

Thatcham Research said the ID.3 has been ‘impressive straight out of the box’, topping safety assist and child occupant protection Euro NCAP crash test categories during testing in 2020.

It also features the latest in restraint technology, including innovative side airbags to protect non-struck-side occupants.

What is it? Android Automotive OS is a new breed of infotainment platform built into cars by car makers. Removing the reliance on potentially distracting touchscreens because the voice-activated Google Assistant is built into the car, drivers can download media apps direct to their vehicle, with no mobile device required. Android Automotive OS can also be adapted via over-the-air updates.

Avery says: ‘Voice-controlled infotainment systems like Android Automotive OS bring clear safety benefits because the driver doesn’t have to take their eyes off the road to use them. And the fact that Android can be updated over-the-air means it will be constantly improved, whereas locked-in own brand infotainment systems will only become more dated and less user-friendly.’

What is it? Ford’s new Lane-Keeping System with Blind Spot Assist made its debut on the Kuga SUV in 2020 and builds on the capability of the brand’s Blind Spot Information System. The Lane-Keeping System with Blind Spot Assist technology monitors the driver’s blind spot for vehicles approaching from behind, and can apply gentle counter-steering force to warn the driver and discourage a lane change manoeuvre if a potential collision is detected.

Avery says: ‘This isn’t new technology altogether but instead of having a warning, you now have a solid form of intervention which is helpful. It’s much better for the car to intervene on behalf of the driver when there’s a potentially dangerous situation because incidents tend to manifest themselves so quickly. It’s also good news that this kind of tech is available on a mainstream car like the Kuga.’

What is it? This advanced driver assistance system aims to enhance safety for Sorento occupants and other road users by eliminating a driver’s left- and right-side blind spots. It displays a high-resolution video feed on the dashboard instrument panel when the driver indicates to change lane with another vehicle hidden in their blind spot. The video feed is generated by discreet wide-angle cameras, one hidden in each of the door mirror housings.

What is it? This technology wirelessly sends new features to Tesla vehicles that improve functionality, performance and safety. Tesla, which has faced criticism from Thatcham Research about the mis-leading naming of its Autopilot technology, has used OTA updates to make a raft of notable improvements to its vehicles during 2020, including the addition of vision-based speed assist capability, a cabin camera to capture video clips prior to a collision or safety event, dash-cam viewer improvements, and traffic light warnings.

Avery says: ‘Tesla was the first to introduce over-the-air updates and it’s proved a benchmark innovation. While most OTA updates are based on user functionality, it’s proved a great way to enhance safety performance too. Tesla has progressively increased the safety performance of its vehicles over the last three years. For example, the previous generation software on the Model S was lacking in basic crash-avoidance capability and now, despite being the same car, it’s the benchmark. No other car can claim that kind of dynamic improvement.’

What is it? This air purification system removes harmful particulates from a Volvo’s cabin atmosphere to ensure occupants breathe clean and healthy air. Incoming air passes through an ioniser that pre-charges the microscopic particles which then stick to a fibre-based filter that carries an opposite charge.

Avery says: ‘This is an interesting innovation because it’s the first time a car has had an ioniser inside its air filtration system. Removing harmful particulates makes the cabin air cleaner – which is particularly relevant today with increased levels of pollution – and that’s good news for people’s health and their attentiveness behind the wheel.’

SAVE MONEY ON MOTORING

Pandemic changes may point way to sustainable cities of the future

Electric cars are not the only green solution | Electric, hybrid and low-emission cars