11 The 1970s brought us bell-bottom jeans, Star Wars, Roger Moore Bond films…and the gas crisis. Though disco may have killed rock music, the gas crisis killed the muscle car era. Auto manufacturers shifted focus to fuel economy, gaudy paint schemes, and luxury cars. Not all 1970s cars are bad, nor are all the cars on this list. Some of them are truly great and could make for a good project. Some cars just aged like disco or tube socks.

So put in an 8-track and find your hair rollers, here are ten ’70s muscle cars that have failed to hold up value five decades later.

The Dodge Aspen and Volare were twins, with the only difference being the badge on the grille. These cars were competitive for the day, with roughly 155 hp and all tacky paint schemes and chrome you could ever wish for. The 318 cubic inch V8 and three-speed automatic are forgettable by modern standards though, and chances are you’ve never seen one of these until now.

Many of these cars were either crushed, crashed, or left to rust in junkyards, so it’s seldom to see them for sale, but they still make an occasional appearance. The only Volare Roadrunner on Bring a Trailer only picked up $6,500, and it was in mint condition.

Related: A Look Back At The 1980 Plymouth Volare Roadrunner

To relive Dodge’s glory days in NASCAR, the Magnum was launched. The underpinnings were similar to the legendary Charger yet lacked the same magic, with the top optioned Magnum only making 190 horsepower…from a 400 cubic inch V8. The Magnum had all the popular features at the time, such as t-tops, chrome wheels, and plush interior pieces.

The Magnum proved to be unpopular in NASCAR and is credited to why many drivers moved on to GM or Ford cars in the 1980s, which eventually caused Dodge’s complete withdrawal from NASCAR. No Dodge Magnum’s have been sold on Bring A Trailer, but several auction sites show high bids at around $15,000 for a factory fresh example.

Chevrolet launched the Vega in an attempt to compete with the legendary Plymouth Duster and spunky Ford Maverick but failed to do anything serious. Many Chevy fans were disappointed at the lack of big engines for the car, with only inline fours and sixes being offered. In an attempt to save the name and Chevy’s reputation, GM partnered with English tuner shop Cosworth.

The resulting car had stiffened suspension, custom inline four with fuel injection, and a spruced-up exterior. The car was a hit amongst critics but failed to mount any lasting legacy; being outshone by the legendary Camaro and Corvette. Low mileage 1975 Cosworth Vega was sold on Bring A Trailer for only $9,400.

Related: Here’s Why The Cosworth Vega Was Built For The Junkyard

The Monte Carlo began life as a strong competitor to Ford’s Thunderbird. It was offered with a range of V8 engines and luxury features, and the car sold like hotcakes. After the gas crisis and some questionable fashions of the 1970s, the Monte Carlo became another boring square car with tacky upholstery and an anemic V6. 1979 was also the last year for a manual transmission in the Monte Carlo.

Though the car had some success as a NASCAR chassis, it proved unpopular in showrooms by the 1980s and GM promptly released a new Monte Carlo in 1982. No examples of these could be found on Bring A Trailer either (starting to see a theme here?), but one is listed on Smart Motor Guide for a measly $5,200.

Related: Here’s How To Know If An Old Monte Carlo Is Right For You

Mopar fans are already cringing at the mention of this one; an ugly scar on the history of their favorite brand. Dodge imported the Mitsubishi Galant and tried to fool buyers into thinking it was a continuation of the legendary Challenger.

Yellow stripes, bright paint, and chrome wheels should have made it a hit, but it failed to find a market. The Challenger had an anemic straight-four that couldn’t even make 100 horsepower. Critics were not fond of the looks, and it lacked the characteristics of classic American muscle cars. No luck in finding this car on eBay, thankfully most of them have met the junkyard or the crusher by now. One did sell on BarnFinds for $6,900 in near factory condition.

Ford launched the Cougar as an upscale Mustang to be sold under the Ford division, and it did well doing that. When the gas crisis hit and personal luxury cars became a fad, the Cougar was moved to the Thunderbird chassis and gained a lot of weight and lost a lot of horsepower. By 1979 the Cougar lost most of what made it so special in the 1960s.

Sure, it had a big V8 and still had the XR-7 trim, but it wasn’t the same. The Cougar never recovered from the 1970s and never experienced the fanfare 1980s Mustangs and Thunderbirds did. A perfectly gaudy example was sold on Bring A Trailer for $3,200…the same price as some used economy cars.

Related: 10 Things You Didn’t Know About The Mercury Cougar

The 1969 Dodge Daytona destroyed the competition in NASCAR, eventually being banned by NASCAR in 1971. Many Mopar fans would call this one of the if not the best car made by Dodge during the 60s. Unfortunately, the gas crisis and personal luxury trend of the 1970s got to the Dodge Charger and turned it into a soft, pillowy ride for grandpa to take to church. The sheet metal was so ugly and air-catching that Dodge requested not to use it in NASCAR.

Dodge tried to boost sales and rebuild the Charger’s reputation by launching the Daytona trim in 1975 and running it until 1978. The trim gave the Charger chrome wheels, heavy-duty suspension, and wait for it…a 190 horsepower 400 cubic inch V8. Sales were slow because of the gas crisis, Dodge’s lack of success in NASCAR, and the shift towards economical cars. Most of these cars rusted out due to Chrysler’s poor quality control of the 1970s. The Charger and Daytona names both were used by K-cars in the 1980s, to the disapproval of many Mopar fans. Because of the previously mentioned rust issues, these cars are actually extremely difficult to find, but one is for sale on AutoTrader for just under $8,000.

The Matador was a fairly popular family vehicle at the time, finding use in police and taxi service. AMC was oftentimes left out of the conversation but the Matador proved to be successful for the small automaker. The Matador X was an attempt to bring a fastback coupe into the lineup, mainly so the Matador could compete in NASCAR. Critics at the time called the car good-looking and were impressed with AMC’s styling abilities.

The car featured a line of straight 6s and V8s, with the top optioned V8 making 235 horsepower. 60 was achieved in a respectable 8 seconds. A Matador X has yet to be sold on Bring A Trailer, but Hagerty appraises a good one at $9,000.

Mustang II is an unpopular car amongst Ford fans, muscle car fans, and even non-car fans who are old enough to know what they are. The Mustang II was Ford’s model to save the Mustang name while building a car that was good on gas, small, and still offered some performance.

The Mustang II was actually one of the best-selling Mustangs, despite the negative connotation it has in today’s car culture. Carroll Shelby was in temporary retirement in the late 70s, so Ford couldn’t call on him to modify their models, but they tried their best to emulate what he would’ve done, thus the King Cobra was born. King Cobra models came only with a 5.0 V8, hood scoops, and with a cobra vinyl on the hood that should have alerted Pontiac’s lawyers. A good example on Bring A Trailer sold for an impressive $12,250, still a stone’s throw away from Gen 1 Mustang values though. 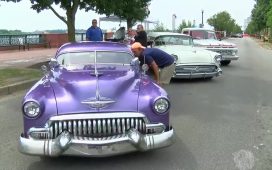