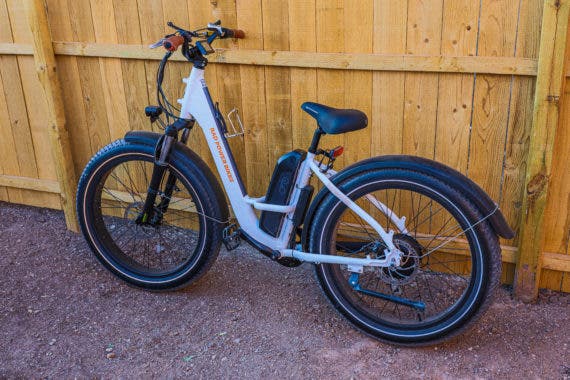 A Radrover Step Thru e-bike. Photo by Jennifer Sensiba.

Flying is great for saving time, at least in theory. If you’re going to go thousands of miles, it makes sense that people would opt for the vehicle that goes hundreds of miles per hour instead of the one that goes 60-90 MPH in most cases. Statistically, flying is safer than driving, too, so it has a lot going for it. Sure, when there’s a big air accident a lot of people die at once, and that makes for headlines, but people dying in small numbers every day adds up to a lot more death.

And yet people still take road trips, and in great numbers, even before the risks of COVID frightened people away from getting on planes. Why is that?

The romantic reason people give is that they want to see what’s between point A and point B on their trips. When you fly, you miss out on basically everything between the airports, and you can’t fly to many amazing places on commercial airliners. The Grand Canyon, Jellystone (let me have some fun here, boo boo), Yosemite, Arches, and many of the other US national parks are best accessed by car, and there are similar great places in most other countries that you can’t readily fly out to.

And yet people still drive between cities, even when there’s nothing but tourist traps along their route, like Arizona’s The Thing or the Barbie Museum, and even when the drive is amazingly boring, like Interstate 20 between El Paso and Dallas, or basically the rest of Interstate 20 (sorry, Mississippi and ‘Bama, greenery is cool but that gets boring, too).

But then again, hours of boredom can be less painful than air travel in some ways. Nobody likes airport parking, declaring and checking any hazardous items (ex. contact lens solution) they may possess, having kleptomaniac strangers rifle through your belongings, and then let the TSA undress you with their eyes after undressing you with their millimeter wave scanners. And all this after standing in long lines and generally being herded around like cattle.

Public transit in most cities is less invasive and a lot faster, but isn’t a lot more pleasant. The days where a jury would acquit Bernhard Goetz are behind us in most places, but you’d still be hard-pressed to find a person who tells you that they love subways. Many people choose instead to use bikes, scooters, taxis, rideshare, or just walk, despite those options being more time consuming in many cases.

Given the choice, people want more control over their lives, it seems.

Why Do We Keep Ignoring This?

And yet the anti-car crowd doesn’t want to acknowledge that people want control. Yes, even EVs are bad in some ways. I get it. Congestion, little bits of rubber flaking off tires constantly, and the “long tailpipe” can’t be solved by electrification. A car is still a car.

But telling people they’re bad for choosing the EV over transit doesn’t change anything. Even cattle don’t enjoy being pushed around like cattle. Don’t believe me? Go visit a dairy farm sometime. The cattle prod (a device that works, in principle, the same as a taser) was invented for a reason. You literally have to torture cows with electrocution from time to time to get them to accept the complete lack of control over their lives.

But somehow humans are supposed to accept the experience of things like the TSA and public transit. As it turns out, us and the cows aren’t that different at times.

One doesn’t even need to be the one doing the driving for the experience to be more compatible with human nature. Like Neo in the second Matrix film, we are a lot more comfortable with machines we can unplug than machines that control us, even if unplugging the machine isn’t an option.

Take Autopilot for example. Yes, we are handing over control to a machine when we engage it, but we can get that control back by shaking the steering wheel a bit or tapping the brake pedal. The car is doing the driving, but we care still ultimately in control.

Even without autopilot, drivers don’t have a lot of control, especially in cities. There are rules of the road you have to follow or people with guns will shake you down for money like highway robbers. Fight them and you’ll either get put in a cage or killed.

But then again, we still have more control than the people down below on the subway. Radar detectors, Waze, and just keeping your eyes out for police and the places they hide can keep the fuzz away in most cases. Some people do this for dozens of hours at a time setting record times crossing the country and get away with it.

Even if you’re the kind of person who strictly follows the rules whenever possible, you can still pick your route and go a different way if you decide to. You can leave 5 minutes early or 20 minutes late if you need to, and the car is there ready to go no matter what time you arrive at the car’s “station.” The same applies for a bike, a scooter, and your feet.

The fact that electric cars are growing shows that many people value the environment, but also value control over their transportation. The subway and the bus have never been cool, but a Tesla turns heads, especially in places where they aren’t common <cough>El Paso</cough>.

Also, look at the success of scooters. It’s said that money can’t buy love, but my grandfather says that money can rent a reasonable facsimile of it. He has a point. You don’t own the scooter anymore than you’re married to a sex worker, but people still enjoy that more than they enjoy vows of celibacy. From the time you turn the Bird or Lime or Whatever to the time you park it, you’re in control of the thing enough for people to want to spend money.

Bike sharing works the same way, and it’s having a fair amount of success, too. Ofo (the yellow bikes) failed because they couldn’t keep people from stealing the bikes, especially the homeless in some areas, but other systems with better security and/or docks are doing better.

While lots of bad is said about “rideshare” companies like Uber and Lyft, they were doing fairly well before COVID came to town. They’ll likely recover pretty well afterwards.

Electric bikes are booming, especially with COVID keeping rideshare down. Not only do you get the control of ownership with an e-bike, but you don’t show up to work in need of a shower like you might with a regular bike.

What do these things all have in common? People get some control over the experience. They aren’t pushed around and herded like cattle. You don’t have to worry about cellular service being cut off if there’s a protest or riots nearby, and you don’t have the indignities that accompany air travel.

Appreciate CleanTechnica’s originality? Consider becoming a CleanTechnica member, supporter, or ambassador — or a patron on Patreon.

Sign up for our free daily newsletter to never miss a story.

Have a tip for CleanTechnica, want to advertise, or want to suggest a guest for our CleanTech Talk podcast? Contact us here.

Jennifer Sensiba Jennifer Sensiba is a long time efficient vehicle enthusiast, writer, and photographer. She grew up around a transmission shop, and has been experimenting with vehicle efficiency since she was 16 and drove a Pontiac Fiero. She likes to explore the Southwest US with her partner, kids, and animals.

Do you think I’ve been helpful in your understanding of Tesla, clean energy, etc? Feel free to use my Tesla referral code to get yourself (and me) some small perks and discounts on their cars and solar products. https://www.tesla.com/referral/jennifer90562