Phoneweek
Phoneweek > Cars > UK car insurance groups explained: what do they mean for you and your car?
Cars

UK car insurance groups explained: what do they mean for you and your car?


Paying for insurance is one of the more painful elements of the car ownership experience, but it’s a cost everyone has to take on the chin. It’s illegal to drive without insurance, and anti-social too, but that doesn’t mean you can’t take steps to reduce your car insurance premiums – and that’s where car insurance group ratings come into play.

Simply shopping around is one obvious way to make sure you’re paying cheap insurance prices, as there’s often a big disparity between the cost of the most expensive and cheapest cover. The difference usually boils down to the type of protection and the extra services that competing insurance policies provide. You can often also adjust your premium by taking more or less of the risk via your excess – the amount of any claim you have to pay yourself – and limiting your mileage. Parking off-road, keeping your car garaged, and even living in a more – or less – theft-prone area will affect policy prices too.

Your age, gender, job and driving record also play a part in insurance policy calculations, and it’s harder to change any of those! You could change your car though, to a model with a lower insurance group, and potentially save hundreds of pounds.

What are car insurance groups?

Car insurance groups are the basic tool the insurance industry uses to set your premiums. We’ve had them since the 1970s, when they were introduced to help simplify the process of getting quotes, and to help the industry judge the risk involved when setting premiums.

Insurance groups are fixed independently of the car manufacturers, and based on assessments by the ABI of how easily and cheaply repairs can be carried out after an accident, and the level of performance as an indicator of the potential for having the accident in the first place.

How are insurance groups calculated?

The ABI works in conjunction with vehicle security and repair expert Thatcham to compile the insurance classifications for UK cars. The two main areas of research are how much damage a car sustains in a collision and how cheap and easy it is to repair after an incident. The experts factor in a number of points when setting an insurance group, including:

Data for these comes from Thatcham’s own tests, although in the case of parts and labour these prices are sourced directly from the vehicle manufacturer.

Once all of these factors are taken into account, Thatcham then classifies each new car into the 1-50 insurance groups, and then a security rating is given. At the top end, cars with excellent security features, such as can move into a lower insurance group, while vehicles with poor security are placed into a higher group and therefore the cost of insurance is increased.

What else determines a car’s insurance group?

Thatcham also tests vehicle security, according to the New Vehicle Security Assessment programme. Theft is still one of the chief reasons for an insurance claim, so the security of a vehicle will qualify it for a lower insurance premium. Thatcham breaks down cars with the following suffixes after a car’s insurance group number:

Another way for a car to improve its insurance group rating is by offering a high standard of safety. If autonomous emergency braking is fitted as standard, for example, a vehicle can drop one group once it’s been tested by Thatcham. Other advanced active safety aids can also have a positive effect on the insurance grouping of a car, as long as they are standard-fit equipment.

Manufacturers play a further part in determining insurance costs. High parts prices or labour rates at dealerships are taken into account when deciding a car’s grouping. So if one manufacturer’s dealers are more expensive, its cars could creep up the scale – even in cases where cars are mechanically similar. For example, the Audi A3 and Skoda Octavia have similar running gear, but the Audi has insurance group ratings from 18-45, while the Octavia ranges from 13-30. 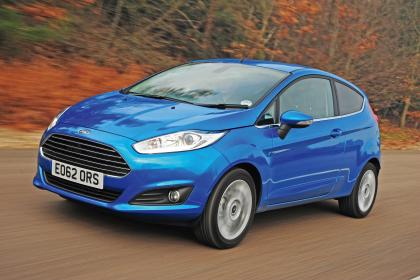 Different versions of the same car will also be in a range of insurance groups, as engine performance and trim level affect premiums. A base level Ford Fiesta Studio fitted with the 1.25-litre engine is way down in group 5, but the same car in Titanium X trim with the 125bhp 1.0-litre EcoBoost engine is in group 16.

When the group system was established over 40 years ago, cars were classified in just nine insurance groups. In 1992, this was increased to 20, but with ever-increasing diversity in the new car market, the current 50-group system was introduced in 2006.

Vehicles from the 10 years prior to the new system being introduced – 1996 or later – are classified according to the same 50 groups as new cars are today. For cars built before 1996, premiums are calculated based on an insurer’s own experience.

What do insurance groups mean to me?

Broadly speaking, the higher the insurance group, the more expensive insurance will be. You can check out the cheapest cars to insure here – these are all cars with a rating in group 1-3, so should be affordable to insure.

However, it’s not quite as simple as that. Insurers aren’t bound to follow the ABI guidelines that Thatcham sets, and will use their own judgement and experience to decide how much to charge customers. For example, a stereotypical ‘boy racer’ car will attract a higher premium than one that’s more staid and sensible – even though the two vehicles might be in the same insurance group.

This can hit young drivers especially hard – the few cars that a 17-year-old can afford to buy and run will have their insurance costs pushed up even further as the insurer will have past experience with these cars being involved in collisions.

That’s why it’s important that insurance groups aren’t the only factor when choosing a new car. Be sure to obtain actual insurance quotes rather than simply comparing on insurance group – you might be surprised how much two similar cars can differ on insurance costs. And of course, research heavily. It could be worth taking a small hit in terms of insurance cost for a car that will save money elsewhere – with excellent fuel economy, for example.

What cars are in car insurance groups 1, 2, 3  and 4?
As you might imagine, it’s small cars that are cheap to buy and repair that populate the lower car insurance groups in the scale. In group 1, you’ll find models like the Skoda Fabia, Nissan Micra and Hyundai i10 but it’s crucial to remember that insurance group placement is determined according to the specific model, engine and trim level you’re buying. While the cheapest, least powerful Ford Fiesta might be in insurance group 1, the more expensive, better equipped and faster models that you’ll encounter as you climb the range will be in progressively higher groups attracting bigger insurance costs.

What cars are in insurance Group 50?
Bearing in mind that it’s basically cheap cars in the lowest insurance groups, there are no prizes for guessing the kind of cars in insurance group 50. Top end luxury saloons, SUVs and sports cars get the top insurance grouping but owners of Bentley Bentaygas, Audi R8s and Mercedes-AMG GTs will probably have the cash to shoulder the extra insurance burden. At the very top end of the market, owners of exotic supercars from Ferrari, Lamborghini and even more exclusive brands will often employ the services of an insurance broker to help keep the cost of insurance in check.