With its first ID.3 delivery done, Volkswagen plans 40 deliveries this weekend in Wolfsburg alone. It also reported more than 25,000 binding contracts for the model.

Originally slated to begin ID.3 deliveries by mid-2020, Volkswagen pushed back the target amid reports of software issues.

The ID.3 is the first in a pipeline of cars built from the ground up to be electric and for the mass market. The Volkswagen brand plans to build 1.5 million electric cars by 2025, part of the parent Volkswagen Group’s ambitious “electric offensive” against Tesla.

The ID.3 hatchback will skip the U.S., but a larger ID.4. electric crossover will make it here. The ID.4 entered production in Germany last month, with an unveiling set for the end of September.

Meanwhile, Tesla is planning to ship Model 3 cars made in its Shanghai factory to Asia and Europe, sources told Bloomberg.

The company only exports from California currently. Tesla has been cutting prices in China to boost sales there, Bloomberg said.

VW has made smaller batches of electric vehicles before. But the new ID family is the backbone of the German company’s ambitious EV plans, as the world’s biggest auto companies are preparing their most aggressive push to date on EVs.

Its ID.3 electric hatchback, inspired by the iconic Golf compact car, is aiming for the mass market and priced lower than the older electric Golf while providing a longer range of up to 340 miles. 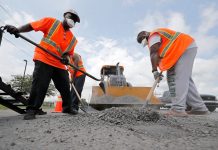 How Tesla Battery Day can silence critics once and for all