Volkswagen last week shared its concept for how some electric vehicles will get recharged in the near future. The vision involves a fully autonomous mobile charging robot that can be used in existing parking structures such as garages and other limited-access facilities. This approach is critical in cities where creating stand-alone electric charging facilities can be hampered by space availability or new construction restrictions.

VW hopes the robot system and other ideas will provide greater and easier access to EV charging. “A ubiquitous charging infrastructure is and remains, a key factor in the success of electric mobility. Our charging robot is just one of several approaches, but is undoubtedly one of the most visionary,” explains Thomas Schmall, CEO of Volkswagen Group Components.

VW demonstrates the prototype robot in a video. The charging robot—started via a smartphone app or Car-to-X communication—operates totally autonomously, reports VW in a company news release.The robot independently steers to the vehicle to be charged and communicates with it: from opening the charging socket flap to connecting the plug and decoupling it. The entire charging process takes place without any human involvement whatsoever.

To charge several vehicles at the same time, the company reports that the mobile robot moves a mobile energy storage unit—basically a large battery—to the car and connects the unit. The battery charges the vehicle, while the robot grabs another unit and repeats the process. Once a vehicle is fully charged, the robot independently collects the mobile energy storage unit and takes it back to the central charging station. Volkswagen states that the mobile charging robot has successfully reached prototype status, and further development for the project will continue. VW also remarks that a flexible quick-charging station will be launched onto the market early this year.

EV sales are setting records in Europe, with electric passenger vehicle sales crossing the 1,000,000 mark for the 12 months ending in November 2020, according to eTransport News.  The VW’s ID.3 has been a hot seller in Europe to the point that in The Netherlands, the ID.3 outsold the Tesla Model 3 at an astonishing rate of 75 to 1 during October. The larger ID.4 is scheduled to launch in both Europe and the U.S. this March. The ID.4 will be the company’s sole mass-market EV in the U.S., while Europe will get the more stylish ID.5 couple sometime in the future.

NEXT:  Here’s Everything We Know About The Cadillac Celestiq

Dave Goldberg is a lifelong auto enthusiast. While he leans towards European wheels for his personal driving, Dave gets excited about everything from Acura to Zagato.

ALSO READ  3 of 6 stolen cars recovered, but 'we still need your help'

Infrastructure Improvements to Get More Electric Cars on the Road 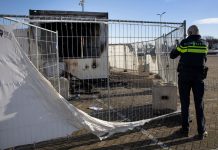