Volkswagen has employed a range of “progressively more innovative” arguments to claim the software fitted to millions of its vehicles is not a defeat device designed to cheat emissions tests, the high court has heard.

Lawyers representing more than 90,000 UK customers are bringing the biggest class action of its kind in Britain against the carmaker over the dieselgate emissions scandal.

VW admitted in 2015 to having manipulated the systems in 11m vehicles worldwide to fool emissions tests. It pleaded guilty in the US two years ago to criminal charges and paid out $4.3bn (£3.3bn) in civil and criminal penalties. In Australia it settled a multimillion-dollar class action which involved an agreement to pay between $87m and $127m in compensation to customers.

In the face of the allegations, the VW CEO, Martin Winterkorn, apologised on behalf of the company, saying: “I personally am deeply sorry that we have broken the trust of our customers and the public. We do not and will not tolerate violations of any kind of our internal rules or of the law.”

But in Europe VW is still denying the software in question was an illegal defeat device – despite German regulators having ruled in 2015 that the software was designed to cheat emissions tests.

Lawyers for the UK customers opened a class action against VW in the high court on Monday.

In 2015 the company admitted fitting the software to 1.2m of its vehicles in the UK, and rolled out a “fix” to make cars compliant with emissions laws.

But VW’s case in papers submitted to the court is that this software was not designed to breach the legal testing regime and was therefore not a defeat device.

ALSO READ  Do Americans Have An Appetite For Electric Cars? - NPR

Tom de la Mare QC, representing VW’s customers, said in written submission to the court: “VW have raised a range of progressively more inventive arguments as to why the software function is not a defeat device – arguments which have changed over time, and have been been deployed selectively before different courts and tribunals.”

De la Mare said the vehicles were “optimised to minimise the amount of pollutants” in emissions tests, meaning they operated in a “completely different way in the street to how it operated in the test”.

“It is difficult to think of a more obvious cheat than the one VW used,” he added.

The Department for Environment, Food and Rural Affairs estimates exposure to nitrogen dioxide has an effect on mortality equivalent to 23,500 deaths annually in the UK.

De la Mare said internal VW documents showed that the company had “long known that the software was unlawful and indefensible”, pointing to one document in which a VW employee said the vehicles would “flunk” emissions tests without the software.

He submitted that the documents showed a “clear acceptance that the software was the only basis on which they were meeting the emissions limits”.

De la Mare warned that if the court ruled in VW’s favour, it would leave the regulatory regime “toothless in the face of a major fraud of precisely the kind it was surely designed to prevent”.

VW said in a statement: “Volkswagen Group maintains that there has never been a defeat device installed in any of its vehicles in the UK.

“The question the judge is deciding in this hearing is not whether the affected vehicles contained such a device, but whether the legal definition is met in certain circumstances. We will continue to defend robustly our position in the high court.”

Dieselgate became public in September 2015 when the US Environmental Protection Agency revealed how VW and Audi had violated the Clean Air Act, leading to investigations by government agencies around the world in the biggest scandal to hit the car industry in decades.

In January former Volkswagen CEO Martin Winterkorn and four others were charged in Germany with fraud in connection with the emissions scandal. Winterkorn has denied any personal involvement with the scandal, and the case is not expected to take place until next year.

Flying the friendly skies with a little help from HEPA filters

Driver hits patrol car, clips officer with door while fleeing from him 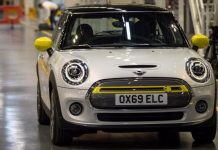 A year since Mini unveiled its new designs

Letter: CHOP zones the wave of the future | Letters – Standard-Examiner