When I ran my last piece earlier this month on the not-so-surprising progressive state of the VR industry, it was intended to shake up the naysayers nest, which for its part pervades with the mistaken notion that the immersive market is somehow suffering or failing. The facts, I argued, point exactly in the opposite direction, but in order to agree they have to be willing to revisit and revise any vestige of false narratives that might be influencing their view of the landscape.

Naturally, there are parallels to be drawn in what is happening on the other end of the immersive spectrum; in the land of AR. It’s true that, according to Gartner, AR appears to haven’t moved very much since last year, despite the emergence of mobile AR platforms, ARKit and ARCore, that have for their part imbued all of our smartphones with the environmental awareness to drive mainstream AR.

And that makes perfect sense if you hold on to some perspective on the accelerated timelines in motion here and consider that, although the tech is all but ubiquitous in its potential of being immediately realized, the app developer community, which is comprised of mere organic humans still operating under organic time, just hasn’t had enough breathing room to catch up.

They need the same amount of relatively generous wiggle room that the VR developer community has had to learn (and continue to learn) the new playbooks, rules, and best practices that govern what good AR content means. That said, its pace will likely be much quicker and, as market research firm SuperData recently forecasted, the AR market is expected to overtake its older sibling in revenues by 2021.

“Right now, both the hardware and software are very optimized and purpose built. You have both hardware and software that is well suited for specific tasks, applications, and implementations, but no general purpose solutions. This limits AR’s ability to be more broadly and easily be adopted.” said Tuong H. Nguyen, a senior principal analyst at Gartner.

We are only now seeing the arrival of authoring tools like Adobe’s Project Aero, the sort of platform that will be key in accelerating the learning curve, offering creators quicker accessibility in dabbling up digital sprites without the need to train up in using gaming engines like Unity. It is the same pattern as in VR, where authoring tools rise up with the sort of democratizing effect that greases the wheels in onboarding creators over from incumbent platforms.

It would of course also be strange for me to leave out my standard plug-in for the upcoming WebXR API and how it will additionally open up AR to the web developer community in the same fashion as mobile AR has opened it to app developers. When this medium for frictionless AR does arrive, either by the end of this year or early next, anyone, anywhere, with a smartphone will be able to immediately load up AR experiences into their otherwise ordinary lives simply through their browser. Imagine AR without the need to download or install anything. All the industry has to do is prioritize web-based AR as a first-class citizen.

But this is all relates to the broad reaching, mainstream, AR applications that reflects the digital transformation we are all anticipating, and doesn’t at all take away from the fact that the enterprise sector has already made very real strides. In the past two years, enterprise AR has graduated from experimental tinkering to become a validated implementation that is very much now a permanent best practice for industrial operations.

In other words, if you are a leading corporation and you don’t already have AR looped into your business lines, congratulations, you are a dinosaur, particularly because it will be vital in leveraging the advantages of adjacent technologies like IoT. Last week, for instance, a report released by PTC and the Aberdeen Group stated that 67 percent of the enterprise AR users surveyed pair it specifically with IoT in order to conduct remote repairs.

“This can come in both the form of task itemization as well as see-what-I-see remote expert guidance scenarios. Some technology elitist/purist might claim this isn’t “true” AR, but I think of it as existing on a spectrum; with this use case easier to deploy *and* capable of demonstrating value for a wide variety of organizations.” Nguyen said.

Take again the Capgemini “Augmented and Virtual Reality in Operations” report that I showcased in my article on enterprise VR, which details a number of use cases in which AR consistently drives higher productivity and efficiency levels by allowing companies to streamline workflows for a wide variety of manual tasks. 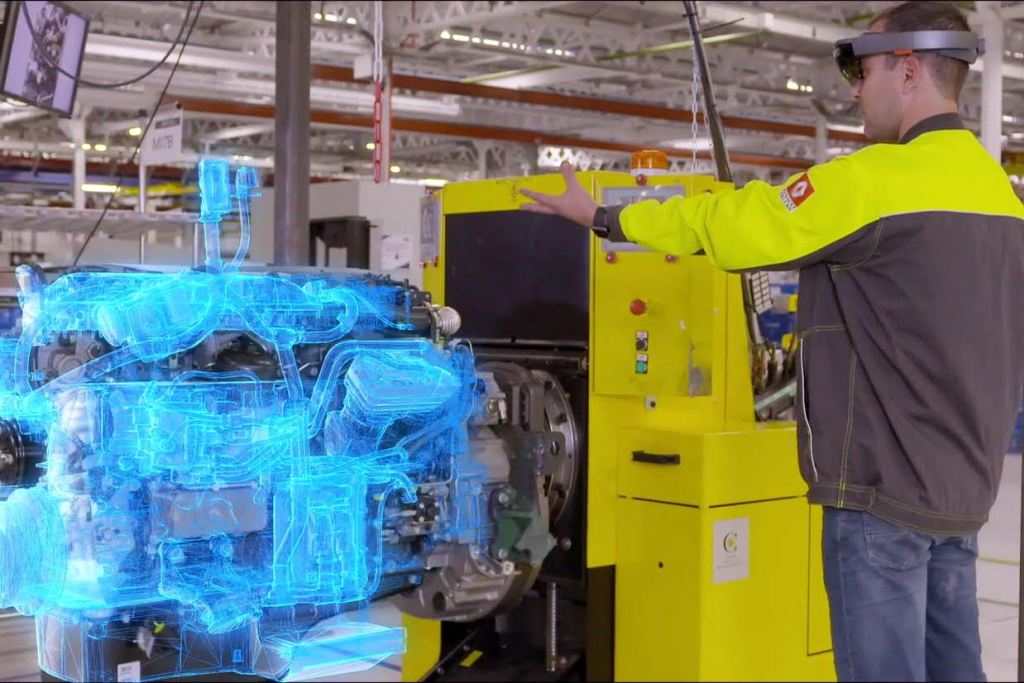 Nicolas Ribeyre, the head of technology and sectorial watch at Laval Virtual, shares some additional automotive AR use cases from the recent Paris Motor Show and Mondial.TECH Paris conferences, illustrating how AR has become a widespread best practice for the industry.

In terms of the ever-fragmented platform of choice, a recent survey by Digi-Capital and Augmented World Expo (AWE) indicated that companies currently value mobile AR (76 percent) somewhat more than they do smartglasses (65 percent), which is understandable given how mobile AR taps into massive pools of developers and users alike with a well-paved infrastructure that can immediately plug it into a market of billions.

J.C. Kuang, an analyst at VR/AR market intelligence firm Greenlight Insights, says that mobile AR is poised to continue a pattern of dominance over smartglasses mostly due to the following factors: 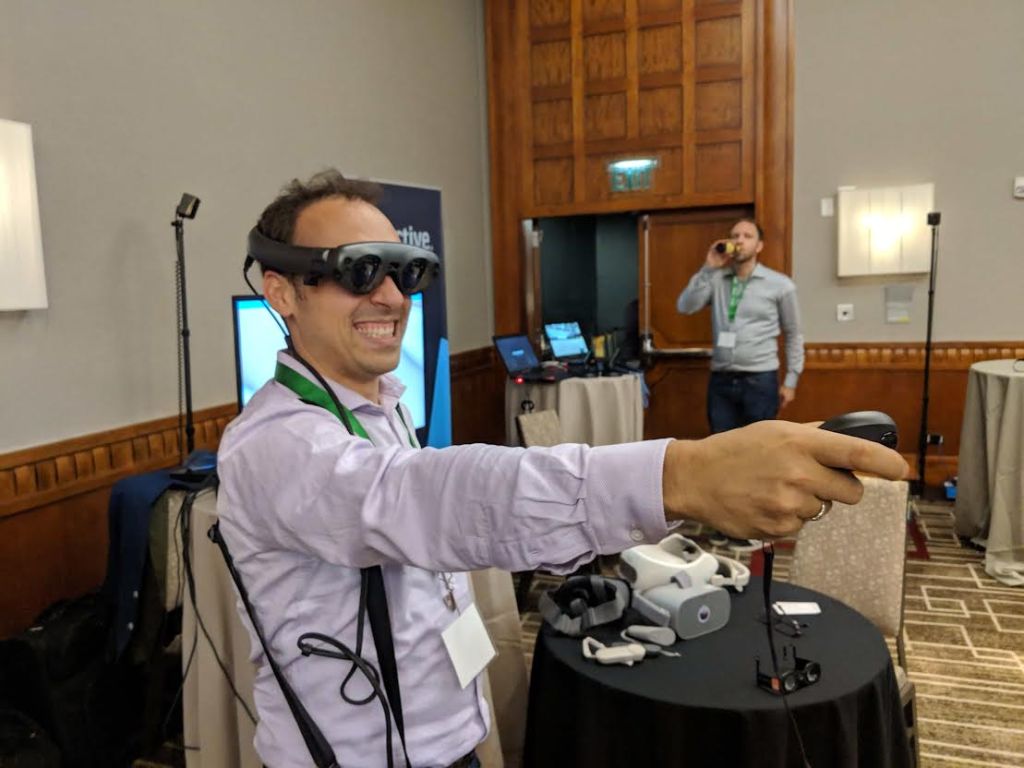 Above: Magic Leap One showcased at XRSWeek.

As enterprise continues to double down on its implementation of AR as a critical use case for a broadening range of its operations, the consumer market and its creator community has time to ramp up on mobile AR and prepare for the official arrival of the WebXR API. But, perhaps even more interesting, is that it also stalls for time as a much more foundational framework, namely the AR Cloud, begins to take form, promising super powers for the immersive tech that are altogether unique to it.

Largely the brainchild of Ori Inbar, an AR entrepreneur and investor who founded AWE, the “spatial wikipedia” of immersive objects draws on the same underlying premise as Cloud Anchors insofar as it envisions a shared omnipresent AR experience that permeates our surroundings and world, permanently. Such a shared spatial infrastructure would allow for users, businesses and creators to co-create and co-experience AR in-sync to one another, as well as serve as a converging point for all of the competing apps, services, and platforms.

Amir Bozorgzadeh is cofounder and CEO at Virtuleap, the host of the Global WebXR Hackathon and the startup powering up the Gaze-At-Ratio (GAR) XR metric.