Sony recently launched the Xperia PRO 5G, a $2,500 smartphone for creators that packs a couple of unique features. The device features a micro HDMI input that will let you connect it to your camera and use it as an on-camera monitor. Additionally, thanks to the device’s 5G capabilities, you’ll be able to stream video right from your camera without needing any separate streaming accessories. But since its price tag puts the Xperia PRO 5G outside the reach of many buyers, Sony is now rolling out similar capabilities to the Xperia 1 II and Xperia 5 II with their Android 11 update.

Sony started rolling out stable Android 11 to the Xperia 1 II late last year. While the update changelog didn’t include any mention of the aforementioned features, a recent post from u/shenfan0613 on Reddit reveals that the company has, in fact, added external monitor capabilities to the Xperia 1 II with the Android 11 update. The post includes an image highlighting the new feature, which reveals that it will let users connect their Xperia 1 II to a supported Sony Alpha camera and use it as an on-camera monitor. To use the new External Monitor feature, you will have to connect your Xperia 1 II to a supported camera using a USB Type-C to HDMI cable. 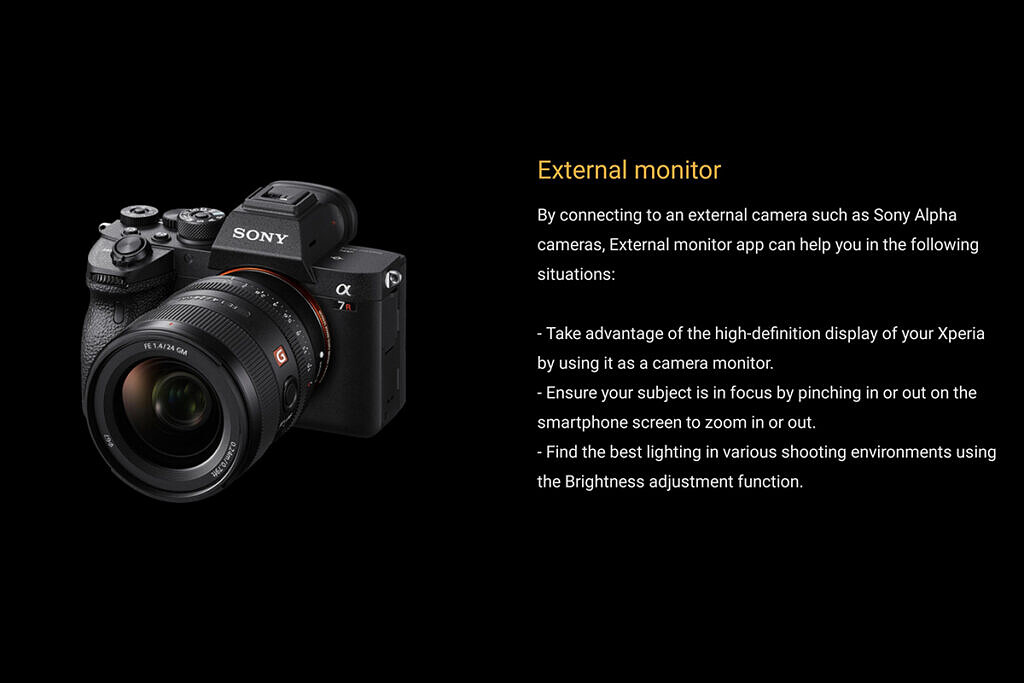 It’s worth mentioning that a video about the Xperia 1 II’s Android 11 update shared by the official Sony Xperia Taiwan YouTube channel also highlights this feature. You can watch the timestamped video below.

Although the post doesn’t state whether a similar feature will roll out to the Xperia 5 II with its Android 11 update or not, we have reason to believe that the feature will be available on the compact flagship. Sony recently shared a press release highlighting a firmware update for the Sony ZV-1 camera. The firmware update brings a couple of new features to the vlog camera, including the ability to connect it to a PC via USB and use it as a high-res webcam.

Additionally, the firmware update brings a new feature that will let you connect the camera to a supported Xperia smartphone and use the smartphone as a secondary display to monitor your live stream and read the chat. The fine print at the bottom of the press release clearly states that this feature will be available on the Xperia 1 II and Xperia 5 II running Android 11. Therefore, we suspect that the External Monitor feature will also be extended to the Xperia 5 II with its Android 11 update. Sony has already started rolling out stable Android 11 to the Xperia 5 II in select regions. We’ll update this post as soon as we confirm External Monitor availability on the device.

In case you have received the Android 11 update on your Xperia 5 II, make sure to leave a comment if you’re able to spot the new External Monitor feature on the device.